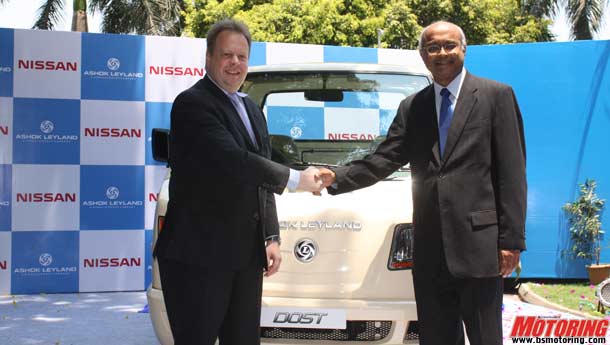 Ashok Leyland, which rolled out its light commercial vehicle (LCV) 'Dost' on Friday last, has set a target of 140,000 vehicles for the next three years. Though the 'Dost' was jointly developed along with its Japanese partner Nissan, it was manufactured at Ashok Leyland's Hosur facility. The two partners are betting big on the new premium vehicle segment.

According to V Sumantran, executive vice chairman, Hinduja Automotive Ltd, and chairman, Nissan Ashok Leyland Powertrain Ltd, the the new vehicles will be on three different platforms and the two companies will sell the products on their own respective brands.

“India is one of the key markets for our growth and the joint venture would mark Nissan's entry in the low cost segment,” said Palmer.

Sumantran said Nissan's vehicles would not be displayed in Leyland's network and vice versa. He added that Ashok Leyland's focus had been on commercial side, while Nissan's has been more on the personal segment.