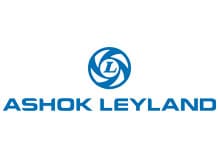 The Hinduja group promoted Ashok Leyland Ltd (ALL) has lined up several products in the intermediate commercial vehicle and medium duty vehicle segments apart from the Neptune engine for multi-axle haulage vehicles in the current fiscal.

The company said it was focusing on the operational excellence front without losing sight on its long-term goal, which is to be among the top 10 truck and top five bus manufacturers globally.

The new launches include A-Truck model featuring Avia cabin to give further impetus to company's plans in the growing intermediate commercial vehicle space and the in-house developed Neptune engine, which is ready for deployment. Besides, launching the N-Truck with a new cabin, the company will also shortly introduce the CNG version of LCV Dost in the Delhi market.

The new passenger version on the Dost platform; the goods and passenger versions on the multi-functional van Stile and the six -tonne Partner are slated to hit the Indian roads during this fiscal.

Indicating his vision to shareholders, Dheeraj G Hinduja, chairman of Hinduja said, "...going forward, there are shades of opinion on how the global and Indian economic scenario will unfold and in what time frame the recovery would take place. However, ALL is well apprised of this evolving scenario and is ready for any eventuality."

"Although the forecasts for 2013-14 are not encouraging, ALL is targeting to position new products in anticipation of brighter prospects of the business," said Hinduja.

The company said the year saw a slowdown in the Indian economy with a consequent adverse impact on the commercial vehicle industry.

While the overall volume declined two per cent on a sustained year-on-year basis, the medium and heavy duty segment had clocked a 25 per cent drop.

Despite the slowdown, ALL increased its market share from 23.5 per cent to 26.5 per cent in the M&HCV segment.

The company sold 70,916 M&HCVs in the domestic market, which was 13 per cent less compared with the previous year.

The company exported 8,778 vehicles in 2012-13, 32 per cent lower than the previous year. Sri Lanka, a key overseas market, fell by over two-thirds compared with the last year.

However, the company grew in other regions across the world, notably in the West Asia, where it registered a growth of 15 per cent. It is betting big on Kenya.