A moment of silence, please, for the world’s cheapest car, which has all but died in India. It was almost 10 years old.

The Nano’s death was confirmed by production numbers: Tata Motors Ltd. produced 1 unit in June, down from 275 in the same month last year. Exports were zero, versus 25 in June 2017. The company acknowledged that the car in its “present form cannot continue beyond 2019.”


The expiry of the “people’s car,” as Tata Motors branded it in 2008, holds lessons for automakers hoping to make it in India: While consumers may be value-conscious, cutting costs to the bone in pursuit of a gimmicky claim to fame is no use if the end result is a second-rate vehicle with a tendency to catch fire.


The Nano’s failure to sell stands in stark contrast to the rest of the Indian car market. From motorbikes to cars and trucks, growth in every segment is picking up. Passenger vehicles, including SUVs, jumped 38 per cent in June. Commercial vehicles climbed 42 per cent, while two-wheelers – which dominate the market – gained 22 per cent.

Maruti Suzuki India Ltd., the nation’s biggest carmaker, posted volume growth of more than 40 per cent. Even a newly defined segment, the quadricycle – a vehicle that weighs less than 475 kilos – is showing signs of an uptick.

This is a market where electric vehicles are non-existent and the chatter over fancy ideas such as future mobility and autonomous vehicles, which pervades the rest of the auto world, is muted.


Still, Indian automakers have tried to get innovative. A widely held view is that they have largely misread the value-oriented psyche of a proud and aspirational middle-class, which scorns handout-like product propositions.


The much-touted Nano – hailed as a “milestone in frugal engineering” – fell short on safety, ran behind schedule and produced questionable crash test results. Eicher Motors Ltd.’s  Multix pickup truck that doubled up as an electricity generator was also unsuccessful. Both companies have written off millions of dollars in investment costs.

ALSO READ: Is the world's cheapest car finally dead? Only one Nano produced in June

Tata remains hopeful: A spokesman for the group said the Nano “may need fresh investments to survive.” Yet the evidence suggests that pursuit of the lowest price above all else was misconceived. A more realistic view is that India is squarely a high-volume, few-models game and consumers are focused on value – which means getting as many features as possible for their money.


Large numbers haven’t led to price wars yet, and probably won’t for a while. Indeed, India’s car market has the brightest profitability outlook globally, according to Nomura Holdings Inc. analysts. 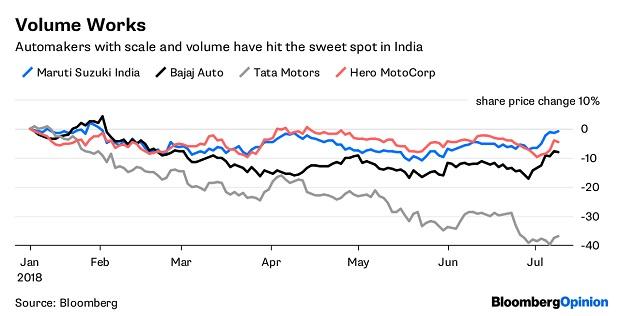 Take Hyundai Motor Co., for instance, which has the second-biggest market share after Maruti Suzuki. With some input costs rising, the South Korean carmaker has raised prices of several models and, after decades in India, has started repositioning itself as a high-end brand.

Maruti Suzuki is following a similar trajectory. The company has begun churning out higher-margin vehicles, with its Baleno, DZire and Brezza models now accounting for a larger part of the sales mix than the more basic Alto and Wagon-R.


The market leader continues to win out, with a share of close to 50 per cent across India’s various regions. Maruti Suzuki has been adding capacity and announced last week that it would produce another 750,000 cars over the next two years at its Gujarat plant.


Scale has protected Maruti Suzuki so far. The last time the likes of Volkswagen AG and other foreign carmakers entered the heavily protected Indian market, between 2011 and 2014, its share fell to 40 to 45 per cent. This could repeat on the margins if Maruti Suzuki doesn't keep up with the supply pressure. Demand is strong but waiting times are also rising for its cars. In such a market, volume is a good defence as long as it’s sustained.

Past follies will probably be repeated. The idea of recasting the Nano as an electric vehicle for fleet sales has been floated. That’s misguided. Ultimately, the barrier to electric cars is high costs, making the technology unsuitable for an ultra-low-price brand.

Meanwhile, the Indian government isn’t helping by wavering on its grand electrification plans. The high initial price gap means that “we do see a need for incentives to kick-start EV adoption,” analysts at Goldman Sachs Group Inc. note. This is probably why Maruti hasn’t waded into this market in a big way – it can’t do big numbers that make sense.


India may not be ready for the pizazz of futuristic vehicles. But it’s past the point of no-frills metal shells. In between, there’s a sweet spot where carmakers with the right strategy can do well.