Armaan Ebrahim vs Our man 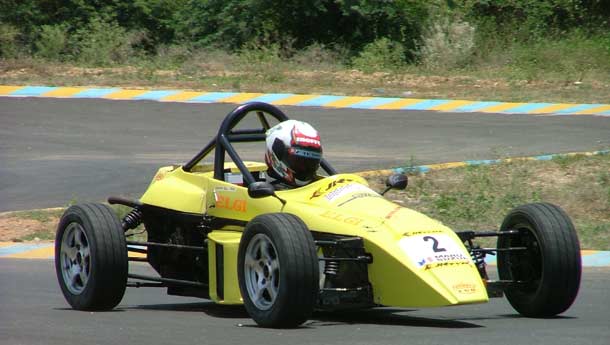 On a list of the next ten most important cities in India, Coimbatore probably figures in at twenty-nine. Yet, it happens to play host to the only other race track in the country. Thanks to the efforts of B Vijay Kumar and Akbar Ebrahim, the 50 acre microlight aircraft factory land that belonged to the great Karivardhan now gets the honour of doubling the number of race tracks in the country and taking our track to population ratio up to 1: 500 million.


Set up and managed by LG sports, the track is just over a year old and even boasts a racing school. But that’s beside the point. My mission for today,  besides getting to know the track or the Formula LGB, is to take on India’s Gen Next – Armaan Ebrahim. Now for those of you who never read our motorsport pages, Armaan is the current LGB champion and is racing Formula BMWs this year. Gulp! On to the track then.
Just getting in and starting the LGB is an event. With some practice, a very cool leap could be effected, but for the first few times it’s a case of lifting each leg high over the side and then sort of melting in. There is a five point harness to keep you in place, a master switch, a starter switch, an oil gauge, a tacho and er.. that’s about it. You don’t sit in this car as much as plug yourself in. Once that’s done, its time to get that 1300cc, 85 bhp engine to life. That’s when a minor explosion goes off just beyond your head and the amount of noise is enough to create some involuntary flinching. Now that’s what I call a free flow exhaust.

With intentions clearly signalled, five point race harness locked and first gear selected, it’s time to find see how manic me and the LGB can be. But there’s just one problem. The rear view mirror is filled by another LGB. And the driver appears to be gesticulating in such a way as to encourage a standing start showdown.

Hmmm. Time to show some one what ‘showing a clean pair of heels’ means. So I wave good bye and disappear up the road. Waitaminnit! That’s my imagination... the driver in the other LGB is Armaan Ebrahim.

Back to the stand-off then. With revs dialled in, first selected in the five speed gearknob (it’s too small to be called a stick) and accelerator foot hovering, we wait for 3-2-1 countdown. A raucous blare builds up to a piercing scream... and we’re off.

Pardon the drama, but there isn’t a better way to get off the starting grid. Give the LGB a healthy dose of throttle and it powers briskly off the line; floor it and it punches ahead furiously. Acceleration is instant, on the verge of brutal. and is accompanied by boisterous vocal responses from the intake and the exhaust. Before I can use up all the revs, the braking marker for the first corner (a downhill gradient that immediately tightens into a right-left chicane and opens up onto a short straight) is approaching fast. The car is relatively easy to drive – the clutch is light, gearchange is progressive and the balance is awesome. That entire complex is dismissed in second gear.

At the end of the short straight comes a fast sweeping right which leads into another chicane. At this corner, the rear end seems to be completely on the move and as I power through, the LGB squirms and wriggles over bumps and feeds me info about the grip and attitude through the seat of my pants. If that sounds scary, it’s not; it’s fabulous and you can feel the car alive and kicking, in a way no road going car can match.
The exit here is crucial and if you get it right you can hit 120k’s just before you start braking for yet another chicane that brings you on to the back straight. Next up is the hairpin and apexing it at the very end will set you up nicely for the two lefts that lead to the start-finish straight. Get it all together and you should be doing 165k’s by the time you start braking for the first corner again.

The LGB is gifted with a chassis that provides incredible feedback and oversteer is easily controlled. And 85 bhp pushing along just 430 kg is pretty fast. The steering feels just right and downloads high resolution images of the road onto your palms. It’s no point-and-squirt machine either. The front snaps keenly at corners while the rear needs watching, and as you start building up speed and attacking corners the rear feels almost too eager to see what’s going on up ahead.

As I start getting used to the track and the car, I find myself accelerating earlier, braking later and breathing harder when I realise that Armaan has started to pick up the pace and following him is becoming increasingly difficult.

On the last of my allotted dozen laps, I am peering through the sweat trickling through the corner of my eye and with the last corner and Armaan looming ahead, I give it everything I’ve got. I come out on to the main straight with the nose pointed towards the pit lane and me looking over my right shoulder. As I cross the finish line one last time my shoulders fall, my palms relax on the steering wheel and I realise I haven’t breathed for the last minute and as I come into the pit lane I have a childish smirk across my face. It’s a smirk that says I shouldn’t have done that, but I loved every second of it.

Who won? Hey! You don’t expect me to go around denting the confidence of India’s next bonafide track demon, now, do you?

Esteem
How powerful: 85 bhp
How fast: 165 kph
How good: Not too great if you want to move on to higher formulas. Class dominated by veterans and be ready to swap paint if you want to win.
How much: Costs vary with every tuner and is economical if you have your own car

Who’s your all-time favourite driver?
It has to be Senna. He is the greatest. I like Schumacher but I idolise Senna.

What’s your favourite car?
It’s difficult to choose between the Ferrari Enzo and the  Gallardo.

Who  will win in F1 this year?
Well, Alonso is doing well but after the last race (Imola) it is difficult to predict. You can’t count Schumi out yet.

What kind of music do you listen to ?
I don’t have a particular choice. I listen to whatever I like.

Do you follow or play any other sport ?
I play squash, but that’s just for fun. I used to play cricket as well but I have stopped that now.

If you would like to get a part of the racing experience, you can write to Akbar Ebrahim at akbarebrahim@yahoo.com