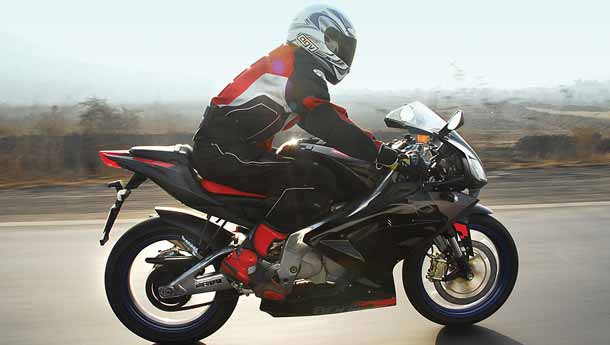 I’ve been secretly drooling over this machine at an imported motorcycle workshop in central Mumbai. Long before the VF750F was added to my garage, I chanced upon this beauty parked in a corner of the showroom with the shrink wrap on, odo at zero and the sky as the asking price. I made three trips back to the place in the name of taking another stroker off the owner’s chest, and three more to drool over this motorcycle and to convince the frail old man behind the counter to accept a cheque for a not so princely sum in return for the bike. He got my game, politely declined the amount and asked me not to waste my time and his by begging. This motorcycle was the finest example of a moving sculpture crafted from the choicest alloys on the face of the earth. It’s the best thing to come out of Italy after MV’s F4 Tamburini, (and Monica Belucci, says Shumi) and pepperoni pizza (food is important and I’ve been told the Ducatis aren’t that hot to ride). My friends, give it up for the Aprilia RS125.

See, that motorcycle on the shop floor had me mesmerised, and I was troubled that the gentleman didn’t give me a chance (read small discount) after which I would have walked away satisfied, knowing that I still couldn’t afford the machine. Now that I couldn’t have it, I had to have it. You know what I mean, right? So I dug up my big black telephone book and called a few people. Okay I lied, Shumi did that for me and that’s how we landed this shoot.We arranged to meet the owner, Sailesh Gala, on Mumbai’s Western Express Highway. Sriperumbudur would have been an appropriate location, but I was just grateful that this gentleman showed up, so I couldn’t ask for more. As we approached the rendezvous, the black silhouette shod with bluish-purple wheels sent my heart racing and splattered a grin across my face. Ah, the joys of being a poor motoring journalist.The RS125 isn’t a very big motorcycle. Actually, calling it small is an understatement, and it’s unbelievable how Aprilia have managed to pack so much into so little. The RS is actually a learners’ motorcycle. It’s the bike 18-year olds all over Europe ride for a few years until they grow up, become smarter and are licensed for bigger machinery. Those that are smart to begin with simply de-restrict their 125 and blow the socks off most other motorcyclists on bigger machinery. To sum it up, you could actually call it a European commuter, but then you’d have to call me Bautista, Alvaro Bautista.

It’s pretty evident that Aprilia’s flagship model, the RSV 1000, has inspired this motorcycle. From the front fairing to the anodised cross spoked wheels and the tail, the RS125 bears much resemblance to the RSV. The motorcycle is built with so much attention to detail, it’s almost like Aprilia hired designers to sketch out every little nut, circlip and rubber grommet that went into building the bike. Some bits just make it worth having, like the little gold anodised nuts, beautifully crafted triple trees, upside-down forks and the body panels that have a paint job that we’ll never get to see no matter how executive our execommuter class gets in India. And I haven’t even started tell you how it is to ride.Now let’s get down to business. The motorcycle is small, highly strung and has you committed in a racing crouch the moment you swing a leg over, but it still keeps you comfortable. The moment you grab the bars to thumb the starter, your eyes fall on a white sticker that says Junior GP – the reason the 2006 RS125 is so technologically advanced. Junior GP Racing Dream is an initiative of Aprilia and the Italian Motorcycling Federation to hone the racing skill of young Italians before they enter big league racing.

The RS125’s got a Rotax 124.8cc liquid-cooled two-stroke single plugged into it and in restricted, commuter/ learner trim is rated at 15 bhp. The engine, with all its orifices open, restrictive circuits bypassed and engine restrictors dumped promises to more than double the power output to 33 bhp. The motor on this bike, unfortunately, is restricted but is still quite a handful. The engine holds a steady 1100 rpm idle and putters around (and I say that with no disrespect) in traffic without much of a fuss. And that’s the good part. Wait till the traffic clears and the tarmac widens for a pure unadulterated two-stroke rush. The power kicks in at about 5500 rpm.

So until you’ve hit the powerband, you’re admiring Italian sculpture at its finest, figuring out the lap timer functions on the dash (see, I told you Sriperumbudur was the ideal location) and picturing yourself standing at the start line with Monica Belucci holding the umbrella. Then at 5500 rpm it all goes silent for a nanosecond, your hands grip the bars tighter and boom! The scenery is a blur, Monica is long gone and you’ve broken out into a cold sweat. Coming into the powerband is like toggling a switch. The action is very abrupt and leaves a vivid impression in your mind.The RS125 was built keeping young, inexperienced riders in mind. But Aprilia also wanted a machine for their racing series. That is why this machine is loaded to the top with performance goodies, is reliable and very appealing. It uses four opposed pistons (of variable size) and radially mounted brake callipers with a humongous 320 mm rotor. And if that isn’t advanced enough for you, how about aeronautical spec brake hoses. At the rear, a twin-pot calliper works on a 220 mm rotor. Never have I been so comfortable with shedding so much speed in such short distances – that’s how much feel the brakes have. And if that doesn’t impress you, take a look at the gold calliper and the rotor on the front wheel – you’ll be amazed at how sexy it looks.

The engineers at Noale built the RS125 around a cast aluminium alloy chassis that’s extremely potent and a direct descendant of the 125cc platform that Aprilia have been winning the 125cc GP class with. Upside-down forks damp the front, with a monoshock similar to Honda’s pro-link suspension at the rear. The motorcycle as a result is a bit stiff, but is a tremendous handler and forgiving at the same time. Very forgiving. I carved the motorcycle through whatever corner I could find and in one instance I committed to one particularly fast wide left hander with my knee at 90 degrees to the motorcycle, bum off the seat and fully leaned over – or so I thought. The RS at over 100 kph didn’t flinch and very calmly did what I asked of it. It was still at a fraction of its true handling potential, and I’m not even half-skilled enough to push it any further. And you should have seen Sailesh filtering through traffic; I could swear he was steering by telepathy.

I’m impressed, flattered and awed. I’m also regretting my big-four purchase decision. I mean I can sit back, munch miles and carry all my belongings with me, but that’s not half as much fun as putting on my leathers and riding lap after lap after lap around a racetrack. And this, my friends, is the ideal track bike, a perfect tool to fine- tune your every riding skill. So if I were King of the World, everybody would inherit an RS125 once they turned 18. I’m not. So I’m going to beg, borrow or try and get a loan to finance one for the upcoming trackday.

We’d like to thank Sailesh Gala for the motorcyle and Rupesh Thakkar for helping us make this shoot possible.