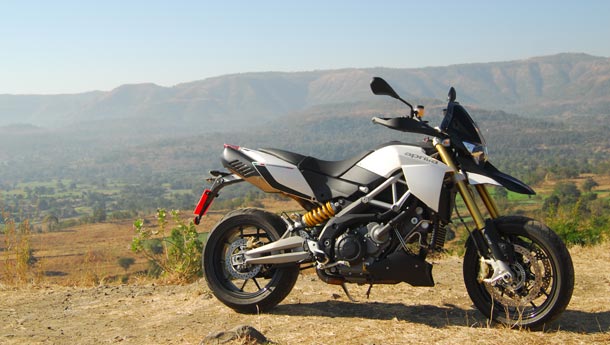 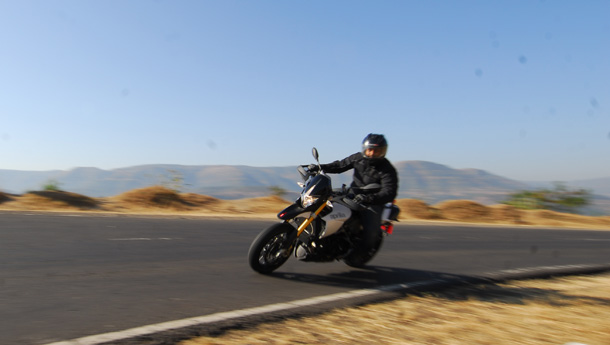 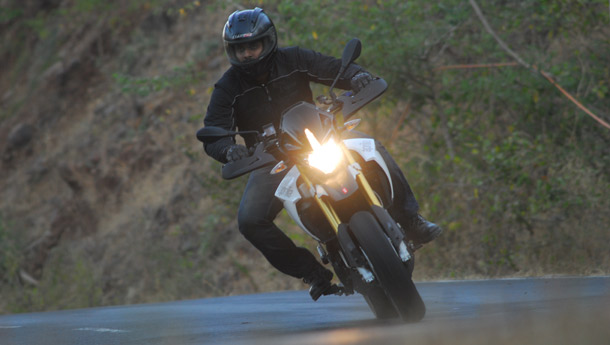 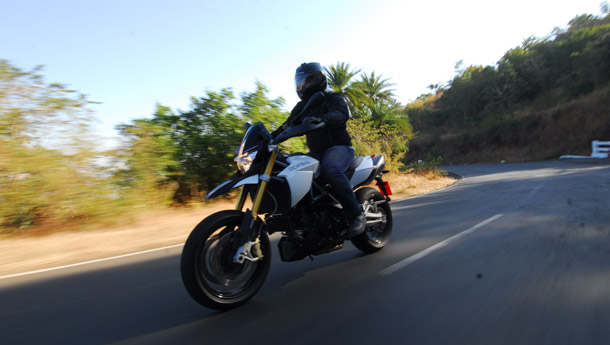 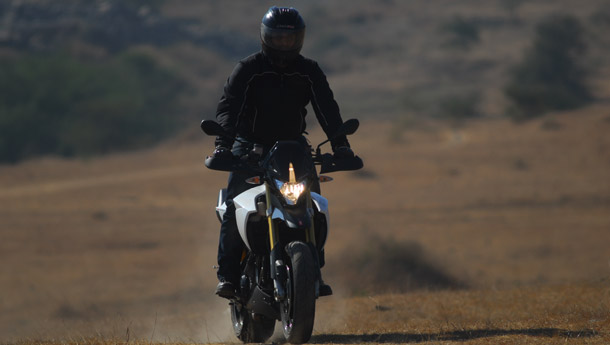 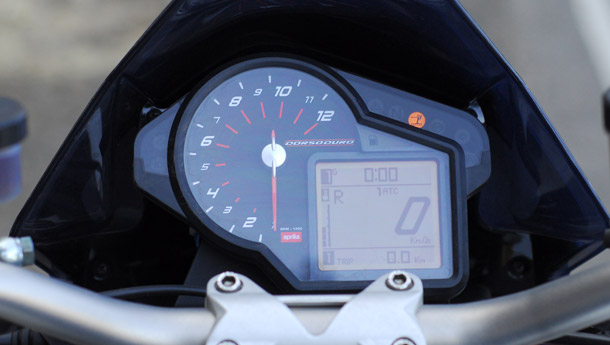 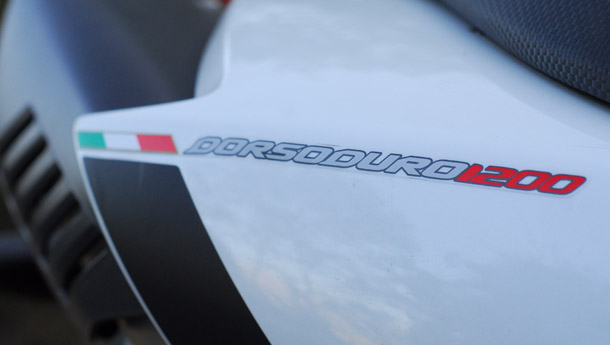 Multiple Personality Disorder. If there is one clinical condition this Aprilia suffers from, it’s the Dr Jekyll/Mr Hyde disorder and the trigger, strangely enough, is just a button. If it reads ‘R’ for Rain on the digital dash, this 1200cc, 130 bhp motard behaves likes a well-trained puppy, eating only its fair share from the food bowl and not barking at the neighbours when they come over with cookies. You can throttle out of corners joyously, pretending to be Max Biaggi. Its almost overtly friendly nature makes you a bit suspicious even, makes you wonder whether that chummy smile on its mug was masking some deceitful behind-the-back scheming.

Turns out, it was. I felt confident so, ‘T’ for touring was called for. Whoa, suddenly, the motorcycle grows some teeth and it starts gnawing at your foot. The pace is turned up, the anchors need to work harder and the only thing that’s stopping the rear from lighting up and spewing smoke is an electronic leash. A healthy dose of terror is thrown in to keep things exciting – think Martini with a spot of gunpowder. But slot it into ‘S’ and the bartender doesn’t hold anything back. Time for some fireworks. Suddenly, the throttle becomes a hair trigger and the safety net is off. So are the gloves. Thundering out of corners with devastating torque, the Dorsoduro is one very different and very wild animal as it wants to either slide, wheelie or both. All you’d previously conquered was a beast on a leash and when let out, it has its jaws lodged an inch deep into your skin, waiting for a chance to rip your whole head off. Bloody hell, this thing is wicked in the twisties! Ridiculously good fun but of the slightly scary sort, the genius of this big motard is that it can be a heady cocktail when you’re feeling courageous or a glass of milk when you’re not.

What is it exactly?

It belongs to a new niche of motorcycles called the ‘maxi motards’ – a very Euro-specific nook in a big motorcycle market. Though the recipe might sound quite simple, it’s a tricky little bugger to fine-tune primarily because its intended roles overlap a lot sometimes. The logic is that supermotos, however manic and exciting, are impractical to tour on, so here’s a bigger motard with a big-bore motor that has space for touring racks and such, but without compromising a whole lot on the point-and-shoot handling. Touring bikes like KTM’s 990 Adventure or BMW’s GS Adventure have more of a continent-crossing bias. In its own class, Ducati’s Hypermotard is just what the name suggests, leaning towards the motard side while Aprilia’s Dorsoduro tries to tread the path in between.

Styled by someone who previously worked on the sets of the Planet Of The Apes, within the Dorsoduro’s (relatively) sleek form nestles a unique race-derived frame where a steel trellis teams up with aluminium castings, lending the chassis incredible torsional stiffness. To complete it, 43 mm Sachs USD forks are deployed at the front and an aluminium swingarm is hooked up to an offset Sachs monoshock at the back, a setup that looks particularly tasty. On specifically the 1200, the Italians have gone in for Panigale-style lightweight cast aluminium rims – saving a massive 2.3 kg in unsprung weight – and top-shelf Brembo brakes that act quite literally like anchors. Thankfully, the sport-oriented ABS will save your butt if you overcook the braking. The wide, tall handlebars, perched-up seat, minimal cockpit, generous steering lock and the compact, lithe dimensions are trademark supermoto characteristics that complete the big 1200. To be honest, the eccentric styling is a lot nicer to behold in real life and the way I see it, it’s integral to the ludicrous nature of this motard. When it comes to injecting exquisiteness into even the detailing, the Italians convincingly take the cake. It is quite portly though, weighing in at 223 kilos at the kerb, despite losing some weight of late and being on a lightweight parts diet. But fret not, because the trademark 90-degree 1200cc oversquare V-Twin brings 130 bhp to the table, a good 35 bhp over even the best of the Hypermotard line-up. And it’s one cutting-edge liquid-cooled motor, with ride-by-wire throttle, selectable mapping and traction control. But enough technical mumbo-jumbo already, fire up that motor!

And it rides like?
It’s not quite as hyper a motard as the er, Hypermotard but it’s trying to build a nice bridge between a motard and a street touring machine. Though peak power comes in at 8700 rpm, there’s a deliciously thick wave of torque you can ride right off idle. Okay, delicious sounds way too tame; explosive is more like it. Rip it open in the bottom three gears and the front refuses to meet tarmac as it thunders its way towards the limiter. It’s not as rewarding in the stratosphere of the powerband but since the broad mid-range delivers such a kick up the backside, you aren’t left wanting. It’s a good thing, then, that post the introductions, you discover that it’s an easy bike to get on and ride fast. Since the heft is distributed well, it’s impeccably balanced whether you’re at 10 kph or 110 kph. A bit hesitant on turn-in, the 1200 with its reduced unsprung weight holds its line around corners with poise and gives you the confidence to push the pace, though it doesn’t quite display the immediate flickability and nimbleness of its lighter competitors. If you really start pushing it – or run it too hot – it gets out of its comfort zone with the front feeling like it will tuck under. But since that’s down to the suspension and you have full adjustability over it, all it will take is a bit of tweaking to mend it.

As you probably read at the start, the riding modes can completely transform the motorcycle and frankly, they’re more useful than you’d think. Engage the softer 100 bhp ‘R’ mode with a full electronic safety net when you’re in the city or in conditions with compromised traction levels. Heck, it even egged me on to take the big twin on light trails and despite the flab, it’s capable on fast trail runs as well.

At the other extreme, the Sport mode, where all aids are turned down and a full 130 horses come charging out, the Dorsoduro feels a bit too lairy and if you’re not careful, it will lurch wildly mid-corner. For all the hooligans out there, the electronic nanny will allow wheelies in Sport Mode only, so that’s the mode you need to be in. I found the Touring Mode to be the best compromise where full power is delivered but not in an overtly aggressive manner and you can exploit the power instead of being intimidated by it. Where it scores over the motards is long-distance comfort – it’s a very comfortable motorcycle to go the distance on, with good ergonomics, enough room to mount your luggage, a 15-litre tank and as stock, ride quality that’s pretty good over the rough stuff.

Should you buy it?

It’s not as manic a machine as a proper motard nor is it a multifaceted, touring-oriented machine like one of the members of the burgeoning adventure bike segment. It’s a bit middle-of-the-road, this motorcycle, but that’s only in terms of the way it sits in the motorcycling world. This should be the perfect motorcycle when you want to head down some fantastic riding roads to the blue coastal waters for copious amounts of beer, seafood and sunshine over the weekend. A proper hooligan motard will be too highly strung and uncomfortable over the distance, while a big-bore adventure bike will be heavy, cumbersome and frankly, a bit of an overkill. This packs the punch and the agility but also packs in the practicality and comfort. For Rs 13.36 lakh, ex-showroom, Pune for the 1200, you land yourself a fairly exotic, capable, versatile and comfortable Italian maxi motard that nets you pretty much the latest in motorcycle technology and more importantly, a machine that delivers a bomb of a riding experience. The only problem is that WSBK missile, the RSV4 APRC, is just rupees two lakh away. We wish life didn’t expect us to make such hard decisions.