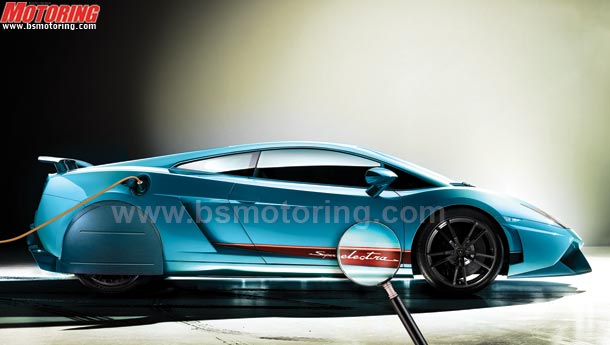 The Bull bites the EV bug! What a shocker!

It has happened! Automobili Lamborghini SpA , the revered manufacturer of some of the greatest supercars in the history of mankind, is finally all set to unveil its first ever electric vehicle. In a secret clinic test just outside Geneva and just days before the official press day at the Motor Show, Lamborghini revealed their newest recipe to select clientele at the famous CERN institute.

To be the first Gallardo based on a platform that is an advanced version of the current one, the EV-S will be close to 30 mm shorter than the existing Gallardo and has no bearing on the 2014 Lamborghini Gallardo that will arrive next year. While it retains an aluminium structure, they've also used a secret new material that they are unwilling to reveal. Despite repeated attempts by us to highlight all the elements on the periodic table, the R&D team refused to acknowledge any particular one, hinting at some sort of composite material of a highly unknown kind.

The EV-S borrows the same electric motor that currently does duty in the Audi A8 hybrid and will be placed in the front, while the batterypack will be placed at the rear, creating a wonderful 51.12: 48.86 weight distribution. Producing roughly 470 hp and 88.4 kgm of torque, the EV-S will definitely be one of the most powerful electric cars of all time. It's mated to a new e-gear transmission that releases small dozes of electric pulsations everytime you upshift and larger ones when you downshift, thus ensuring that the drivers focus more on efficiency than performance.


It has also been revealed that a 2.0 TFSI (again, same as on the A4) will act as the secondary motor (limp-home only), but is an option since it completely takes up the passenger seat space, making it a pure single-seater. With this combination, the power rises to 610 bhp and 108 kgm of peak torque. Without this option, the motor runs the rear wheels only, but with this option, one gets Lambo's four-wheel drive system as well, making it the first bi-motor Lambo in the history of the firm. Wasting none of this power at hand, the EV-S also comes with a solar panel for the engine cover that charges a second, smaller battery pack behind the driver's seat and powers the media player, power windows and even the pod lights and cigarette lighter.

Our source adds “This systematic downsizing demonstrates significant fuel-consumption advantages. The average fuel consumption is the equivalent of 65.6 mpg, and CO2 emissions of 144 g/km. While performance remains our primary goal, we cannot afford to ignore emissions and the direct impact of our products on the visibly unhappy environment. Lamborghini's production techniques have always endorsed eco-friendly processes, and it is time our products showcase the same. With the Gallardo EV-S, we can announce to the world the future direction of Automobili Lamborghini SpA, while still keeping the driving experience truly electrifying”

While he didn't reveal a timeline, our source did admit that hybrid technology will eventually be transferred onto the Aventador too, though being the flagship, a more powerful petrol motor is being considered as a back-up. Coming back to the EV-S, Lambo claims a respectable 0-100 kph time of 3.9 secs (not bad for an EV, no?) with a
top speed of 282 kph, making it one of the fastest electric powered cars in the world. Driven in combination, the acceleration is even quicker – 3.3 seconds to 100 kph and a top speed of 311 kph. In fact, on a dyno test, the power produced was so great that it could theoretically light up 1,088 60 watt bulbs continuously or 692 ceiling fans or 456 single bread toasters at constant rpm.

At the end of the day, we think it is a step in the right direction by Lambo. It is high time supercar manufacturers stopped looking at solely academic top speeds and instead got together to hold hands and accelerate the world's initiatives to save the planet. Protecting the Earth is our duty, and this is no laughing matter of course.