Despite being a late entrant, Apollo has cornered around 25 per cent of the market in the truck and bus category.

Apollo Tyres has rolled out a new vision for itself as it aims to wrest market share from its peers Bridgestone and MRF to become the largest tyre manufacturer in the domestic market and a premium player in international markets by 2020.

The cornerstone of its strategy is to have its finger in every pie of the market. “This is akin to the strategy followed by successful companies like Maruti Suzuki and Asian Paints,” says Satish Sharma, president (Asia Pacific, Middle East & Africa), Apollo Tyres.


Armed with a full range of radials for the bus, truck, car and two-wheeler segments, Apollo hopes to reach new customers through its existing distribution network which is spread evenly across the country. At the same time, it is looking at partnering with original equipment makers to strengthen its footprint across Europe.


The contention for the top slot in the tyre business in India is a three-way fight between Bridgestone, MRF and Apollo, and each one of them is eager to break free from the clutter to emerge as the clear number one in the industry. 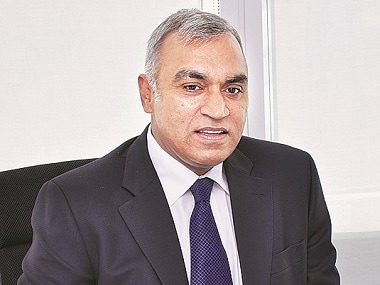 Over the past year, Apollo has unveiled a series of new products in the truck and bus radial category and marked its entry in the two-wheeler space where MRF has a strong presence. Despite being a late entrant, it has managed to gain ground in the two segments, cornering 25 per cent of the market in the truck and bus category.

In the two-wheeler segment, Apollo sells 150,000 tyres in a month. Although still way behind MRF, the demand has been strong enough for Apollo to plan a manufacturing unit in Andhra Pradesh instead of outsourcing production. Apollo will invest Rs 500 crore on the plant, which in addition to two-wheelers will also make tyres for SUVs going forward.


What has helped the company come from behind is its ability to leverage technology wherever required.  At around 2.7 per cent of its revenue in 2016, its R&D spend is higher than MRF’s 0.3 per cent of the revenue, according to a Kotak report in November 2016. Last year, Apollo’s two new R&D centres came up in Holland and Chennai. It also put together an R&D team focused on the US market and hired Steven Smidlein from Goodyear Tire & Rubber Co as senior vice-president for North America to look after both Apollo and Vredestein, the Dutch tyre-maker Apollo acquired in 2009.


Apollo has gained market share even though its products are priced at a premium of 4-5 per cent than the competition. Apollo’s share in the passenger car replacement market, according to the Kotak report, has risen from 12 per cent in 2012 to 17 per cent today, despite the entry of multiple new players.


In truck and bus tyres, with a market share of 27 per cent in the replacement segment and 35 per cent in the OEM segment, it has established itself as the market leader. 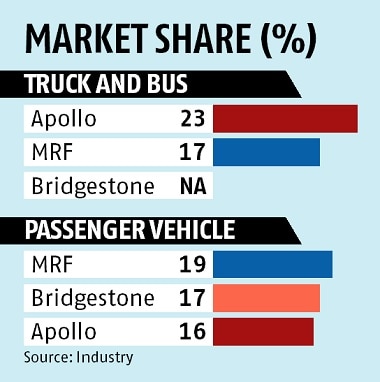 Analysts say its focus on technology justifies the premium price tag. The management aims to replicate the success in the two-wheeler and off-highway tyre segments in India and abroad and position itself at the premium end of the market.


The optimism is reflected in the company’s capacity expansion plans.  It is in the process of doubling its truck and bus radial capacity in Chennai from 6,000 to 12,000 units a day at an investment of  Rs 2,700 crore; Rs 200 crore will be invested to create a new production line at its plant in Vadodara; a new facility will come up in Andhra Pradesh; and work on a €475-million plant is under way in Hungary. The Hungary facility, once completed, would have a capacity of 5.5 million passenger vehicle tyres and 675,000 heavy commercial vehicle tyres.


“We have pretty much exhausted significant expansion possibilities in our current plants and hence these investments, keeping in mind the growth potential of the market and our need to keep pace with that,” says Gaurav Kumar, CFO, Apollo Tyres.


However, there are certain market-specific challenges that Apollo will have to contend with as it moves along the expansion path.


While its revenues from the ASEAN region, West Asia and Africa are steadily growing, business in Europe remains tepid.  In FY16, Apollo’s European operations suffered due to high inventory level and working capital requirement arising from unfavourable winter and currency movement.


Apollo says it plans to start the original equipment business in Europe next financial year, supplying tyres initially from its plant in the Netherlands and then eventually from the new plant in Hungary.


In the domestic market, cheap imports from China are chewing away at its market share in the commercial vehicle and the replacement market. Analysts expect Apollo’s revenue to grow at 10 per cent annually in FY16-18E. However, profitability is likely to be affected due to rising input prices and higher interest outgo.