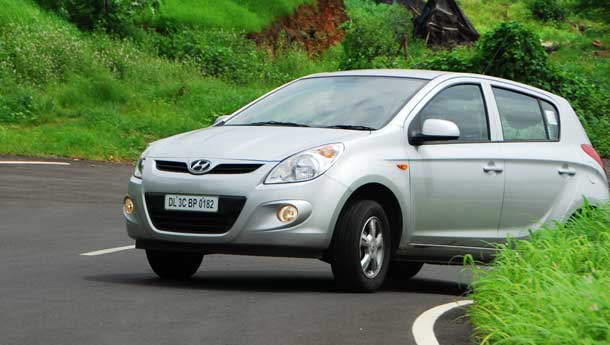 ... crumbles. At least for Mini. They lost the battle, but won the war. Hats off to their marketing geniuses, they've managed to once again arouse curiosity in their brand, and scored a hell of a lot of brownie points by drawing in more customers into the showrooms. So what if they lost to the Porsche 911 by two seconds at Road Atlanta...

Speaking of minis, hatches and what have you, a certain hatch has caught my attention these days. It is the Hyundai i20. Frankly, it's a hatch that we media fiends have tended to ignore, lost in the melee of other new hatches. But it's going great guns, that too with very little by way of marketing spends. Between the three engine variants, Hyundai manages to push out 5500 units on an average, and that is just the start.

Take this into consideration that when Hyundai had the Getz around, it couldn't sell more than 2000 units a month, once again with all three engine options combined. And what's more, the i20 costs significantly more on an average than the Getz did back then (and still does). So how is Hyundai getting it right?

It's got to do with packaging. Look at the average 1.2 Asta for instance and you get a lot of car for your money. Electrically folding mirrors, a music system with a USB and aux-in, nicely finished interiors, a very busy looking centre console and pretty decent interior space. It rides reasonably well, doesn't go around corners as well and delivers decent fuel efficiency too. As a reader who once wrote in said, "What do you guys mean by when you say it goes around corners well, and why do you guys focus on it?" He actually had a pertinent point - we do sometimes focus far more on the dynamics than what the end user actually cares about, which means a not-so-good handling car can still do very well on the sales charts. And that pretty much holds true for the i20.

Look around the high-po areas of Mumbai, New Delhi and other metros these days and you realise that the i20s are slowly becoming the preferred wheels of choice for a set who would have probably wanted to be in a Suzuki Swift two years ago. What the i20 has specifically done, and is a good lesson for other automakers to learn from, is that you can sell a premium hatch in this country for premium money as long as you can justify the price tag. As for us journos, I think once in a while we just shut up and learn!