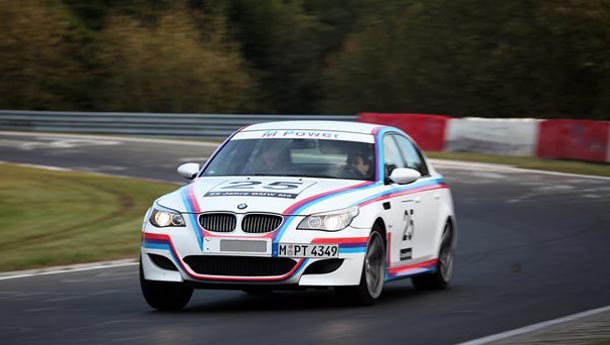 BMW's M division has gone nutty in the head. Alright, maybe that's a bit extreme, but what else do you call them when they take the otherwise quick BMW M5, and make it even quicker!

Apparently, the good men at BMW's famous Motorsport division at Garching took one number M5. Increased the stroke of the 5.0-litre V10 to 5.5-litres. Then dumped the sequential manual gearbox for a BMW dual clutch transmission - courtesy the M3 and put in a carbon fibre manifold and a secondary oil cooler. Since BMW has called this the "CSL", it also gets a carbon fibre roof, reducing its weight by 50 kg. Further weight was reduced by putting in lighter front carbon fibre seats and altogether doing away with the rear seat and stripping down the interiors.

So what do they call it then? Well, the BMW M5 CSL, that now produces a staggering 580 bhp and an equally impressive 55.3 kgm of torque. According to Albert Biermann, the head of the M division, the car can now accelerate from 0-100 kph in just 4.1 seconds. At the hands of one of the Ring taxi drivers, the car has broken the eight minute timing around Nordschleife and might even be quicker than the Cadillac CTS-V which recorded a 7 minute 56 second timing around the fabled track.

BMW plans to keep this car as a one-off and doesn't intend to build anymore, since it is a car built to commemorate 25 years of the M5. Something just like the E39 M5 stationwagon then, built for the M division's then chief.