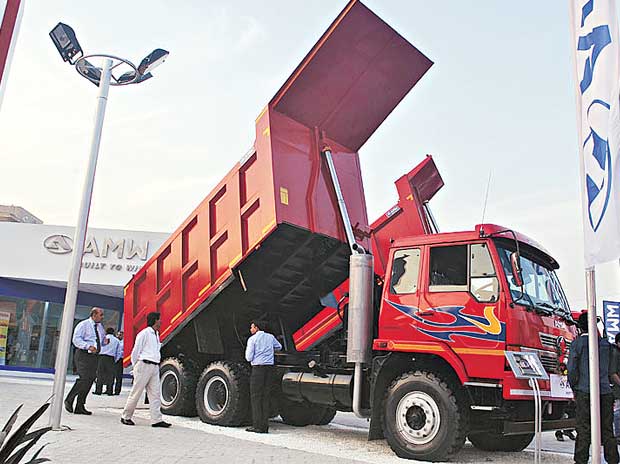 A consortium of banks, led by IDBI Bank, has been kept busy by a little known maker of trucks for the past several months. Mumbai-based AMW Motors, the maker of heavy duty tipper trucks used in mining, owes Rs 1,800 crore to these banks.

Reluctant to let another non-performing asset hurt their already stressed balance sheets, the banks were ready to talk to anybody who was willing take over management control of AMW and repay the debt, at least to some extent if not all.

Sources at AMW say that banks have held talks with Russia's commercial vehicle manufacturer Kamaz for diluting 51 per cent stake in the company, which itself is a rare case considering that the shares were taken over under the strategic debt restructuring route.

Will Kamaz, or any other investor, invest in the beleaguered company? While the question hangs fire, AMW needs investments urgently. The company has run out of working capital, production at its Gujarat-based manufacturing plant has nearly come to a standstill, dealers have exited the company to cut their losses and its brand equity has taken a hit.

A Maharashtra-based AMW dealer says, on the condition of anonymity: "Sales are negligible and we are surviving only through servicing the 40,000 AMW trucks running on the roads. Trucks we are supplying today are literally made-to-order as the company undertakes production only upon receiving confirmed orders." AMW did not respond to an email sent in the second week of this month.

But how did a company that gave giants like Tata Motors a tough fight in the tipper truck segment (the ones whose cargo platform can be raised to empty the load) and aimed to dislodge the Indo-Swedish combine of Volvo Eicher to claim the third spot come to the brink?

Robust beginnings
AMW, which stands for Asia Motor Works, was set up in 2002 by Anirudh Bhuwalka, a Babson College, Massachusetts MBA, with the aim to disrupt India's commercial vehicle market that had till then been a two-horse race (Tata Motors and Ashok Leyland) for decades.

Bhuwalka, the nephew of Shashi Ruia, adopted a business strategy never seen in India before. Instead of a manufacturing company, AMW became an assembler of critical parts: it purchased components from various suppliers before bringing them together for final assembly.

Thus, engines were bought from Cummins, gearboxes from ZF, clutch from Valeo, axels from Eaton and swanky driver cabins were imported from China. Each of these suppliers was a leader in its segment globally. Chassis, however, were built by AMW at its Bhuj plant which in near the Kutch desert.

At a time when the Indian truck makers have developed their own engines, transmission and gearboxes AMW's model of operation was unique.

Though the concept of shop-assemble-and rollout may be new to Indians it is certainly not new to the Americans. Paccar, a $20 billion company and one of the biggest truck makers in North America, too does not make its own engines or other critical parts but sources them from established suppliers.

This strategy allowed AMW to have localisation levels of around 90 per cent for trucks ranging between 25 tonnes and 49 tonnes.

The customers, however, did not care who was supplying the transmissions or other similar parts. They lapped up AMW products even though they were priced comparatively higher than equivalent Tata Motors or Ashok Leyland trucks.

Four or five years back, most trucks provided bare-bone structures and buyers had to buy fitments, which drove up their costs. AMW, on the other hand, provided cabins that had air-conditioning and a music system to begin with. These became a hit in hot and dusty work environments where drivers preferred the comforts of a cooled and sealed cabin.

Diversification plans were also being laid out to enter the bus market and the light commercial vehicle (LCV) segment where Tata Motors' Ace was the undisputed king as well as tap the demand from the armed forces.

Market slowdown
In 2012, the Supreme Court imposed a ban on mining activities in Odisha, Karnataka and Goa, leading to a free fall in truck volumes. To make matters worse, the construction and road sectors went into a slowdown.

These companies with deep pockets were able to weather the slowdown better than AMW and more importantly bounce back during the ongoing uptick. According to SIAM data, medium- and heavy commercial vehicle volumes jumped 30 per cent to close at 302,000 units last financial year, compared to 232,000 units in 2014-15.

According to him, investments made pre-2013 on the back of good growth forecast did not pay off. "In addition to this, there is significant competition both from the domestic and as well as foreign manufacturers. Companies that were leveraged were not able to absorb the borrowing cost fully."

However, sources expect the induction of the strategic partner to be completed in a month or so, which will help AMW participate in the demand spike that is expected after the monsoon rains.