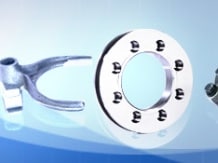 Debt-ridden automobile component maker Amtek is close to selling its profitable German unit, Tekfor, for about $700 million (Rs 4,690 crore) to an foreign buyer in a bid to reduce its debt.

The group also plans to sell 50 per cent share in a joint venture unit and a domestic food business, as well as raise funds from three overseas investors.

It claims that after these deals are done, the debt of the company will come down by $1 billion (Rs 6,700) in the next 12 months.

"We are working with two parties and are close to final negotiations with one. It is not an Indian company. The entire stake in Tekfor, along with some smaller forging assets, will be sold," Arvind Dham, the founder and chairman of Amtek Auto, told Business Standard.

For the Tekfor deal, which is expected to be the main contributor to debt reduction, financial services corporation Morgan Stanley is an advisor.

Dham also said a joint venture unit in India, in which his company had a 50 per cent stake, could be sold. The JV is with a foreign firm.

"The land and building are owned by us. We will announce it (the sale) in a quarter," he said.

Grant Thornton and EY are advisors for the sale of non-core assets in domestic businesses, under which a food business will be also sold.

Carnation Hospitality, owned by a group company Rollatainers, operates coffee chains under the Barista brand in the country. It also operates restaurants such as Kylin, some burger outlets under Wendy's (an American brand), and a food supplier business.

Tekfor, which was acquired by Amtek in 2013, generates annual revenue of about $650 million and is a profit-making business.

It has nine manufacturing units and about 3,000 employees across Germany, the US, Brazil and Mexico. Tekfor produces components for transmissions, engines, drivelines, special applications and safety fasteners.

Its customers are Volkswagen , Fiat, BMW, Daimler and Ford. Once the debt reduction exercise is complete, Amtek plans to bring three overseas investors who will infuse funds into the company. KKR is an existing investor in the company and had infused Rs 1,800 crore in 2014.

"Three investors are conducting due diligence, which has progressed to various stages. Since market cap is low, vanilla equity is not feasible. That is why we will offer them structured instruments. These overseas investors that are big global names," said Dham.

In the quarter ended March 31, 2016, Amtek Auto posted its biggest ever quarterly loss of Rs 529 crore.

The company has faced a low demand and capacity utilisation in the last couple of years owing to a slowdown in demand from domestic automobile segments such as light commercial vehicles, tractors and select car makers.

The sluggishness in the construction market has also contributed to the decline in business. This has affected its ability to generate adequate cash flows to service all the debt it has raised for domestic expansion and overseas acquisitions.
SELL OUT
Amtek is in the final stage of selling its German unit, Tekfor:

No. of overseas investors: 3