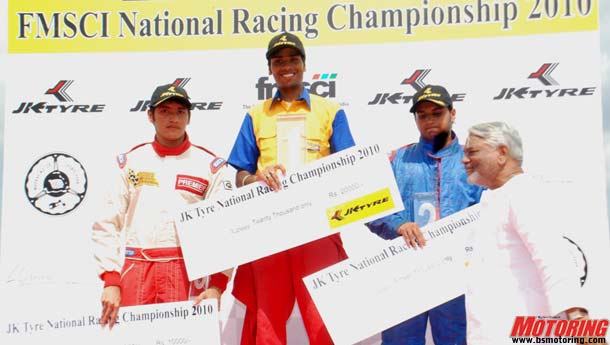 Ameya Walvalkar and Akhil Devarag of defending champions Team TVS Girling Racing did their team proud by winning both races in the Formula LGB Swift class. While Ameya triumphed in Race 1, Akhil took the chequered flag in Race 2.  Fresh from his double win in the Polo Cup races held in Pune last month Salish Bolisetti of  Rad Racing maintained his winning streak by recording significant wins in both races of the Super Saloon class in Round 1 of the 13th  J K National Racing Championship which was held at the Madras Motor Race Track near Chennai.

Akhil Devarag hogged the limelight winning the second race of Formula Swift though he could not finish the first race due to some “mechanical problems” in his car during the fifth lap.  This race was won by Walavalkar with a creditable lead of nine seconds from second placed Gokul Krishna of the Mars Racing Team.

In the first race, Walavalkar pushed his car to the front after a lot of manoeuvring from his team mate and pole leader, S.Narendran and then held on to the slender lead that he enjoyed from Gokul Krishna, who is a no mean driver having won the JK Tyre Junior Cup last year.  Walawalkar was in front from the third lap and recorded a total time of 20minutes 04 seconds.  Gokul Krishna clocked 20: 13 secs while Narendran who finished third was then relegated based on a protest by Parekh that he was “pushed intentionally in the sixth lap at Turn three by Narender. The protest  was upheld by the Stewards.  Accordingly, Ajay Kini was adjudged as third having timed 20:14.450 secs.

After a delayed start in the second race, Devarag was in his elements starting at third on the grid being the third fastest in qualifying. He was like a hawk looking for space to improve upon his position and could manage to over take Gautham Parekh. Then on, he showed his skills in forging ahead of Ajay Kini in the third lap on Turn three.  Then on, Devarag maintained his leadership position with abundant confidence, while there was tough fight going on between Kini and Parekh and Walavalkar.

In the Saloon cars event, Bolesetti, winner of the Volkswagen Polo Cup in Pune last month, made his intentions clear.  Starting from the pole in both the races, Bolesetti had good starts and knowing the track conditions well, especially the 11 corners did not envisage any problem and was able to push himself with total comfort to remain the leader and the winner.  The manner in which he drove his Maurti Esteem, it gave enough evidences on his determination to clinch the title winning the remaining five legs.