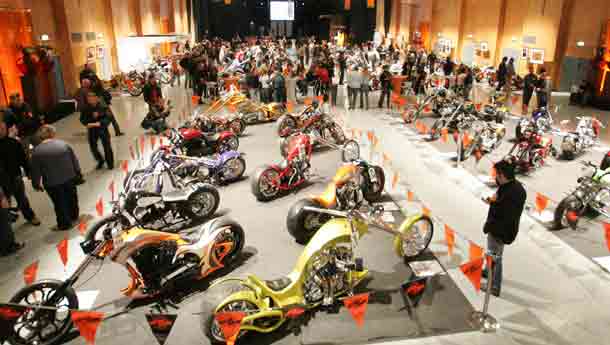 These are just three of the winning motorcycles from the recent European Championship of Custom Bike Building hosted by Custom Chrome Europe in Mainz, Germany. The three motorcycles on these pages are the winners of the three categories – Freestyle, Modified Harley-Davidson and Custom Chrome kit bike class. Not only were most of the motorcycles stunning (a full display would take up most of the mag), they mostly make the ill-tempered Teutuls look like amateur-conservative bike builders. Here's to originality and creativity!

The Time Machine from Sapka Muvek (Hungary) won the Freestyle class, which is the premium class in the competition. The motorcycle is supposed to be a tribute to HG Wells' classic and with its single sided front and rear suspension, the motorcycle, as many put it, would be what Jules Verne would have thought up. The Time Machine, appropriate name that, uses a 1941 Harley Knucklehead engine with a 3-speed automatic gearbox. The rigid frame boasts specially made wheels and drum brakes and the whole theme is antiquity, which is evident in the wood finish parts and the old-timer dials and gauges that abound.