The stock of Amara Raja, the storage battery maker, among other items, is down 2.5 per cent after a below-expectation performance in the June quarter (Q1) across most parameters. Barring the strong revenue growth, up 13 per cent year-on-year to Rs 1,497 crore, the results disappointed, especially on the margin front.

Operating profit margin at 12.9 per cent, down 430 basis points (bps) over the year-before quarter, was the lowest in the past nine quarters.

The company said these were due to high pricing pressure in the industrial segment and lower operating profit margin in the home uninterrupted power system (UPS) segment (seven to eight per cent). On top of a weaker pricing environment and adverse product mix was the 400 bps year-on-year rise in raw material costs as a percentage of sales, to 70 per cent.

While peer Exide also saw raw material pressure and employee cost increase, its margin fall was restricted to 20 bps, to 15.4 per cent, ahead of analyst estimates of under 15 per cent. Lower other expenses helped. Exide is undertaking cost control and technology upgrade.

For Amara Raja, a poor margin show, higher tax rate and depreciation expense led to a 24 per cent year-on-year fall in net profit to Rs 100 crore.

Exide also had higher tax rates and lower other income in the quarter. Its net profit at Rs 89 crore was down to four per cent more, year-on-year. Given the weakness in the industrial segment and lower margins, analysts at Kotak Institutional Equities have cut Amara Raja’s FY18 earnings estimate by 12 per cent. Exide also saw earnings downgrade, on the back of higher lead costs and increase in tax rates.

On most parameters, Exide was ahead of Amara Raja in the quarter. However, the latter had better revenue growth. Exide’s was 4.6 per cent higher over a year; Amara Raja’s at 13.4 per cent beat estimates,  driven by higher home UPS and replacement segment sales.

Both companies had taken price hikes over the earlier two quarters by 10-15 per cent, to offset the increase in higher raw material costs in the replacement segment. They might have to do so again, as lead costs in July were up 18 per cent annually and five per cent over the June quarter.

On the demand side, growth would be led by improved demand from the automotive segment, as well as market share from the unorganised sector with implementation of the goods and services tax.

Tighter tax compliance will lead to a gradual opening of the replacement battery market for the commercial vehicles and tractor segment, where the unorganised sector has more than half.

While existing product lines will continue to face competitive and pricing pressure, both companies would look at newer business segments such as e-rickshaws.

Analysts at Emkay Global believe Exide’s renewed strategy, technology upgrade and better after-sales service will lead to lowering of the valuation gap between with Amara Raja. Exide trades at about 22 times the FY18 earnings estimate; Amara Raja’s valuations are pegged at 28 times. 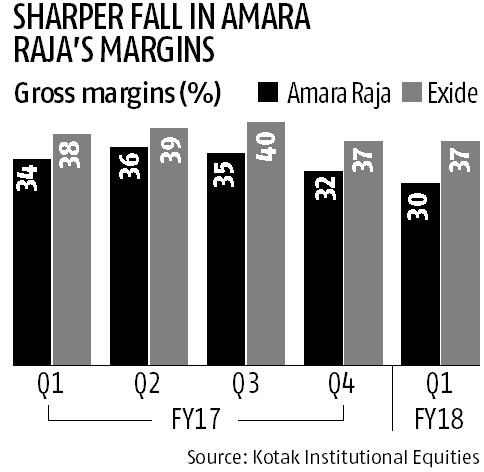