This second-gen Q7 is 325 kg lighter and also features a segment first plug-in diesel hybrid that requires just 1.7-liter of diesel per 100 km and breathes less than 50 gm of C02 per km! 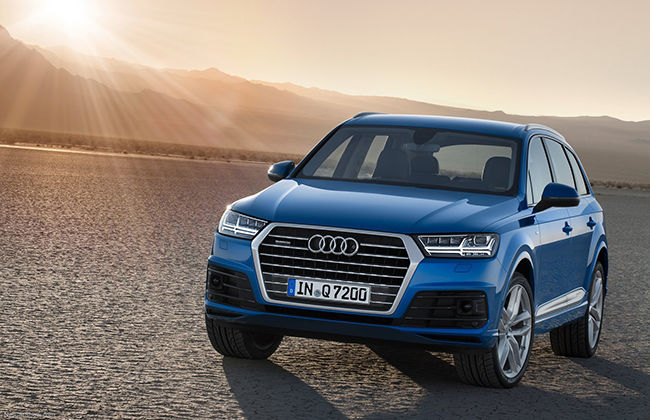 Audi has revealed second-generation of its flagship SUV - 2015 Audi Q7. The new Q7 comes with a massive-list of improvements inside-out and rides on a new second-iteration of the modular longitudinal platform, and is more greener than ever. Q7 will go on sale in early next year in Europe, expect the Indian debut soon after it. It will be assembled in Audi India’s plant like the current one. 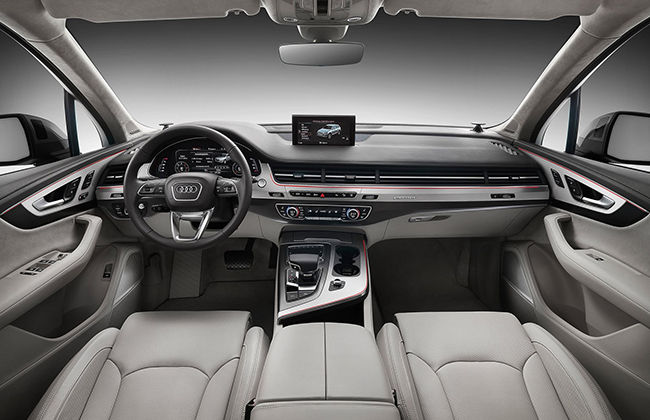 Prof. Dr. Ulrich Hackenberg, Audi Board Member for Technical Development: “The new Audi Q7 is a statement of our competence. It is around 26 percent more efficient and is equipped with the latest assistance systems, infotainment modules and connect features.” 2015 Second-gen Audi Q7 Highlights The SUV is designed from ground-up but hints of the on-going model and debuts the second generation of the modular longitudinal platform.  The multi-material body features majorly high-strength steel and aluminum, courtesy to it, new Q7 is 325 kilos lighter with a kerb weight of 1995 kg for the 3.0 TDI while 3.0 TFSI petrol is even lighter at 1970 kg.  The single-frame grille is new like the recently revealed Q3 facelift. While the broader headlights features XenonLEDMatrix LED lighting options with Audi’s new signature double arrow daytime running LEDs. The tail lights are LED featuring Audi’s optional dynamic turn signals. Dimensionally, the new Q7 got lil’ slimmer but Audi promises more room inside - LxBxH - 5.05m x 1.97m x 1.74m and wheelbase - 2.99m. Boot space is of 295-liters with all 7-seats up.  The dashboard of the 2015 Q7 looks contemporary, the decade old dashboard design is gone for good.  The instrumentation cluster sports Audi virtual cockpit similar to that of third-gen TT. The 12.3 inch fully digital instrumentation cluster is backed-up by second-gen modular infotainment platform powered by a quad-core T30 processor from NVIDIA, offering a resolution of 1,440x 540 for crisp graphics!    The infotainment system offers a pop-out 7-inch (8.3-inch optional) display along with the latest generation of Audi’s MMI, featuring a large touch pad. Moreover, Audi says Google Android Auto and Apple CarPlay support will also be available. Decibels are powered by either Bose sound system with 3D sound or an opulent Bang & Olufsen Advanced Audio System with 3D sound featuring 23 speakers packing amplified 1,920 watts subwoofer. Speaking of the engine, In India, the new Q7 will be powered by an updated version of the 3.0 TDI V6 diesel. The motor pumps out 272 hp and a peak torque of 600 Nm, clocks 0-100kmph in 6.3 seconds and extracts 149 gm/km of C02.  Globally, along with this, a lower spec 3.0 TDI and 3.0/2.0 TFSI (petrol) will also be available.  The Greener Q7 -  Q7 PHEV (Plug-in Hybrid Electric Vehicle) features a 3.0-liter TDI diesel that churns out 258 hp which is coupled to an electric motor integrated into the eight-speed tiptronic gearbox. The coupled output is 373 hp and blistering 700 Nm of torque. The SUV clocks 0-100kmph in 6 seconds and takes just 1.7 liters of fuel per 100 kilometers. Besides, it comes with an all-electric range of  56 kilometers. 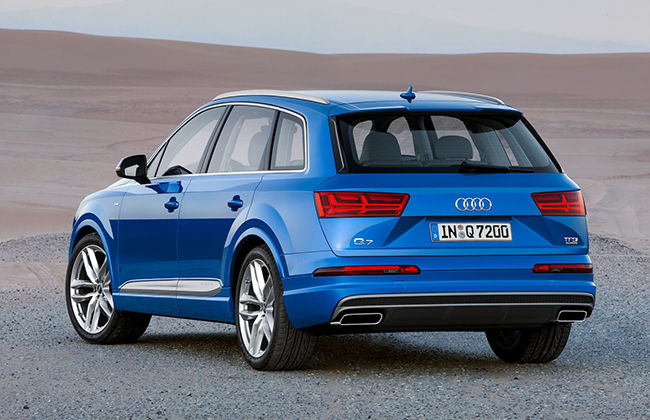