All you need to Know about Porsche 918 Spyder 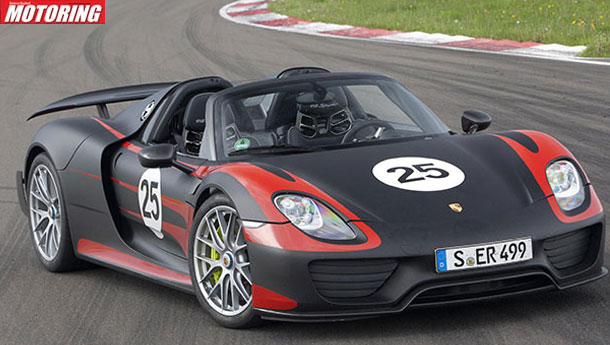 Porsche, the Stuttgart based performance car manufacturer is working on its upcoming fascinating hypercar, called as 918 Spyder. The mean-machine is in its final stages of development and will be officially revealed by the company in near future. The Porsche 918 Spyder is a two seater supercar which comes equipped with the 4.6-litre, eight cylinder engine that produces 608hp of power. The engine is derived directly from the power unit of the successful RS Spyder, which explains why it can deliver engine speeds of up to 9,150 rpm. The engine is coupled to an lithium-ion battery with a 6.8 kWh capacity motor. The hybrid module on rear axle gives 154hp of power and the electric motor positioned at the front gives 127hp, making a combined power output of 887hp.

Striking features of the V8 are that it no longer supports any auxiliary systems, there are no external belt drives and the engine is therefore particularly compact. Weight and performance optimizations achieve a power output per liter of approx. 133 hp/l – the highest power output per liter of a Porsche naturally aspirated engine – which is significantly higher than that of the Carrera GT (106 hp/l) and outstanding for a naturally aspirated engine. The 4.6-litre engine is coupled to a 7-speed automatic PDK transmission. The car remains stable at a top speed of 340km/h and sprints 0-200km/h in just 7.9 seconds. More interestingly, the car reaches 100km/h from stand still in mere 2.8 seconds, while in electric mode, the hypercar sprints to 100km/h in just 7 seconds.

The complete electric mode of the Porsche 918 Spyder can run up to 29 kms. Th lithium-ion battery is plug-in charger compatible, one can charge the vehicle completely by using a normal household socket in less than 7-hours. Despite high power and torque value, the hypercar offers a fuel efficiency of up to 33km/l. The 918 Spyder utilizes the best state-of-the-art technologies, taken straight from motor racing, to achieve its top performance. The entire load-bearing structure is made of carbon fiber reinforced polymer (CFRP) for extreme torsional rigidity. Additional crash elements at the front and rear absorb and reduce the energy of a collision.

The car’s unladen weight of approximately 1640 kgs, an excellent low weight for a hybrid vehicle of this performance class, is largely attributable to this concept. This results in a slightly rear end biased axle load distribution of 57 percent on the rear axle and 43 percent on the front axle, combined with an extremely low center of gravity at approximately the height of the wheel hubs, which is ideal for driving dynamics.