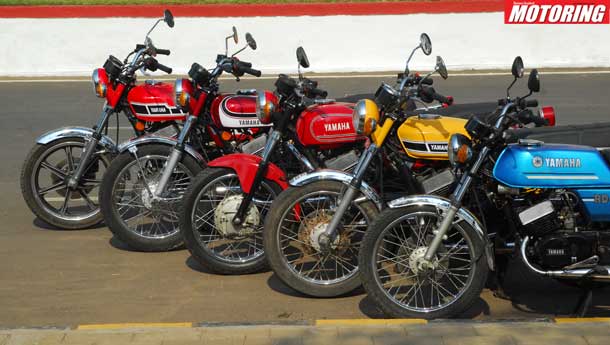 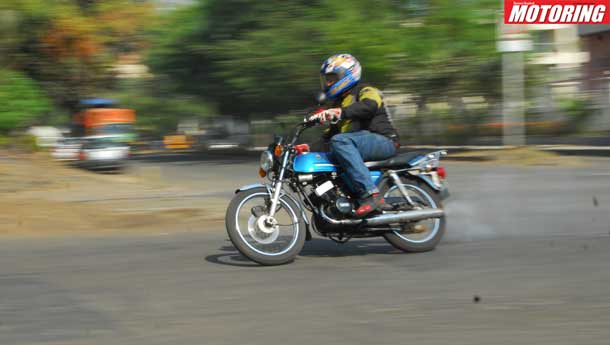 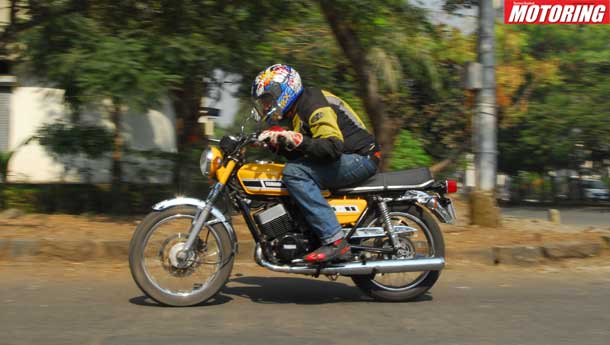 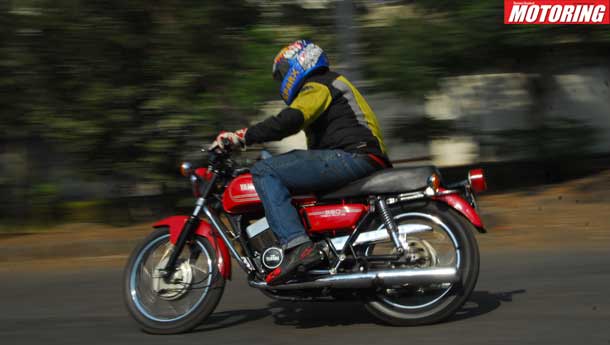 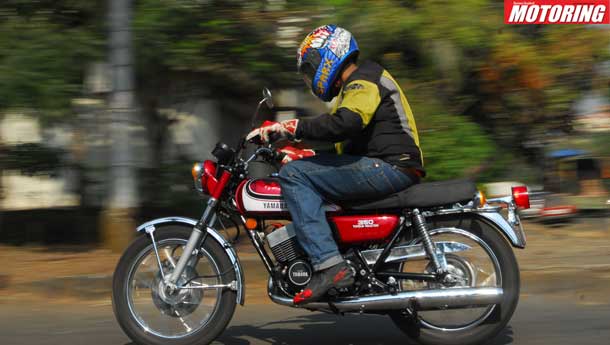 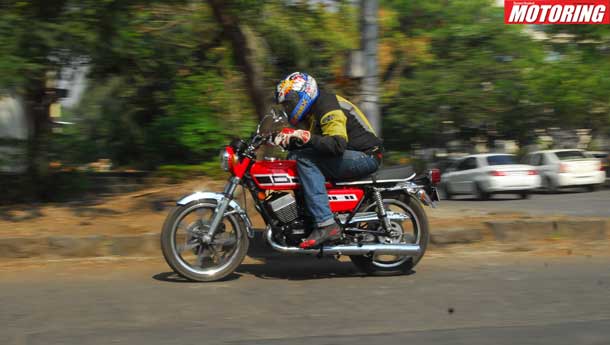 The typical deep throated yowl that only a two stroke can summon, grows louder. And then, from within a cloud of blue, sweet smelling smoke, emerge five motorcycles. Five of the finest two-strokes ever made by Yamaha, and all of them bearing the legendary RD prefix to their names. The RD lineage began in 1972 and gradually, these bikes built their reputation based on race wins, and wetting the pants of many young riders at the time, as they showed larger machines their tail-lights. These strokers weren’t nicknamed ‘Giant Killers’ for nothing.

As they stand there in the morning sun, ticking away as their total of 10 chromed silencers cool down in the gentle breeze, their motors – all parallel twins and cooled by the air – wait to wake up the dead.

The intention of this gathering was to get together all models of the air-cooled twin cylinder RDs ever made. Sadly, the 200 misbehaved on the way here and had to be punished by letting it stand in a corner. Despite that, I can’t help but gloat – this could very possibly be the first time they’re being featured together in any magazine in the country!

Right from the smallest member of this powerful family, the RD 125, to the biggest, the RD 400, they were all present, save for the 200, and up for a little playtime! The games that RDs love to play, I might add, are rather rough ones – ones involving pinning the throttle wide open and running the world’s oil reserves dry! Thoroughly entertaining games, these.

Wringing the throttle open as far back as it can go, here I am sprawled across the square-ish tank, racing past the traffic as if it were standing still.

With almost all the power from that tiny twin being put down on to the asphalt at mid and high revs, you need to whack the RD 125 hard to make it put a smile on your face. But once it’s in its powerband, you’re easily flying past larger displacement four-stroked machinery without even trying too hard. Picture a perfectly tuned RX 100 going hell for leather. And then add in about 50 per cent more grunt. Now that’s how the RD 125 goes about munching through its miles on the odometer.

Weighing just a whisker more than the RX 100, throwing it around corners is a cinch. Sure, the suspension has seen better days and the swingarm bushes seemed tired, but the enthusiasm this motorcycle has for corners is astounding. It will thrash itself through a kink, but not once does it scare you silly. For that, it’s time to swing my legs over its larger siblings.

Now if looks really could kill, this RD would be serving a life sentence behind bars. That gorgeous yellow with the black and white speedblocks, a paint scheme made famous by the legendary Kenny Roberts, knocks you out cold.

This is a good looking motorcycle, and that 30 bhp motor goes as well as it looks! With a brisk start, things get frantic at higher revs. The engine gets spinning and the world whooshes by in a blur!

A tad heavier than the 125, the 250 seems fuller in the cheeks when you’re hustling it through a corner. The lone disc brake at the front feels wooden, but that could be due to the pads that might have hardened with age. But summon the front stopper, drop a gear or two and then gradually pull back on the throttle and the bike will shoot you out through the bend with a helmet full of joy!

With the 250, the power is present nearly everywhere, though it’s happiest when it’s screaming closer to the redline. That makes it a tad easier to ride in traffic, where most of the progress happens at lower revs while gaps allow you to explore the higher rpms.

When this one was launched in 1983 in India as a result of the Escorts (makers of the Rajdoot) and Yamaha collaboration, it took every red-blooded Indian motorcyclist by surprise. Accustomed to riding grumbling Jawas (they were brilliant in their own right) and thumping Enfield Bullets (which were and still are all about low-down torque), the Indian motorcycle enthusiast suddenly had access to a new bike that could nearly break the sound barrier (albeit producing lesser power than its siblings sold abroad) on normal pump gas!

Many people (yours truly included – don’t ask!) did break bones and tore ligaments, what with the huge but highly inadequate drum brake at the fore. The combination of ribbed front tyres and 30.5 bhp didn’t help things either. It definitely didn’t earn the ‘Yamdoot’ nickname for nothing! But in the hands of the racer boys, it became a force to reckon with on race tracks across the country.

As per the RD user manual, it was good for a top whack of 150 kph. So now you know that anything more is a fairy tale. The thrill of the RD 350, however, isn’t in its top speed, but in how rapidly it gets there.

Sales began to taper when people began to look elsewhere for a more frugal ride. The dearth of competent RD mechanics dented the image of the RD further. In a bid to boost sales figures, an even more detuned 27 bhp RD was introduced in 1985. Unfortunately, this one wasn’t a success story either. The last one rolled out of the factory in 1990. The reign of the mighty RD had come to an end, but while it lasted, it was second to none.

If you want to know what an actual RD 350 feels like, this is the one to swing your legs over. Putting out a good 9 horses more than the RD that made its way to India, and a disc brake at the fore, this one begs to be whipped hard. Bring any Indian-made so-called High Torque and this one will promptly kick the Rajdoot out the door.

Riding the two bikes back to back, the extra horses of this one make themselves felt right from the word go. Something about the motor makes you realise why this one was the model that made motorcycles bearing the RD prefix a legend.

But the increased power and better braking aren’t the only things we were deprived of. The gauges are better produced too, and somehow, despite being older, this RD feels tighter than its Indian assembled sibling.

This is the RD 350 that the rest of the world knows, and it is a wonderful machine. It evolved from the R5 – which sported a 5-speed gearbox – that went out of production in 1972. The next year, the first RD 350s went on sale in the US of A. Reed valves had made their debut on the parallel twin two-strokes and by George, did they open up a totally new performance dimension or what! These reed valves, small plates of wispy steel with a stop plate mounted behind them, allowed Yamaha engineers to tweak the ports and the result was better performance and a broader band of power. Another addition was the 6th gear and so, the legend was born!

This one is the mothership of all air-cooled RDs. The Omega, if I may. Putting out 43 horses and weighing in at a relatively waif-like 175 kg, the 400 had the concept of power-to-weight ratio spot on even back when it was launched in 1976. Beyond this bike, there were only the heady liquid-cooled RDs to satiate any more of your appetite for destruction.

As much as 45 horses might seem, there have been those who have funnelled roughly double of those ponies out of the RD 400. These bikes, all sculpted for hardcore track use, have powerbands so narrow that you will need a vernier calliper to measure them. It’s on or off with these bikes. None of that progressive throttle horse manure for these Yamahas.

But the stock 400 is just the opposite. It has reasonable grunt down below, but it begins to feel happier as you climb up the revscale. There are some occasions when even a 350 rider could do with a little more shove and the 400, it seems, has been made to ensure that those times cease to exist.

Disc brakes on either end help you stop the 400. It’s good they’re there too, for just like its smaller stroker siblings, there’s little or no engine braking to be had. Rely on slowing down substantially by just dropping a gear or two as you would on a four-stroke and you will affix your place on the wall. Just way too literally for your liking. Sadly, the 400 was put to rest in 1979 and it has been sorely missed ever since.

A big thank you to Kanchan Waval, Rohit Yadav, Amit Gaonkar and Rohan Sawant for allowing us to feature their magnificent machines.