Rising raw material costs and demonetisation impacted December quarter performance of Ashok Leyland. The company posted an eight per cent year-on-year growth in revenues to Rs4,723 crore on the back of a nine per cent growth in unit sales of medium and heavy commercial vehicle (M&HCV) sales. Light-commercial-vehicle unit sales were down 2.5 per cent year on year in the quarter. Analysts had already given growth warnings, given the sharp decline in retail sales after demonetisation. Demand continues to be soft as fleet operators are struggling with lower capacity utilisation and fall in freight rates. Consider the movement of M&HCV unit sales for Ashok Leyland. From a 33 per cent year-on-year growth in October, unit sales growth slowed to 10 per cent in November and ended the quarter with a 9.5 per cent fall. The fall in light commercial vehicles has been steeper, with December recording a 20.5 per cent decline.

What aggravated the situation was a rise in raw material costs, which were up 15 per cent over the year-ago quarter. This, coupled with higher employee costs and other expenses, meant that operating (underlying) profit growth was up one per cent to Rs454 crore. Operating profit margins were down 70 basis points year on year to 9.6 per cent. This, coupled with lower other income, meant that net profit came in at Rs186 crore, down 13 per cent over the year-ago quarter. The quarter also included a foreign-exchange loss of Rs63.71 crore.


The company’s managing director and chief executive said that buying ahead of BS-IV norms implementation in FY17-18, along with recent introductions Guru truck and Sunshine bus, as well as light commercial vehicles (Partner, MiTR), is expected to have a positive impact on unit sales in the March quarter.


While the January factory sales numbers will be a near-term trigger, the stock will also react to any news of a scrappage scheme in the Budget for commercial vehicles, as well as investments in infrastructure, which is expected to boost the sale of tippers. However, it needs to be seen whether these are enough to boost volumes at a time when overall demand is weak.


Though expectations were not high, the profit came in below Street estimates. 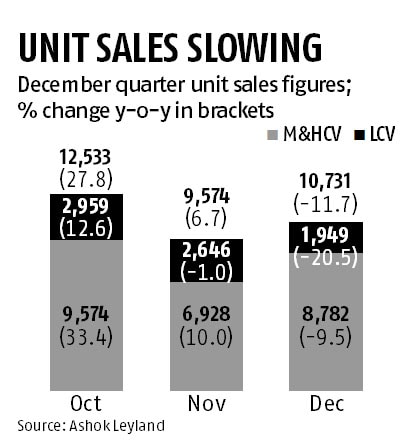