After record loss, Tata Motors to scout for partner in car business

Tata Motors has swung to one of the steepest quarterly losses since the December quarter of 2018-19. To ride out the turmoil caused by Covid-19 disruptions in its Indian as well as UK subsidiary Jaguar Land Rover Automotive, the firm said it would review its business to save Rs 15,000 crore for the consolidated entity in FY20-21. 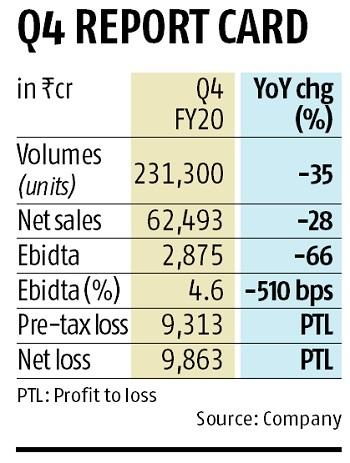 The company is embarking on an aggressive deleveraging exercise.


As part of its plan to conserve cash, the company is cutting capital expenditure (capex) at JLR by 40 per cent to £2.5 billion in FY21. It has also increased the JLR cost reduction plan by £1.5 billion to £5 billion by Q4 of FY21. The India business capex for FY21 is being cut by two thirds to Rs 1,500 crore. The company is also looking at a cash improvement plan of Rs 6,000 crore, which includes cost savings of Rs 1,500 crore for FY21. The net debt of the automotive business at the consolidated level stood at Rs 42,000 crore excluding the lease liabilities. The company’s consolidated operating profit was at Rs 2,875 crore in the quarter.

On JLR, Balaji said China had seen an “encouraging recovery” both month-on-month and quarter-on-quarter. He said Europe and the US were also on the path of recovery even as rest of the world have yet to see any green shoots. A report said the firm expects to cut 1,100 temporary agency employees at JLR in the UK.