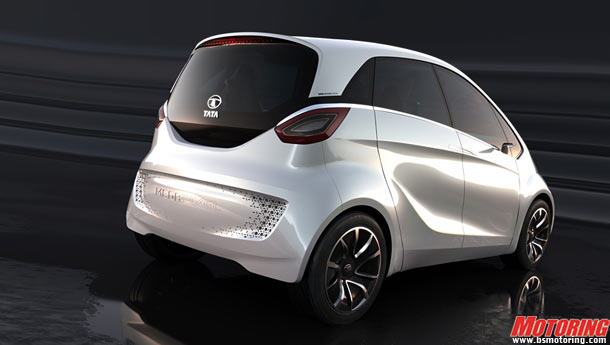 At a time when fuel conservation is becoming imperative across the world, India's Tata Motors is aiming to make a car, Tata Megapixel that can deliver up to 100 kilometre from a litre of fuel by using a unique combination of technology.

The company, which surprised the world with 'Rs 1 lakh car' Nano, unveiled the concept vehicle which is a four-seater global range extended electric vehicle (REEV) meant for city driving.

The new innovation from the house of Tatas is likely to be commercially launched in around three years from now.

"Realistically such products take at least 3 years to develop. There are lots of electric technology to be developed, besides many other things," Tata Group Chairman Ratan Tata said after unveiling the vehicle here at the Geneva Motor Show.

The vehicle combines a lithium ion phosphate battery and an on-board petrol engine generator for recharging on the move. According to the company, Tata Megapixel offers a range of up to 900 km (with a single tank of fuel) and fuel economy of 100 km/litre (under battery only power).

Last year at the 81st Geneva Motor Show, Tata Motors had unveiled Tata Pixel, a city car concept for Europe. Pixel is yet to be commercially launched.

Speaking during the unveiling of Megapixel, Tata Motors Managing Director - India Operations Prakash M Telang said: "The Tata Megapixel, developed by our design centres in India, the UK and Italy, is our idea of a city car for discerning motorists in any megacity of the world.