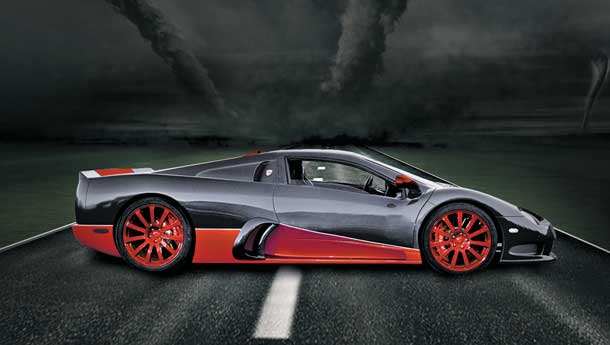 The folks at Guinness – you know, the guys who verify records of all sorts – recently triggered an internet blizzard, a virtual flurry of chatter and opinion, as they stripped the Bugatti Veyron SuperSport of its coveted title of the fastest production car in the world. The controversy revolved around the fact that even though the SuperSport hit a frankly ludicrous 430.9 kph, the production cars that the buffets of this world buy come with a speed restrictor, which only allows a measly 415 kph. That’s just slow, isn’t it? Still, after a few calls from the top brass at VW to ‘zink abous zis once again’, they backtracked and returned the trophy to the SuperSport, which was sitting in the corner sobbing.

Between all of this, the title was reclaimed by the (still) relatively unknown American missile, the SSC Aero, which had nailed a 412 kph run back in 2007. This Aero XT is a last hurrah for the line, a handful of cars built to show the world where the limit really is. Using mechanical bits borrowed from its next-generation Tuatara supercar, Aero claims its car will see the SuperSport’s record and raise it by another 9-odd kph. At the speeds we’re talking about, that’s a fair lead. Behind the seats lies a SSC-developed 7-litre, 1300 horsepower V8 thermonuclear device, and given its heady 9200 rpm rev limit, it will pull like a M16 round coming out of the barrel. It’s equipped with a 7-speed gearbox, a triple disc carbon clutch and other systems from the Tuatara. For a 1270 kg car, that is a serious amount of firepower.

From standstill, Aero claims it will hammer past 100 kph in 2.6 seconds and the insanity continues to come at you at warp speeds, because in precisely 15.5 seconds, it will hit (any guesses?) 322 kph! These are mere claims at this point, but since Aero was right about its top speeds back in ‘07, we’re guessing it doesn’t fool around.

Don’t imagine the Aero XT to be just a sparse race-car tub inside either – it’s got air-con, a navigation system, a nose-lift system, power windows and a reverse camera too! The kind of performance we’re seeing here is possible only with cutting-edge tech and design. The Aero XT’s aluminum space-frame supports a carbon-fibre body, the suspension comprises top-shelf, fully adjustable Penske units and the forged wheels come shod with Michelin PS2 rubber. There are a million other optimizations that go into achieving such speeds.

Its next supercar, the space-age Tuatara, is alleged to be even faster; we just cannot imagine what it will be like. Aero is suggesting that theoretically it will nail 444 kph (yes, 444!) and the only way to know for sure is to line up the Tuatara at an airstrip and mash the loud pedal. Only five will be built, and the earlier you order, the more money you save. Fair deal, we’d say.