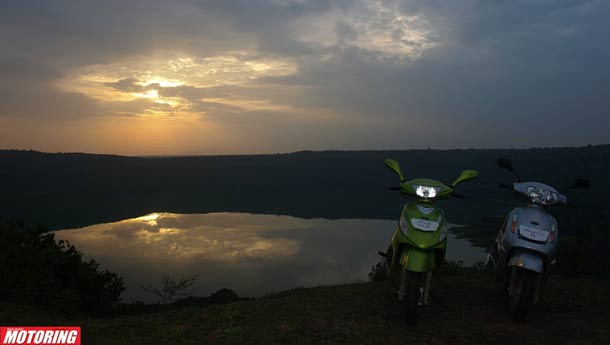 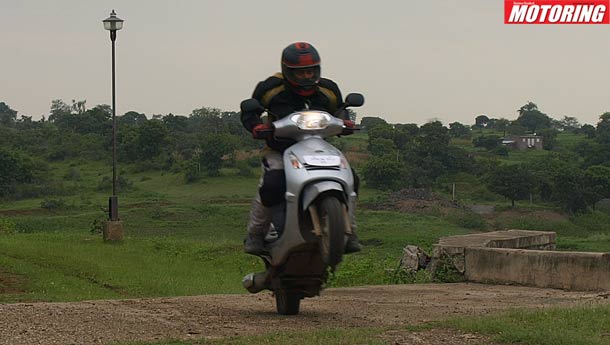 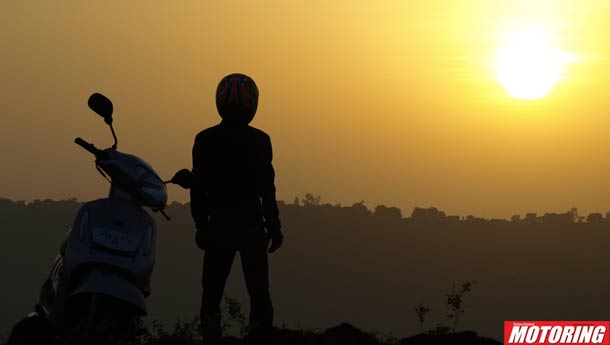 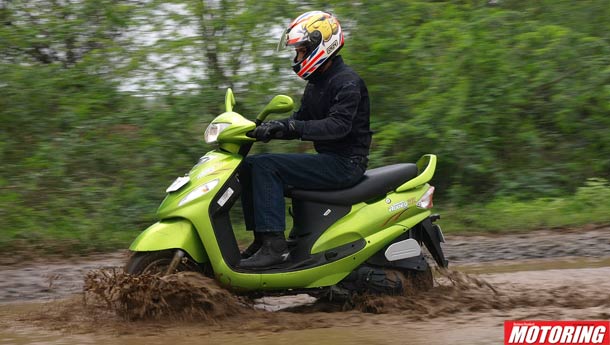 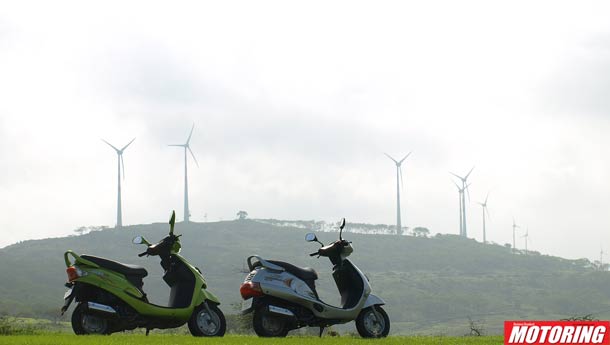 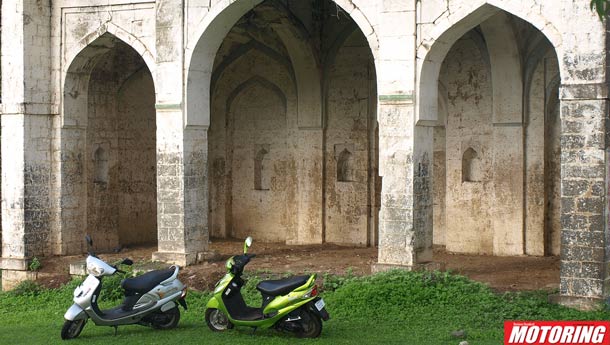 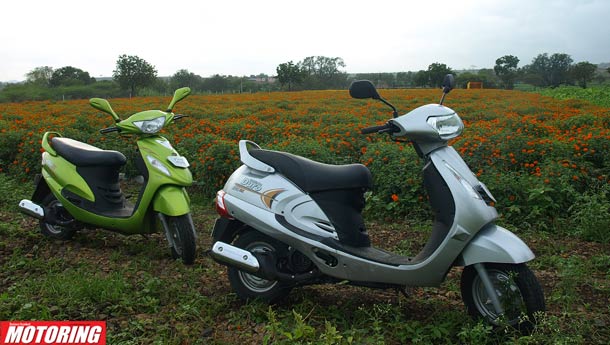 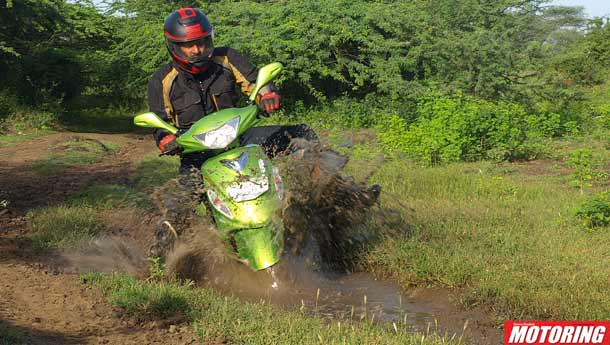 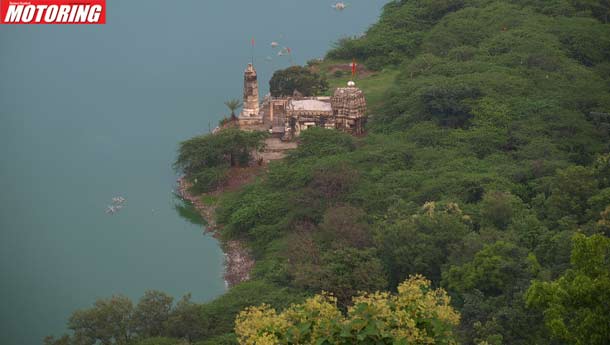 The story so far… We’ve ridden two of Mahindra’s Two Wheelers into the Indian hinterland. The destination is a Pleistocene era hole in the ground. A rather big hole that was formed when an otherworldly object came hurtling towards planet Earth. We’ve still got a daunting 250 clicks ahead of us, but the scooters are holding up just fine. The weather on the other hand is not. And the roads...?  From what we hear, they’re not the kind of surfaces these scooters were built to commute on. So will Mahindra’s flagship scooters make it to the Lonar Crater? Read on to find out.

It’s 6am and it’s clear that the rain gods have been at it all night. Ahmednagar is a watery mess with truck traffic clogging the streets. This little town, which was once known for being an impregnable city, now bears a run-into-the-ground look. So as our gleaming scooters made their way though town, heads automatically turned and locals raced alongside to shout out the usual questions – ‘Price? Fuel economy?’ Our answers left curious roadside companions quite shocked. Over 300 km to a full tank of gas is what the Duro DZ had been clocking so far and that too without breaking into so much as a sweat.

The little dargahs of Ahmednagar were soon fading in our rearview mirrors and we began to stretch our legs and the little scooters as the highway rolled out ahead of us. The 125cc engines on both the Duro DZ and the Rodeo RZ are not just built for cities and this is quite evident the way they just notch up the miles on an open road. It’s hardly any effort piloting these scooters across Highway 221. The eager 8 bhp engines are refined and responsive allowing smooth and easy overtaking even at higher speeds. It was a good breather from the chaos of the city and the Lonar Crater suddenly started to feel like it was within reach. How magnificent could a hole in the ground be? Pictures of the place made it look like it was a really large lake. So what makes it different from any other lake? For starters, it’s really far from anything else, but even more interestingly, the Lonar crater was formed in a basalt basin. So the lake in its bed is both saline and alkaline. This has allowed the crater to have its own ecosystem around and inside the 8 km circumference that comprises the rim of the crater: from a variety of trees that are found to be in concentric circles to a flourishing bacteria that sits under the greenish water of the lake.

My flow of thoughts was interrupted, as the tarmac appeared to abruptly come to an end and traffic slowed to a standstill as each vehicle manoeuvred around seemingly large potholes. We headed for the soft shoulder of the road. If we were going to ride in the dirt, we’d rather put it in the soft dirt than the hard, nasty ditches I thought.

Once again it was surprising to see how easily these scooters adapted to the changing terrain. The Duro DZ’s hefty size definitely inspired confidence in the dirt, but the nimble-footed Rodeo RZ, in good hands, gives the Duro DZ a run for its money. Both the Duro DZ and Rodeo RZ offer the highest ground clearance in the scooter segment and this gives them a clear advantage in conditions like these

A whole 78 km stretch from Paithan to Jalna was virtually non-existent. However we pretty much decided that forward was the only way to go on the Mahindra Endurance Scooter Run. So we charted our own path and the scooters went wherever we asked them to go without so much as a hint of complaint – through narrow village roads, sugarcane fields and some of the biggest potholes this side of the planet. What was even more commendable was that both the Duro DZ and the Rodeo RZ managed to bring the rider out through all of this in relative comfort. Their well set up suspensions, especially the modern front telescopic suspension, allows the rider to have motorcycle-like comfort and handling over any kind of terrain.

With the late-afternoon rain clouds looming right over us, we were still only at Jalna. After what seemed like an endless bashing we still had another good two hours on the road. It was time for a breather before we tackled the last leg of our journey. Just as we stopped to refuel, we were surrounded by a procession of villagers heading to the temple in their annual ritual to appease the rain god and ask for a healthy monsoon ahead. Could we somehow defer this petition to the gods, I asked in my head, just as the youngsters in the procession gathered around the Rodeo RZ and Duro DZ posing for pictures and asking a litany of questions. The whole procession came to a standstill with curious village folk assembled around us enquiring about our ‘journey to the centre of the earth’ and why these were the right scooters to take us there. The sleek-looking scooters were now well covered in mud, but they were still attention grabbers. Just goes to show how good looking both the Mahindra Duro DZ and Rodeo RZ are.

With the Duro DZ and Rodeo RZ now fuelled up, we were set to embark on our final leg of the journey. The road conditions were confirmed to be relatively better and the scooters were holding up well. Not to mention they had both returned a consistent 45 kpl through the journey so far. We had the Advanced Dual Curve Ignition Engine to thank for such high fuel economy figures.

As we rode on, the sense of excitement was building up and I for one expected the crater to magically rise up over the horizon. I mean, it’s an 8 km hole that’s about 500 feet deep. To put that into perspective, it’s like fitting Mumbai’s entire business district into the crater, and in order for any of the buildings to touch the top they’d have to be a minimum of 50-stories high.  With each passing mile the anticipation levels just kept building.

The mile marker now read ‘Lonar 5 km’ and there was still no sign of this extra terrestrial impact crater. The scooters had their throttles wrung and the speedometers needles pinned all the way to the top. It was as if we were racing to the finish line.  A finish line that was not quite visible. Then, finally, after the last right turn off the highway, we were riding up the sides of these low hills past lush green meadows, and bam! The massive crater unveiled itself.  It was like something right out of this world – the eerie greenish tinge to the water as the sun hung low right above the rim

of the crater. We had made it. More importantly, the Mahindra Duro DZ and Rodeo RZ made it here. In fine style, too. The Mahindra Scooters Endurance Run was now well endured and it was time to sit back with our trusty machines and enjoy what was a beautiful sunset over one of the most spectacular sights in this country, with two of the most capable scooters in the country right beside us.

The Duro DZ is a good looking scooter and riding it gives you that big scooter feel, which especially appeals to male riders. The clear-lens indicators and headlight add a touch of class to the Duro, while the tail-light is chunky and bright. The Duro DZ has ample under-seat storage, which is a plus for cross-country riders as well as in the city. But the highlight of the Duro DZ is the wide, comfortable seat, which gives the rider nothing to complain about even if you’re in the saddle for long. The telescopic forks also do their job really well especially on bad roads and even while going off road. The Duro DZ‘s 125cc engine is refined and has ample amounts of power while the ergonomics make it easy to manoeuvre though the city; however, the Rodeo RZ definitely scores over it in the handling department.

The Rodeo RZ is a sleek looking scooter, which is very stylish compared to other scooters in its segment. It’s also very compact to look at, but don’t be fooled by its appearance because this scooter definitely knows how to pack a punch. The digital instrument panel illuminates in seven colours, (one for each day of the week) and includes not only a speedometer but a tachometer, trip-meter, odometer, acceleration timer, fuel gauge, clock and a side stand down warning system, which is not seen in any other scooter in this segment. It also has a 12V charger-port and decent amount of storage space, which is illuminated so you’re not left hunting for your belongings in the dark. All of these extras are bound to earn brownie points for the Rodeo RZ when pitted against other scooters. The suspension again is a major plus point of Mahindra scooters, not only is the engine smooth, but the sorted suspension allows this scooter to tackle most roads no matter what condition. The 124cc engine that produces 8 bhp makes the Rodeo RZ a very nimble and quick scooter to go riding around in the city.