Adieu to the old and welcome the new 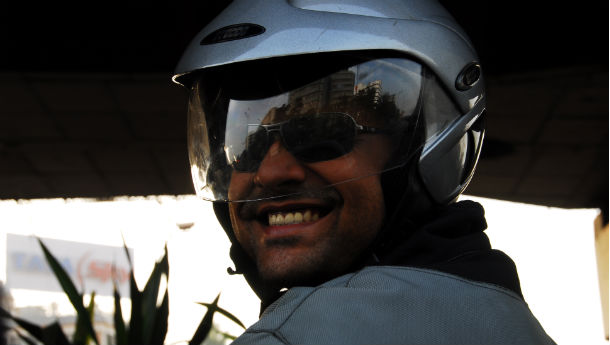 As I sit here typing this, I am in a rather pensive mood. The old 2012 is on its way out, and a new 2013 is rolling in. This is going to be an introspection, rather than my opinion. I apologise if you were expecting something else.

I turn 30 next year. Yeah, the big 30. Quite frankly, I don't really know where the time has gone. But I'm happy to note that almost every joyous moment that I can recollect from the not-so distant past has involved a pair of wheels.

No, I'm not making that up. I cannot remember the time I got my first PC, but the day I first balanced myself on two wheels well enough to run into an elderly neighbour moments later, is clear as day in my mind. It was aboard an old hand-me-down Hamilton cycle, its dark maroon paintwork patchy with wear. It took me a whole 4 hours and two skinned and bleeding knees to get to that point. I still have the scars. And the cycle.

Climbing aboard my dad's JAWA was a feat worthy of an award from the President before I turned 10, and my legs couldn't reach the ground when I was aboard. But I remember riding the machine up and down the compound, with my dad and his friend standing at either end to catch the bike and turn it around. Betsy, the 250, still has her place in our hearts. And the garage.

The friends that I used to cycle with have moved on. Most of them have moved abroad, some I just lost touch with. But I remember the day I got home Honey, my first motorcycle bought with largely my own savings and a small loan from my father, like it was just yesterday. Actually, it was a whole twelve years ago, on my eighteenth birthday. I recollect getting her home, and my dad proudly patting me on the back. I smiled and he had tears in his eyes.

I dated my first girlfriend this year, but I can't recollect a single thing about her, other than the fact I used to be terrified of her Brigadier dad. If you are reading this, it's good to know you are still around. I genuinely hope you're living a good life! I also bought my first tape (too early for CDs) - the tribute to Black Sabbath called 'Nativity in Black'. This was from before Ozzy Osbourne turned into a softy reality TV star.

Two whole months later, I took my first road trip on my own. My mother held back tears when I left early in the morning, before dawn broke. It was a ride to Ladakh. I suspect they were tears of joy, her little lad finally taking flight into the big bad world, far away from the security and comfort of the home that she and my dad had built for us.

Soon enough, I was working. All I remember about that job is that I worked my rear end off, learned a lot about working on cars from a man called Ram Singh, aka 'Chacha'. And that it paid little or nothing and the boss was a slave driver. But I remember getting my first taste of explosive motorcycles astride my brother's RD 350. It was 3 in the morning when he brought it home after buying it from a guy in Pune. And he woke me up, and putting on my shoes and helmet, I got my first taste of two-stroke dementia that morning. I've been hooked ever since.

Then, BS Motoring happened almost five years ago. Bijoy and Srini interviewed me. It went like this...

Bijoy: So Kyle, what is your favourite motorcycle?

Me: I don't have a single favourite sir. But I do have a few in mind that I'd bend over backwards to have in my garage. But I'll say this, the list is topped by the Vincents, the Brough Superiors and the Scotts.

Bijoy: Can you start off here tomorrow? And don't address me as 'sir', just Bijoy.

Srini just smiled and asked if I could wheelie a motorcycle. I thought it was a trick question and told him that I could if I was required to. And I've been smiling ever since.

Yes, I turn 30 next year, a new beginning that begins in just a few days. I'm just hoping that I'll be thinking on the same lines at this time in 2013. Happy to be alive. Happier to be riding. Here's wishing you all a very happy new year!