Absent without leave - Wine not? 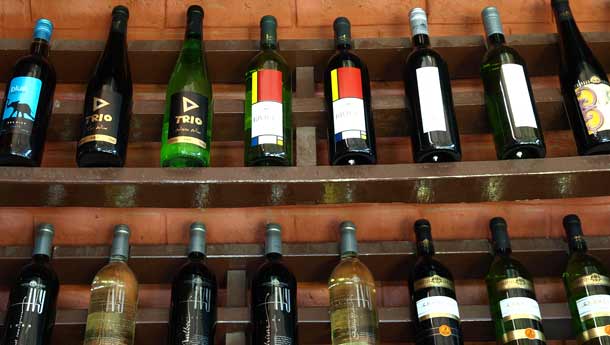 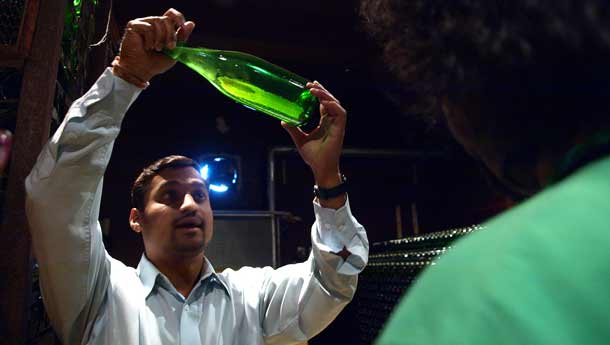 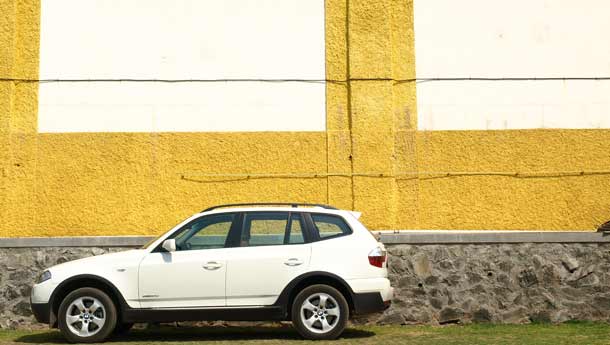 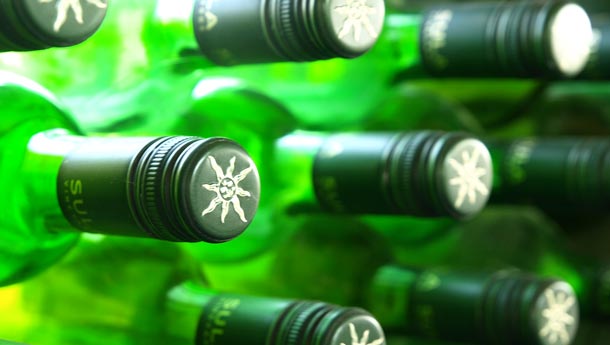 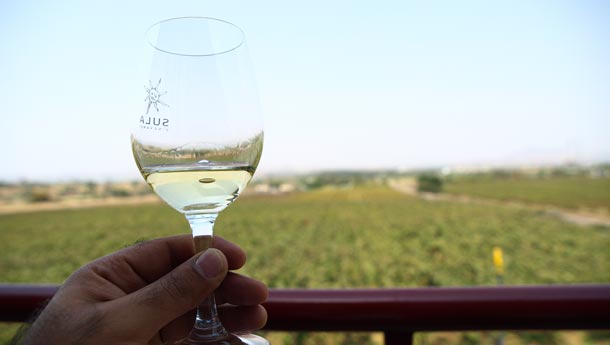 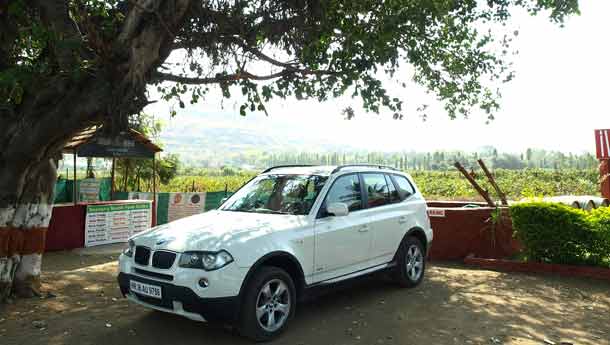 Somebody with a keenly developed sense of humour once said 'There are only three kinds of wine. 1/ I like it 2/ I don't like it 3/ I'll drink it if someone else is paying for it'. This someone was allegedly a wine connoisseur, so a certain amount of weight is to be lent to these words. At any rate, they neatly sum up my own attitude to wine – I can take the stuff or leave it, and I usually leave it. To begin with, I'm not much of a drinker (Yeah, right – the BSM mob, close friends and other acquaintances) and when I do partake, I prefer liquids such as light, crisp beers or white spirits like vodka and gin. These beverages are relatively straightforward; in my limited experience (Yeah, right – the BSM mob, close friends and other acquaintances), they come in only one or two colours, fragrances and consistencies. Wine, on the other hand, appears to come with entire brochures attached; it's complicated stuff, and best left to people who can combine the words 'bouquet', 'tannin levels', 'residual sugar' and 'full-bodied' in the same sentence - or so I used to think, anyway. One day, I sat up and told myself that it was important to shed preconceptions and broaden my world view (Yeah, right – the BSM mob, close friends and other acquaintances) and so I did what any self-respecting writer would do in these situations – got a colleague with contacts (Srini, in this case – he has more contacts than Bausch & Lomb) to organise a tour of India's most well-known vineyards.

An invigorating blast in a BMW X3 later, I was at the gates of the Chateau Indage vineyard in Narayangaon, near Pune. This was by no means the first time that BSM was making an entrance here – six years ago, Bijoy, Srini and Param had showed up in a Mercedes-Benz S320, gotten comprehensively irrigated and written a story on the big Merc on the side.   I had much the same agenda – write a separate story on the Beemer and gain as much of an education on wine as was possible in a couple of days. I had certainly come to the right place – Chateau Indage is India's oldest wine-making house, having been established in 1982. 27 years of fermenting grape juice and bottling the stuff should give anyone a degree of expertise, so I looked forward to a sampling of their range.

Sitting myself down at Ivy, their restaurant and wine bar, I asked for advice on what wine to order. The waiters, locals by the looks of it, were obviously genned up on their wines. 'Sir, it all depends on the food that you order. If you're having heavier, richer food, then a red wine will go with it. A white wine will taste best with lighter food, like grilled chicken or fish.' I wasn't in the mood for the heavy artillery, so I ordered some lightly grilled kababs of various sorts and went with a glass of their Chantilli Sauvignon Blanc, a dry white. Now, as I mentioned earlier, I wasn't much of a wine guy, but  I was now determined to try and treat this as as exercise in developing my palate. I concentrated on the flavours coming through, and I began to detect a slightly grassy tone, along with hints of citrus fruits and peach, and the overall taste was fairly lean and crisp. Good heavens, I was beginning to sound like a...a... wine person! Encouraged, I moved on to a chilled glass of Chenin Blanc (sweeter than the Sauvignon Blanc and slightly flatter) and then a round of Chardonnay. Now, Chardonnay is the world's most popular white wine, and is considered by many to be the greatest white wine too; the one I was drinking had an extremely elegant taste, with elements of apple and melon in it, along with a touch of oak. Of course, I had no idea if I was actually being accurate – these were merely my own impressions when I tasted the wine. I finished off with a glass of White Zinfandel, which is what is called a rose wine because of its pink appearance. Zinfandel grapes originated in California, and although it's hugely popular, it isn't considered a 'serious' wine.   I'm not sure why, because I liked it the best of the lot – it was deliciously fruity, with strong hints of strawberry and cherry as well as citrus, and it went down a treat in the heat of the afternoon. There you go – one person's 'non-serious' wine is another's top of the pops; a lesson well-learnt.

A tour of the Chateau Indage winery revealed more nuggets of information. 'Most of the classic wines of the world come from what are called noble varieties of grapes, such as Cabernet Sauvignon, Merlot, Pinot Noir and Shiraz for red wines and Chardonnay, Riesling, Chenin Blanc and Sauvignon Blanc for white wines' explained Gokul, my guide around the winery. 'So what are the factors that make a Merlot from India taste different from a Merlot from, say, France?' I asked. 'Lots of factors.The soil in the vineyard, the area's climate, the age of the vine, the expertise of the winemaker, the winery's equipment – all of these influence the final product. Oh, and to give you the most basic fact, all grape juice, whether it's from a red or white grape, is relatively colourless. To make a red wine, the skins of the grapes are included in the fermentation process, and they add their own flavours. White wine can be made from any grapes, because the skins are discarded.' 'And a rose, therefore - ' 'Yes, with a rose like  our White Zinfandel, the skins are quickly removed from the red Zinfandel grapes during the crushing process, so you get a blush, or rose wine.' 'And how do you discern which part of the world a wine is from?' I queried. 'Wines from the so-called Old World, like France, Italy and Spain, are named after the region where the grapes are grown, whereas with New World regions like India, USA and South Africa, they're named after the grape. So our Chardonnay is sold under that name, but a French wine made from Chardonnay grapes might be called a Chablis, among other names.' I told you, wine is complicated stuff – but I found I was getting a hang of it quite rapidly.   My baby steps into the befuddling world of wine continued apace the next day, at the Sula vineyards near Nashik. Sula is a relative newcomer to the wine business compared to Chateau Indage, having begun operations in 1996, and perhaps because of that fact, they're much more PR savvy and their products are aggressively marketed. In their wine tasting section, on a pleasant verandah at their winery, I was introduced to the fine art of wine tasting. The entire process, to an outsider (like me), might seem like one, long affectation, but there's method behind it.

First, you hold up the glass and examine the wine's colour, preferably against a white background. If it's a red wine, is it maroon, purple, brick-ish or even brown? If white, is it pale straw, light green, amber or even brown? Are there sediments in it or is it clear? Then, you swirl the wine around in the glass (and run the risk of looking like a complete fop), in order to help release its aromas, and take a deep sniff into the glass. Do you smell citrus, oak, grass, flowers, vanilla? Take a second sniff and see if you can discern other elements. Having done this, you then take your first sip of the wine, rolling it around your mouth. The 'attack' phase of the tasting process tells you about the wine's acidity, tannin levels, alcohol content and so on; ideally, these elements should be well balanced. The 'evolution' phase is what the wine actually tastes like on the palate; this is where you determine if you can taste oak, citrus, pepper and other spices, berries, honey, herbs, apples and so forth. The 'finish' phase is about how long the wine's flavour lasts, and about the sort of aftertaste it leaves – dry, bitter, light or full bodied and so on. All of this sounds rather complicated, but again, I found that I got the hang of it quite quickly, and that I was able to pinpoint various flavours in the wines that I was tasting in a manner I hadn't thought possible. Well, well, well... there was more to this wine business than I had previously thought. It wasn't just about spouting a lot of technical jargon and making yourself seem like a know-it-all. Drinking wine was definitely more than that – it was an experience to be savoured with an open and inquiring mind. I'm hooked, that's for sure. Hic.