A6 all the way 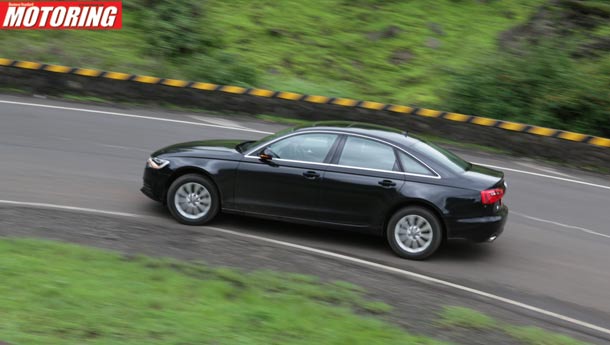 One of the great things about writing road-trip stories (apart from the obvious benefit of being able to travel for a living) is that when I set out on a trip, I’m able to put a car through its paces in real-world conditions – and I mean really put it through its paces. It’s one thing to get a car for a day or two, test it, photograph it and then reluctantly (or otherwise) give it back; it’s quite another to grab a car by the scruff of its neck and say ‘Right, let’s go on a 1,300 km trip, through all sorts of road conditions, and then we’ll see what you’re all about.’

So it transpired that a couple of weeks ago, the good folk at Audi handed me an A6 3.0TDI in which to drive to Goa. I appear to have some sort of Audi connection with regard to that state, since the last time I drove there, it was in the previous generation A6 2.7TDI – but anyway, that’s just an aside. The new A6, as you know, is the current BSM Premium COTY (Audi walked off with two awards this year, with a gong for the A8 as well), and that’s a serious piece of crown to be wearing, since we don’t give our awards out to just any old thing with an engine. I’d driven the car briefly during our evaluation sessions, and I remember being impressed with the way it felt, so a chance to go on a long drive in it was welcome.

I may as well start at the end and tell you that the damn thing is brilliant – it fully deserves its position as the best premium car you can currently buy. I’m not the biggest fan of the way it looks, I have to say – the Audi ‘family resemblance’ thing can get a little jaded, and it’s not a beautiful car, in the conventional sense of the word (something its cousin, the A7, somehow manages with great success). It has a slightly menacing presence, and people do turn and look at it, so the overall styling package does work, but it’s what the car is capable of that’s the real meat of the matter.

To begin with, that 3.0TDI engine is a bomb of the utmost refinement – it’s almost at work-of-art levels. At start up, it growls menacingly, with none of the clatter you would expect of a diesel engine (the BMW 5 Series diesel, for example, is noisier), and if you’re inside the cabin, you can barely hear the powerplant. With 244 bhp and 51 kgm, there’s so much shove available at every segment of the rev range that you don’t even have to think about it – just point and shoot, literally. It barely breaks a sweat holding a steady 185 kph, and overtaking manoeuvres are dismissed in the blink of an eye. The gearbox is similarly excellent, matching the engine step for step. As a consummate country-crosser, the A6 is very, very good!

The cabin is beautifully made, with a high level of fit, finish and materials used, and it’s a great place to spend a few hours. I drove solo throughout my 1,300 km trip, and apart from a twinge or two, I was never tired out from the driving effort. My passengers had no cause for complaint either, and were full of praise for the way the car kept them isolated from all the bumps and undulations we came across. The audio system, though, can be a little maddening to operate (the 6-disc changer in particular), and surely a car in this price bracket should have seat coolers, USB and AUX ports and keyless entry?

The A6 hits a sweet spot between ride and handling capabilities, managing to offer all things to all people. With Audi Drive Select and the capability to choose your own mix of engine/gearbox, steering and suspension settings, you can put the A6 through a variety of real-world road conditions, and it takes them all on in an impressive manner. I drove through some rather broken stretches of road during my trip, on which I would normally have felt a bit nervous about the car scraping its belly, but unless you’re driving through full-on craters, the A6 is quite capable of taking on our roads.

Perhaps the best part of the package is this. When I reached Goa, I was astounded to find that I had used only half a tank of diesel (40 litres) to cover 600 km, which works out to 15 kpl. For a big, fast, heavy car, driven mostly at a high rate of knots, that’s a fantastic figure. Petrol? What’s that?