A Twist to Nano's challenge for Maruti, Hyundai 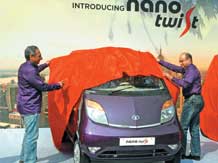 The Tata Nano, India's most affordable car, took a step towards shedding its cheap-car image and becoming a full-fledged city car. It is also a step closer to meet the goal its manufacturer, Tata Motors (Tata), has been working towards for over a year.

Tata launched a new variant called Twist or the XT, which is complete with electronic power-assisted steering, new instrument cluster with a trip computer, keyless entry and driver information system.

Ratan Tata, chairman emeritus of the Tata group, had admitted that calling the Nano the 'cheapest car' was a mistake. Nano's affordable price tag had reduced it to an undesirable product among potential customers looking to upgrade from a two-wheeler. They were, after all, looking to buy an as pirational vehicle with the usual comforts.

Its latest campaign had portrayed city-slickers in an effort to bill the Nano as a 'smart city car' for the younger lot. "Earlier, we were basing it more on the rational reason of pricing...But now we are looking more at the emotional connect," a Tata Motors spokesperson had said earlier.

A standard feature on most cars, Nano has got its power steering only after completing nearly five years. However, the feature has been introduced due to the need to reposition the vehicle as a regular city car rather than a  technical necessity.

"For a car which weighs 600 kg, the driver does not need a power steering because the steering is light anyway. But the feature is linked to the aspirations of the buyer and she should not feel her car is any less than a competitor's car", says a Tata Motors official on the condition of anonymity.

Tata has lined up more beefed-up variants for the mini car in the next few months such as an airbag variant and a more powerful engine variant, all of which will challenge Maruti's Alto and Hyundai Motor India's Eon.

The expected feature upgrades will result in a sharp increase in the Nano's pricing, which is expected to cross Rs 300,000. That is three times the first, much-touted price-tag sported by the Nano in early-2009, when the car was commercially launched.

"Prices will go up with added features. We will launch one with a bigger engine to take on the Alto and Eon. The intent is to bring the car back in the reckoning," says the same Tata Motors official.

The new instrument cluster in the Twist displays information like distance to empty (fuel), average fuel efficiency, and has an LED fuel gauge and a coolant temperature gauge. Twin glove boxes, a four-speaker AmphiStream music system with Bluetooth, USB and auxiliary connectivity and a new colour - Damson Purple - complete the package.

Ankush Arora, senior vice-president and head commercial - passenger vehicle business unit says, "Today 55 per cent of India's population is below the age of 25 years. The new features in the XT variant is a result of extensive customer research. The most common feedback we got was that the Nano should have a power steering option. About 50 per cent of total Nano sales came from the top variant. We are expecting that the XT would now command a 50 per cent share".

As upgrades to a power steering go, the Twist may cost Rs 15,000 more than the LX, but the difference is less than a similar upgrade on the Maruti Suzuki Alto800 that costs Rs 22,600 more.

The Nano has seen a flurry of refreshes since 2009: Variants have sported new colours, features, a CNG option and innovative finance options.

However, with December, 2013 sales closing at 554 units, which was Nano's second-worst monthly tally since launch, Tata is keen to revive the brand's fortunes. Domestic sales in April-December, 2013, stood at 13,931 units, a drop of 72 per cent when compared to last year that registered sale of 49,332 Nanos, according to the Society of Indian Automobile Manufacturers.

However, the segment a size larger than the Nano, comprising Chevrolet Spark, Hyundai Santro and Eon, Maruti Suzuki 800, A-star, Alto and Wagon R, posted a growth of 5 per cent during the same nine months at 418,341 units as against 398,832 units the year before.