A car for the heart 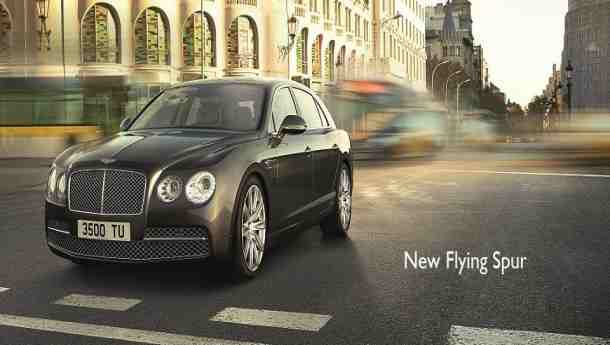 Who says it is only the German sedan that leaves everything behind in its wake? Here is the Flying Spur, all luxury, all craftsmanship, all speed - and made in Britain. The new Bentley is easily a ticket to the millionaires' club. But, what makes this sedan so exclusive that the sheikhs of West Asia, oil magnates, corporate honchos, world leaders and Hollywood movie stars love to be seen in it? In one word, class.

This English machine's new design is a melding of crisp Italian formality and playful American sportiness. The A-pillar slants in such a manner as to complement the aerodynamics of the aptly named Flying Spur. Chris Buxton, regional manager, West Asia, Africa and India, Bentley, explains: "Part of the Bentley DNA is performance. So the engineering of the car has to be lower and wider plus everyone wants to attract the younger market." Remarkably, despite becoming slightly bigger than its earlier avatar, the new Flying Spur is 50 kg lighter. A lot has to do with the precise planning of its body shell, which is stronger and comes with additional refinement measures and enhanced technology goodies. "The car industry uses steel and so have we. But where we felt we didn't need strength, we have used aluminium," says Buxton. So you find aluminium in the front and rear fenders, while the boot is made of a composite. "This allows radio signals to pass through which facilitates receipt of Wi-Fi signals. Yet the new Flying Spur is a lot stiffer than the outgoing generation," adds Burton.

Bentley is known for its handcrafted art work. By this we mean customisation and the work inside the cabin. "No Bentley is the same. Each car has a personalised touch to it," claims Buxton. Each and everything can be made according to the buyer's fancy. So much so that Bentley even changes the leather upholstery's stitching according to demand. But the first set of sewing is always cross stitched like a shoelace but this cannot be seen as it lies under the actual choice of upholstery. Even though Bentley is tight-lipped about the price of personalising the car, it is a fact that each wooden panel, choice of leather, even the exterior colour can all be done up according to the customer's wish. "Unlike at other car manufacturers, at the Bentley factory there is only one robot. The entire process of preparing the specially chosen wood for the interiors takes about 13 weeks," says a company executive. He adds, "The leather used in the car takes another six weeks to work on. The entire process take six months."

Buxton explains how seriously Bentley takes the word 'exclusivity'. "Once a Saudi princess wanted an Arnage in her nail-polish colour and as she could not name the colour, a Bentley executive had to fly down to West Asia and get his nails painted. Then he flew back to the factory in UK where they scanned the colour and sent a piece metal with that colour to the princess for approval. As was expected, Bentley had got it dead right. It took the company a year to complete this project. This just shows how passionate we are in adding a personal touch to the buyer's car."

Coming back to the new Flying Spur, be it the wind or the engine noise, the designers have used acoustic panels so that no ingressive noise can be heard. This is something that wasn't even there in the previous version. It means the noise within is so low that people can have a perfectly audible conversation.

When it comes to the heart, the Flying Spur believes in living up to its name with a colossal 6.0-litre W12 engine which generates 616 BHP of power. The Flying Spur can do 0-100 km in just 4.3 seconds. So to handle the power you need a sophisticated gear box and the eight-speed quick shift automatic transmission compliments it. "The traditional automatics change gears step by step, but our automatic box changes directly from 6th gear to 4th," informs Buxton. The computer understands the need of the hour if you are slamming the brakes so it quickly changes gears without wasting any time. The same is the case with accelerating, and the drivers doesn't feel the change of gears.

For all these, you pay a king's ransom of Rs 3.1 crore. But as a Bentley executive says, "Each Bentley is made for one person and our customers buy our cars more from the heart than the head."