A brand of many firsts, the JK Group trying to live up to its legacy

Last year, as the JK Group celebrated its 135th founder’s day, it was also a personal milestone for its patriarch Raghupati Singhania, whose association with the company neared the 50-year mark.

From the time he joined the company in 1970 at a young age of 22, Raghupati learnt everything on the job.

He got so engrossed in the daily works of the group and its rapid expansion across diversified sectors that his plan of pursuing an MBA from MIT did not materialise.

However, the senior Singhania is now busy passing on all the knowledge he gathered over half a century to his grandson, Chaitanya Hari Singhania, a Yale graduate, who is the son of his nephew Harshpati Singhania.

“The young generation is better qualified than me in a sense...But grooming is a hands-on experience. We have all been groomed on the job,” Raghupati said.

The British-era company, which started as textiles business, has diversified significantly into other businesses to become the conglomerate it is today.

The Street in which the company headquarters sits has a distinct stamp of one of its most successful operations, JK Tyre, which makes up over a third of its total revenues.

The nearest Metro station of ITO wears the brand name and colours of JK Tyre – yellow and black. Most vendors on the street go about their business sitting under the shade of the JK Group umbrella.

On its other business, including auto components, Raghupati says, “There is not a vehicle in India without a JK product.”

However, the next goal is to go beyond its usual capital intensive businesses and get into something more consumer facing. To this effect, the group just acquired a snack food business — Fun Flips. It is also working on a project to get into the back-end of the food processing industry.

Why the shift? While one reason the company feels is that the consumer side of the business is growing at a faster pace, the other has to do with faster returns on investments.

Harshpati, managing director, JK Group, said, “Cost of money in India is fairly high. In a capital-intensive businesses you make big investments and then wait several years before you start getting returns out of that and then you invest again. As a group, because we are diversified, we are trying to ask ourselves what are less capital intensive businesses.” Naushad Forbes, former chairman of CII and chairman of Forbes Marshall, said many of the old family-run businesses started in the commodity sector and later got into more consumer facing businesses.

“It has helped companies create brand value. Companies such as the JK Group should not be judged by the business they started with but the areas they got into much later,” he said. He said that the older companies learnt to compete in the licence raj and some of them could transition into a time where there is so much global and domestic competition.

Over the past few years, the JK Group has entered into the dairy industry and hybrid seeds business. 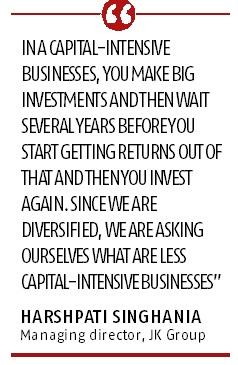 “You would appreciate that we would not put the money until and unless things improved. However, we have continuous growth plans,” the senior Singhania said.

The group, with a total revenue of Rs 26,000 crore, has doubled profits and increased sales by 70 per cent, in the last five years. As the company plans to invest ‘judiciously’ in view of the current slowdown in the economy, it has had to put on hold some of its plans.

For instance, its Rs 1,000 crore investment in boosting its truck radial capacity has been postponed by two years due to the slowdown. “In order to help ourselves, we have put a bigger thrust in the replacement market and doubled our push on exports. There is certainly a concern but market growth should come back,” Harshpati said.

For now, besides the tyre business, there are three main focus areas the company is betting on – paper, cement and JK Fenner, which is into manufacturing auto components.

Last year, the JK Group acquired the ailing Sirpur Paper Mill through the corporate insolvency resolution process.  The increase in demand for its paper products from the pharma, cosmetics and ecommerce industries has encouraged the company to set up a new paper board plant and a pulp mill with an overall investment of over Rs 1,700 crore.

In the cement business, the company recently revived and recommissioned one of its plants in Rajasthan.

“While it is an ongoing process, in the last two years, we have focused a lot of attention internally to improve our efficiency. Not just the slowdown, but also the technology is now affording us an opportunity,” Harshpati said.

Deploying technology such as automated sensors and machinery in its factories, the company, in its tyre and cement business, has started geotagging its customers and dealers. Through this, it is heat mapping clusters to better understand its customer needs and improve processes.

“We are continuously reinventing ourselves in terms of every product we make, whether it’s tyres or paper. We were the first to introduce radial technology for four wheelers in India way back in the 1970s,” Harshpati said.

The 1970s era of the JK Group is still something senior Singhania (Raghupati) draws inspiration from. Its slogan of import substitution in those days has again become the flavour of the season with Make in India.

He added, “We were among the first groups in India who truly brought that concept to life.”

There were uncertainties even then. He recalls a particular incident of 1980 when one morning he found that his three-year-old Rajasthan tyre plant had got shut due to an unprecedented power cut in the state. “In the last 50 years, according to data, we had checked Rajasthan had a record of zero power cuts. So, we did not even put up generators...We were aghast.”

Raghupati, along with his brother, then located four generators of 4 mega watt each in the US and air freighted them by chartering two jumbo jets. Within 21 days, the plant was back in business. “I am trying to illustrate that challenges come your way but you’ve got to adapt and find a solution. You cannot afford to fail,” he said.

Over 13 years ago, the JK Group underwent a corporate restructuring to have more focus on manufacturing companies and untangle cross holdings. “Each business now is a different company, different vertical and management,” he said.

The next big dream for the septuagenarian is to become a market leader in all sectors it has a presence. “We want to excel in what we do. It does not mean we want to be the largest.”

To achieve this, although the Singhania family is highly involved in the functioning of the group such as strategic planning, setting a direction and financial aspects. It has hired a team of professionals from the best of global universities to run the group. “We are an interesting hybrid of family and professionals. Each company is run by professionals on a day-to-day basis...We don’t interfere in that,” Raghupati said.

The group, as a whole, employs nearly 35,000 people. Going forward, the idea is minimal addition to work force and more and more technology deployment.

As for Raghupati himself, there are no plans to hang the boots, just yet. “Let’s see how long I survive,” he said.

For the JK Group, which prides itself in many firsts, the challenge now is to live up to its own legacy.