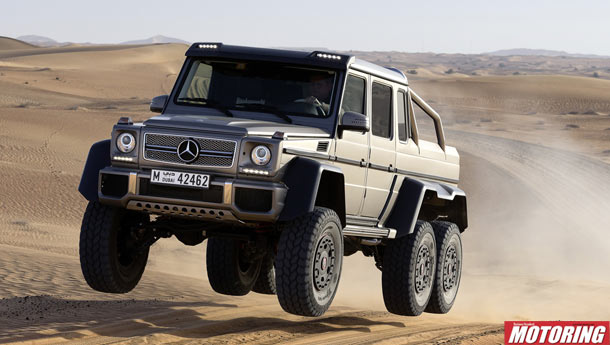 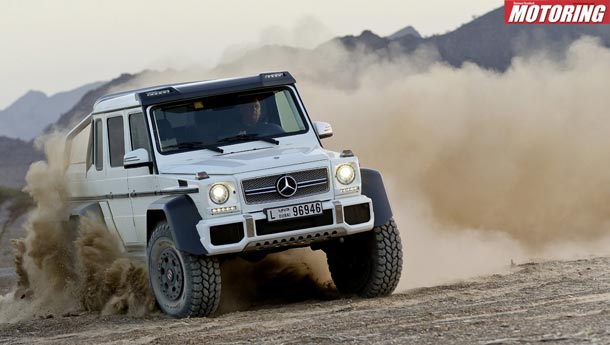 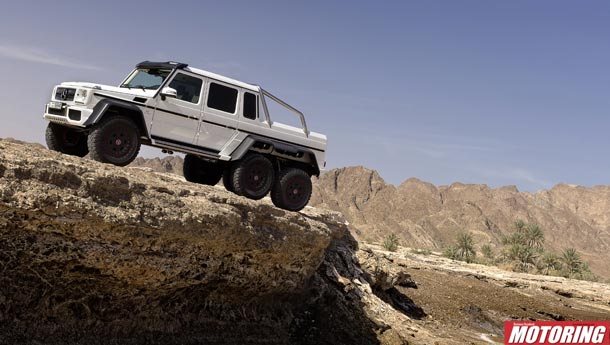 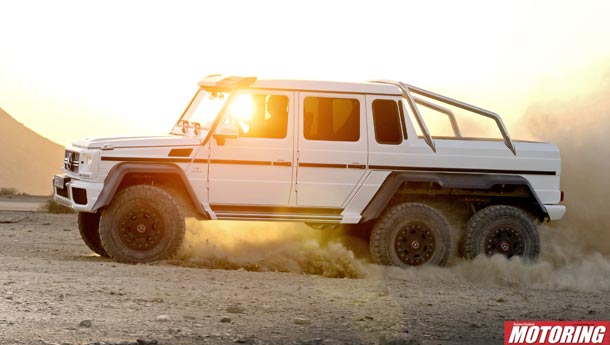 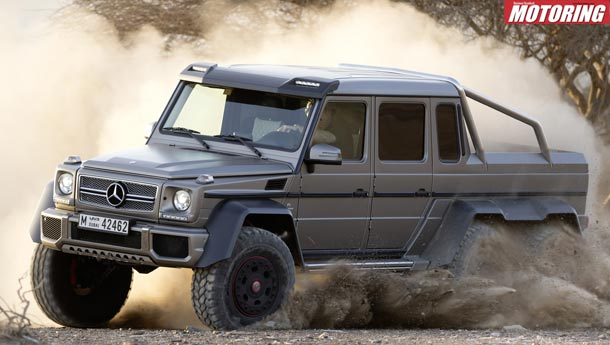 In a world where the automotive enthusiast is intravenously injected a constant supply of new Lamborghinis, exotic handmade road-rockets and GT3RS Porsches, creating something with shock-value is harder than ever. The folks at Affalterbach had no such problems, though. They simply took an insanely capable military truck, put a whacking great AMG-fettled V8 in it and gave it a comfy, luxurious interior to make this, the G63 6x6, pretty much the most jaw-droppingly awesome thing we’ve seen in a while.

Now, ardent fans of the G-Wagon will know that Magna-Steyr hand-builds G-Wagens back in Austria, be it for the road or the Army. For the Australian army, they already had a 6x6 twin-axle G-Wagen ready to push into duty, so when it came to making a truck with more shock value than Lady Gaga, they used that as a base and got going.

Being AMG, the engineers didn’t stick to the 3.0-litre diesel and instead, they plonked in the standard-issue AMG twin-turbo 5.5-litre V8. The 536 horses that the powerplant delivers is put down to the ground via a 7G Tronic seven-speed tranny and a very, very capable all-wheel drive system. To pretty much pummel anything that comes in its path, the 6x6 features a low-ratio gearbox, Ohlins suspension, more than generous amounts of ground clearance, five differential locks including separate ones for the each of the rear axles, 37-inch wheels and a central tyre-inflation system. All this certainly helps when you’re taking a 3.8-tonne pickup off the road. Various military forces around the world trust it, so we don’t think you’ll have much to complain about.

For all its off-road capabilities and 3.7 tonne weight, it will hit 100 kph from standstill in six seconds flat. That said, the top speed had to limited to 160 kph due to the tyres. It’ll be excellent doing rounds around Sheikh-country as well, with well-appointmented, well-built interiors and flashy but not completely gaudy exterior detailing. The Arabs, no doubt, will find it way too conservative and they’ll take up the bling factor by a factor of 10 so that onlookers are at least partially blinded by it, a rough indicator of a good car in that part of the world.

The best part is that they’re not just building a factory one-off to tease everyone else who cannot drive it. They’re actually going to put it into production and at $525,595 (Rs 2.8 crores), you better have a lot of oil-wells to your name. If you manage to score one of the 20 or 30 built, the landed cost will be close to Rs 5 crores in India. Affordable...if you’re one of the Ambanis.