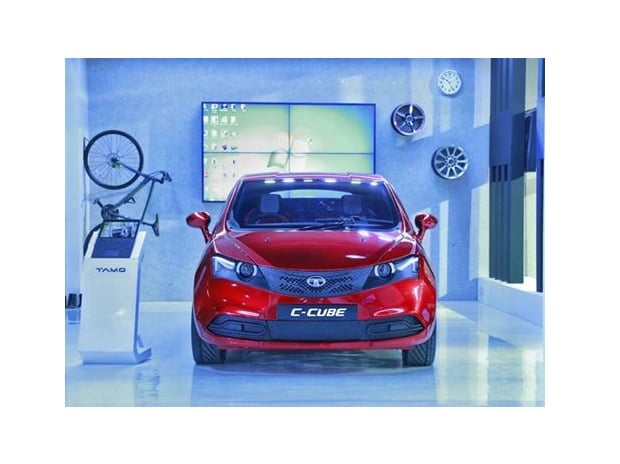 Tata Motors has teased images of the C-Cube, its latest concept two-door hatchback, on its Facebook page. According to reports, the concept car is part of Tata Motor's new sub-brand "Tamo".

According to the Asian Age, the hatch is on display at the Future Decoded 2017 event hosted by Microsoft India. As reported earlier, Tata Motors has partnered with Microsoft to work on connected cars.


Tamo, the sub-brand, will be an individual company that will work on more car projects with a smaller team, online automobile site motoroctane.com reported.


Here's all you need to know about the C-Cube:


1) ‘Advanced structural technology’: The concept car is based on an "advanced modular platform", on which eight new small cars would be based, reported motoroctane. Asian Age added that the brand has claimed that the concept is based on "advanced structural technology", without giving out any details. However, the news report said that it possibly referred to "high strength, low weight" design and materials.


3) It might be going to Geneva: According to reports across media houses, the Tamo C-Cube might be showcased at the 2017 Geneva Motor Show. While announcing the collaboration, the two companies had said that the first vehicle showcasing the vision of the enhanced driving experiences would be unveiled at the Geneva International Motor show on March 7.


4) Three, not two, doors: According to indianautosblog.com, the concept is a compact three-door hatchback with a cab-forward design.


5) Small but not common: While the concept car falls firmly in the small-sized car segment, which is the budget-end of the automobile market, Tata Motors, according to The Times of India, has said that the Tamo brand, and the C-Cube by extension, would target a "niche segment with technologies that are ahead of market".