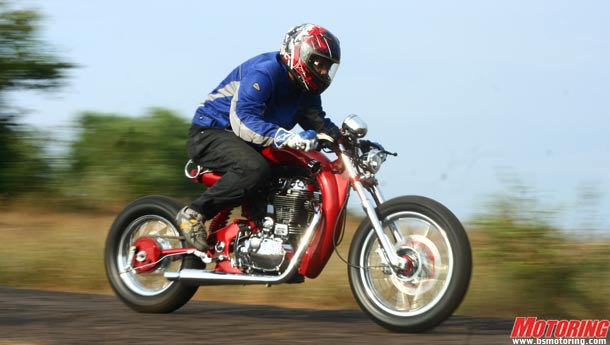 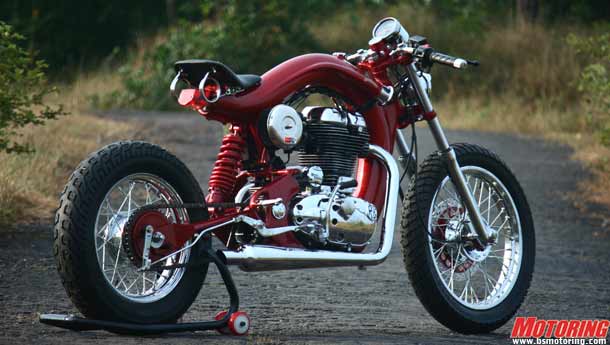 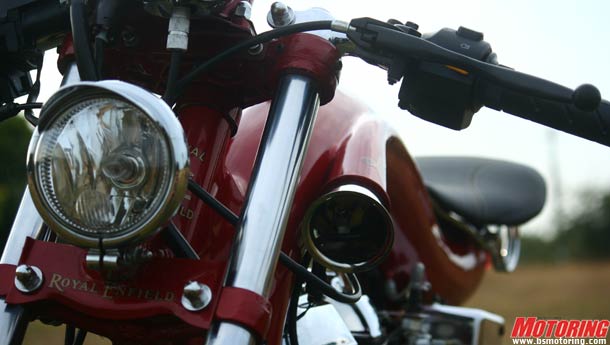 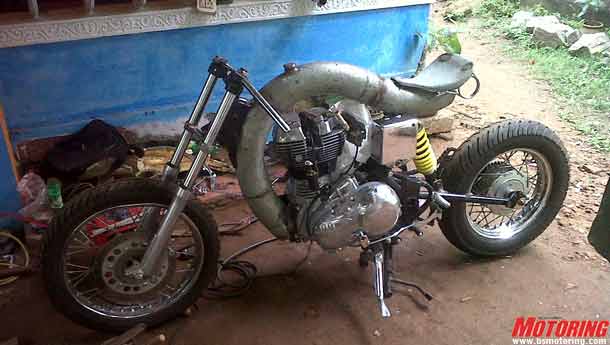 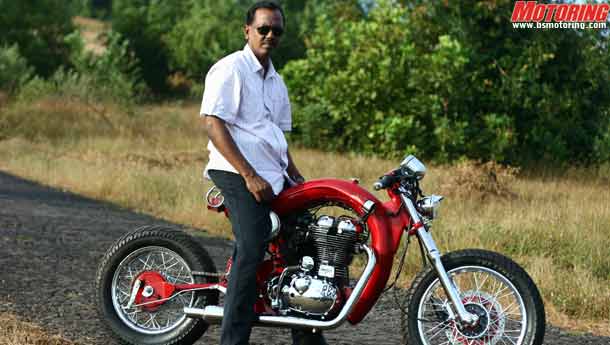 Now, we’ve seen our share of modded Bullets. And we’ve laughed at them, gawked at them and done everything in between as well. But this, the 3C, is the weirdest, and one of the best Bullet mods we’ve ever seen. And it’s certainly the most different. Based around RE’s latest UCE engine, this motorcycle is a shocker and it won the most popular bike award and second prize for modded bikes at the 2010 edition of Rider Mania. Watching the jaws of been-there-done-that Bullet riders hit the ground was reason enough for us to do a feature on this one.

According to Javeen Mathew, 3C stands for ‘custom,’ ‘classic’ and ‘concept.’ The whole idea was to fuse these three elements into one Royal Enfield. This bike is all about the chassis, which steals the show at gunpoint. Since there was a big question mark in Javeen’s head as to how he’d achieve this, he shaped the chassis in the form of a question mark! It’s made out of four-inch galvanised iron pipe, mated to the bottom portion of the stock chassis. It doubles up as the fuel tank, holding 8 litres. The very V-Max-ish scoops in the frame look fantastic, as does the minimalistic seat. You might think that since there’s nothing on the bike, it’ll be as light as a... er, bullet. But the fact is, it weighs as much as the stock bike! The frame is where the weight lies.

The 3C uses two Yamaha FZ components – the monoshock and the tail lamp – to good effect. One of my favourite things on this motorcycle is that superbly shaped exhaust, which is definitely the best sounding Bullet exhaust I’ve ever heard. Not too loud and tinny, but deep, with the right amount of bass. I suspect it’s the UCE engine at work here, besides the shape of the exhaust itself.

The moment I saw the 3C, my wrists were lodging protests with zestful support from my arms. But it wasn’t all that bad, at least once I got up to speed. During slow-speed U-turn manoeuvres, my wrists did shout ‘I told you so!’ but this is not a road test of a humdrum commuter, is it?! On the move, it feels fantastic. It’s like riding a bicycle that nestles a thumper in its frame. The riding position is a bit hardcore, but it it helps handling no end. Since there’s nowhere to wedge yourself in and nothing to grip with your knees, you do need to hang on to the ’bars.

However, the rear tyre is a bit too wide, so the rear half of the bike doesn’t feel as quick to turn as the front half. Also, the wiring could be hidden away better, but Javeen was working on a tight deadline and couldn’t manage that. Nonetheless, the 3C is great fun to ride, thanks to the riding position and the terrific sound. And of course, it attracts attention like no other Bullet. And doing so at Rider Mania, where there’s no lack of modded machines, is really something. What would it cost you to own a 3C? Well, almost Rs 2 lakh, plus a donor bike and about 40 days to build it. Worth it? Well, you’ll have to answer that question for yourself. However, what the 3C showcases is the dedicated madness of Bulleteers. And about that, there is no question!  If you want your Bullet to get some TL3C, get in touch with Javeen Mathew at javeenmathew@gmail.com