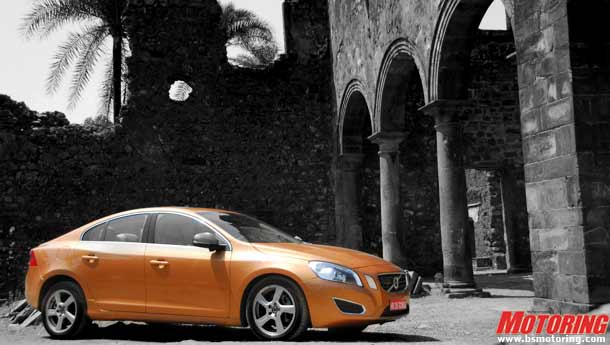 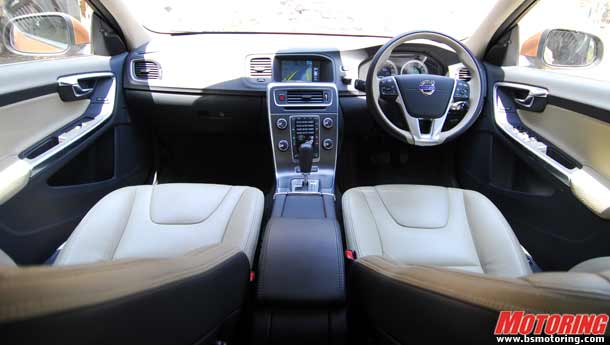 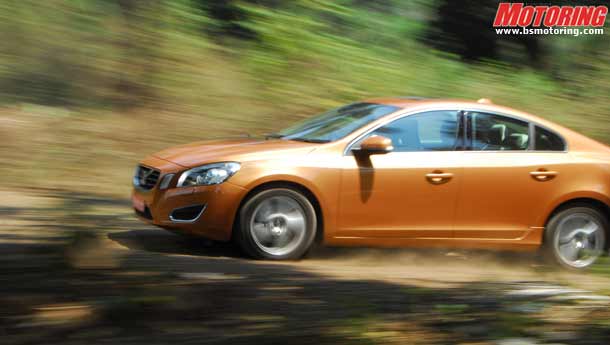 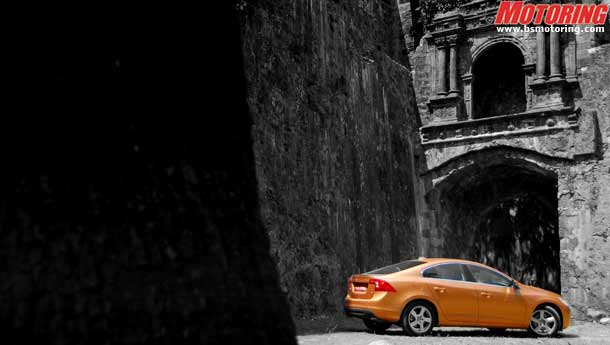 The gearshifts were a fraction slower on the uptake. A fly in the ointment, but what an ointment! Before we knew it, the speedo had crossed 140 kmph and was climbing... fast! Both turbochargers were spinning furiously, whipping up enough excitement in the 93 cubic-foot cabin, the artificial horizon in this case being where the road starts to curve in on us rather quickly. At this moment, I could tell you that the imaginary six-cylinder BMW 330i is about a car-length behind us and the imaginary Audi A4 3.2 quattro is another car-length behind the Bavarian. And yes, to break the suspense, it is the new Volvo S60 T6 that is causing all the flutter. Safe can be scintillating, they say.

Volvo has positioned its new S60 as “naughty”. It sounded funny at first, but what sounded funnier was the name given to the trim — “Summum”. Imagination ran riot as we wondered whether this was Volvo’s way of sending the Summum-ons to its competition, or if it had something to do with wailing babies and their missing milk bottles. Of course, the competition will be worried, if not crying. At Rs 34 lakh, the T6 is some way lower than the competition on price, but it’s the D5 diesel starting at Rs 27 lakh — out-pricing the four-cylinder diesel options from the German three — that should make things exciting in the coming months. But right now, it’s up to the T6 and how it makes that curve coming up.

See how the Volvo S60 stacks up against the Audi A4 and the BMW 330i on the last page!

Shedding some speed, but still keeping the needle as close to three digits as possible, the S60 wiggled its tail a bit, sharpened its claws and just held its line. “Phenomenal,” I said to myself, because unlike the bigger S80 that sets itself into a bit of understeer, the S60 simply uses its four-wheel drive to the max and just doesn’t let go of the intended line. This tells you that Volvo has worked really hard to close the gap on the likes of Audi’s quattro system that has become the de-facto benchmark for all-wheel drive cars. The new Haldex unit uses torque vectoring, essentially a system that utilises the brake on the inner front wheel to kill understeer. But importantly, this hyper-responsive system can send up to 95 per cent of the torque to the front or a large portion of that to the rear. What you get is a car that has tenacious grip levels, fantastic roadholding and a degree of sportiness not seen on a Volvo till date. Surely, it isn’t as sporty as the BMW 3 Series, but it can vie for a driver’s attention for sure.

All through the sets of corners that followed, the car felt enthusiastic enough to be hustled around. Importantly, Volvo has even addressed the steering that weighs up very nicely and adds to the surefootedness, whether you’ve selected Sport or Advanced on the C-Chassis system. Not that you will be too impressed by the steering feedback if you like your BMWs, but it’s a trade-off worth living with, considering it is light to use when moving in and out of parking spaces.

Then again, the S60 T6 has a level of performance its competition would surely envy. Under the hood is a transversely placed inline-six twin-turbo 3000cc petrol (one of a kind in its segment!) linked to a six-speed auto. Volvo says the new engine produces nearly as much power as its 4.4-litre V8 (300 bhp vs the V8’s 315 bhp) but produces its peak torque of 44.5 kgm from a low 2100 rpm versus the V8’s 3950 rpm. That reflects on the timing sheets. The standing start to 60 kmph came up in a blistering 3.3 seconds and exactly four seconds later, the century mark was chewed on and spat out. It makes the S60 quicker by two-tenths to 100 kmph than the 330i and nearly a second quicker than the A4 3.2 V6.

Sure, the Volvo has some more horses under the hood that gets it so much attention, but it’s also quite driveable. Out on the open stretches, the turbos kicked in quite unobtrusively and the selection of gear ratios mask the turbo lag well. Around town, there is some turbo lag to be dealt with, but a downshift is enough to handle that. Speaking of downshifts, I would have liked Volvo to have at least offered paddle-shifters as an option. It allows you a degree of car control when attacking corners fast, and lets you upshift around corners if necessary without necessitating that momentary removal of the hand from the steering that causes it to twitch ever so slightly.

But I can’t complain about the levels of fit and finish and the materials used for the interior. High quality and finely stitched leather apart, the material used even for the steering makes holding on to it a pleasurable experience. Volvo has offered the same set of optional features as the XC60 for India, including BLIS, lane departure warning, adaptive cruise control with braking as well as the whole City Safety package, a raft of airbags and a clever ABS system as standard. The audio unit on our test car sounded great, but it took me some time to get used to the audio controls, which are too simple in these days of complicated multimedia interfaces found on rival cars. There is not much to complain about in terms of space and even out on bad roads, the ride quality feels supple enough even in Sport mode, with a marginal drop in the Advanced mode.

But you could say the best is left for the last, and yes, the S60 is easily the best-looking car in its class. In this copper shade, the S60 simply turns heads like no other and its coupe-like roofline, aggressive haunches and stylistically treated cornering headlamps and bonnet just make this Swede as desirable as a hot chocolate on a cold evening. Despite holding on to its safety flag, Volvo has managed to inject sensuousness in what was an otherwise bland car, as its predecessor exemplified.

Yet it seems Volvo isn’t troubled by being called boring. Or slow. It has only seven dealerships for now (another five are coming up in the next year or so) and sold just 130 cars during the whole of last year, but these are tags they are ready to let go of and the S60 may just help them do that. And if it wants to do that even quicker, it could very well offer the aggressive S60R to us performance-hungry, upwardly mobile Indians, eh?

The other one with an all-wheel drive setup, the A4 quattro was the first of the mass production Audis to get LED daytime running lamps. This rather smart looking Audi’s 3.2-litre V6 gets the car from 0-100 kmph in 8.2 seconds. Push harder and the car will take you to a top speed restricted to 250 kmph. The A4’s key highlights include its leech-like grip around corners and good interior space. Like the C-Chassis system on the Volvo, Audi has its Drive Select system that allows you to shift between comfort and sport oriented set-ups that alter throttle and steering feedback. The steering isn’t very engaging, but until the arrival of the S60, it was the best all-round six-cylinder petrol executive car in the market.

Arguably the sportiest and the most engaging of them all, the BMW 330i is for the type of person who simply enjoys driving. With a cracker of a straight-six under the hood and the most feelsome steering of the lot, this flickable set of wheels is best enjoyed when blasting around a hill or setting the track ablaze. On the highway, the 3 Series demands your absolute attention and that can be exhausting for some. The lack of good rear legroom is another deterrent too, making it a poor chauffeur-driven car. Build quality is close to faultless, while equipment levels can’t be called sparse either. Just a shade higher than the S60 on the price front, the 330i isn’t too bad on the value front either. A new, larger 3 Series is expected next year and we hope it will be just as involving to drive as the current generation.