The KTM 390 Duke will get an update in 2017. The new KTM model has been spied at Bajaj Auto's Chakan plant and images of the same have been leaked on Facebook. The 2017 KTM 390 Duke is expected to be launched by the end of the year. 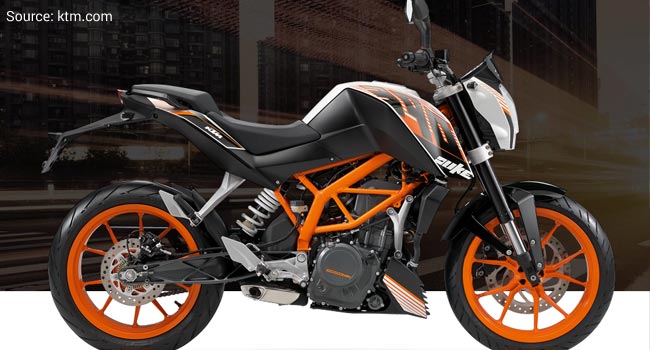 And from the picture it is clear that the 2017 KTM 390 Duke has undergone major cosmetic updates. The image reveals that it is featuring the KTM 1290 SuperDuke styling with the latest split headlight cluster with LED inserts.

The headlight unit has been redesigned with a much sharper and petite unit with a slit to separate the multi-beam headlamp. The fuel tank also has been redesigned while the tank extensions are longer and overlap the USD forks. The switchgear has also been changed and seems to be the all-digital instrument console which we feel will be based on the new 690 Duke's unit.

The frame of the bike has also been redesigned while the rear section is smaller in comparison to the existing model with integrated taillight unit which was seen in the test mule. Also, instead of the underbelly exhaust, the 2017 KTM 390 Duke will feature a conventional exhaust muffler as seen on the updated RC 390 that was showcased at 2016 EICMA motorcycle show.

The exhaust system will be sporting similar to the European version which includes aluminium exhaust and Ride-by-Wire norms. KTM 390 Duke 2017 motorcycle is powered with 375cc single cylinder engine, which develops a 43 bhp power. This is the current engine specifications which are expected to be increased in the 2017 KTM 390 Duke. The Stringent Euro-4 norms will be the engine compilation.