The year 2016 has commenced on a good note as auto manufacturers have launched some of their much-awaited products in India; and BMW has added to the loaded bandwagon yet again. Continuing its launch streak this year, BMW India has released the 2016 Mini Cooper Convertible in the market today. The new version has been launched at the base price of Rs. 34.9 lakhs (ex-showroom). The car will be brought into the country through CBU (Completely Built Unit) and will be placed against the Volkswagen Beetle and the Mercedes Benz A Class in the performance-cum-luxury hatch category.

The 2016 Cooper Convertible is built on the new UKL platform that has spruced up the aesthetics and dimensions of the car. The vehicle is now 3,821mm in length, 1,727mm in width and 1,415mm in height, while the wheelbase has been stretched by 28mm compared to the previous version. The car’s unique selling point is, of course, the soft-top roof that is electronically controlled and can be open and shut up in mere 18 seconds, at the speed up to 30kmph. For the first time, the convertible will be offered in optional MINI Yours version sporting a uniquely woven Union Jack graphic. 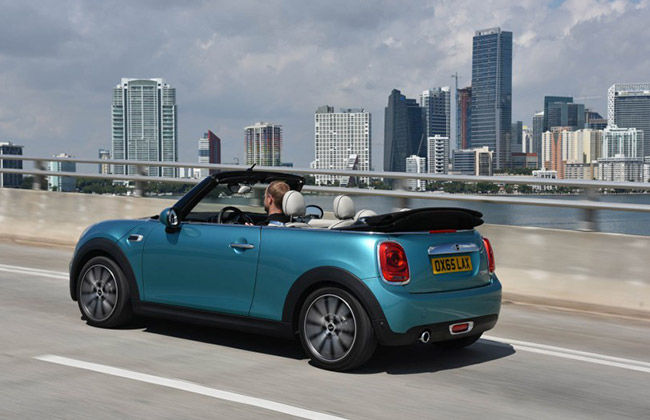 The 3-door convertible hatch will carry forward the traditional design elements. The car sports signature circular headlamps with daytime running LEDs, chrome outlining on grille, sporty alloy wheels, and chrome treatment on the tail lamps as well. The interiors have their own charm, with the cabin adorned with a combination of fabric and leather, a 6.5-inch touchscreen infotainment, reverse parking, and a lot of passenger comfort features. Not to forget, a new safety feature besides the regular ones is the inclusion of rollover protection system, a kind of safety cage that deploys automatically in case of a rollover. For more comfort, the company is offering MINI Excitement Package featuring LED interior and ambient lightning as well as the projection of the MINI logo at the bottom of driver's side when the door is opened.

The 2016 Mini Cooper Convertible is a must for fun-loving, wallet-heavy drivers who want to flaunt a powerful hatchback with the provision of a drop-top. Going by the above statement, the new avatar is powered by 2-litre 4-cylinder mill with Twin-Turbo technology, producing 192bhp and peak torque of 280Nm. The engine come paired with 6-speed sports automatic transmission with paddle shifters. The proficient combination enables the car to go from 0-100kmph in just 7.1 seconds, reaching the top speed of 233kmph.

The company is also expected to launch the next-generation MINI Countryman which was recently spied in China. The launch will happen sometime in 2016.