Volkswagen is also expected to launch this SUV in India in the coming years!!

Volkswagen have announced that they will be showcasing their new Tiguan at the Frankfurt IAA which will be open from 17 to 27 September. Tiguan will be available in 3 versions which are the sporty Tiguan R-Line, the classic on-road model and an off-road version. A concept plug-in hybrid variant will also be showcased, called the Tiguan GTE which has 160kW/218PS of system power.

There are 8 different engines employed in the new Tiguan with power outputs ranging between 85 kW / 115 PS and 176 kW / 240 PS. Although there are no official figures for the fuel economy, the Germans claim their new and more powerful Tiguan is up to 24 per cent more fuel-efficient than the previous models. An all new 4MOTION Active Control 4-wheel drive system is being used in the SUV which makes it easier to adapt to all types of driving conditions. The SUV features front assist with city emergency braking and pedestrian monitoring, lane assist and the automatic post-collision braking system, all as standard. Also, this is the first Volkswagen SUV to be based on the MQB (modular transverse matrix) platform which means the Tiguan is engineered to tow a load upto 2,500 kg, quite useful for the caravan families. 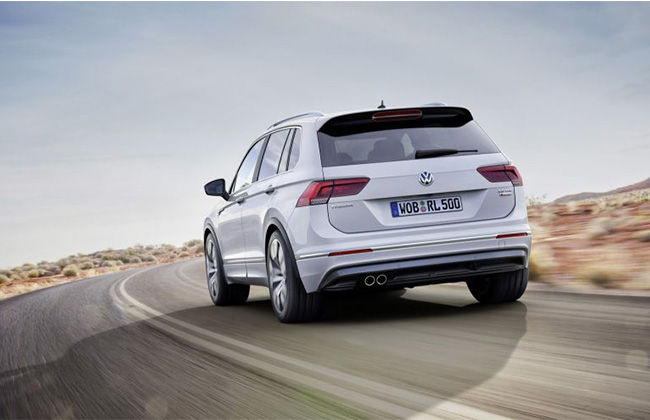 The new version of the Tiguan is over 50 kg lighter than the previous model. Which means you can now carry more luggage which is possible in the 615 litres boot which can be further extended to 1,655 litres with the rear seats folded. This is a gain of 145 litres from the previous model. The Tiguan also features online assistance like automatic accident notification, online traffic and parking space info and vehicle status report. The car can be connected with both, android and apple smartphones and tablets via the App Connect and Media Control App which makes it convenient for the user to operate in phone functions while driving.