The auto manufacturers are keeping an eagle eye on the upcoming union budget. The maiden budget of the BJP led NDA government will also be the first major economic stance. Just earlier this year, the auto industry got the sigh of relief when excise duty cuts were announced. The same tax relief was supposed to come to an end this month. While the budget is being under preparation, honorable finance minister Mr. Arun Jaitley has announced to extend the excise tax cut period to next six months. Now, the date of revision is extended till December 31st 2014. The excise duty was basically brought down on the small cars, commercial vehicles and two-wheelers 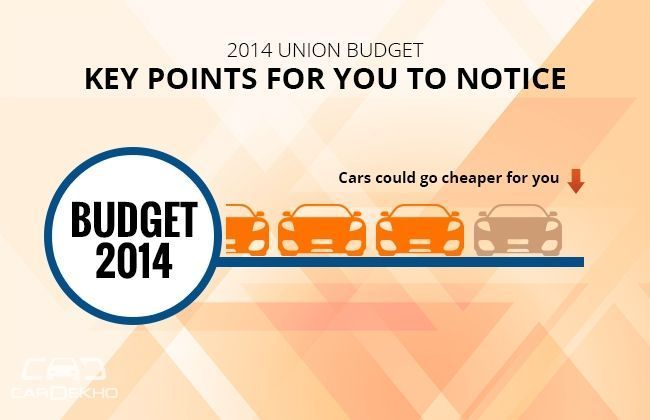 Modi government is really swept up by the upcoming event and is likely to bring some sops for the automobile industry and for the consumer as well.

. Tax reliefs on the growing depreciation allowance on the passengers cars upto 33 percent throughout different segments.

. Reduction of gross borrowing for this year fairly reducing the stress on availability of finance for the private sector.

. Implementation of GST (Goods and Service Tax) which was long pending. It would certainly take the industry on the fast-track growth.

. Framing of vehicle terminal policy in the interest of clean environment, better flow of traffic and road safety.

Besides this, Modi government could also pay heed to the request submitted in the pre-budget memorandum by the Society of Indian Automobile Manufacturers (SIAM) to retain the existing tax cuts. It requested the government to reduce excise duty to flat 24 percent on all vehicles excluding the small passenger cars. FADA (Federation of Automobile Dealer Association) reached a step further and demanded to reduce excise duty to 12 percent on all the vehicles irrespective of their engine and size.

If we see the official figures, automobile sector play an important role in the manufacturing GDP of the country. The auto industry contributes about one-fourth of the total manufacturing GDP generating approximately 18 percent of gross excise revenue which is very crucial. So looking at the stats, it is highly expected that the financial department would be pondering seriously for the benefit of the industry which is stagnant for past two years. Furthermore, the weak monsoon could play spoilsport for the sector as there will be less involvement of the rural areas, eventually affecting the overall sales chart.

A recent survey by Frost & Sullivan, the global growth consulting firm who also provides strategy consulting and market research & analysis, revealed that negative customer sentiments and uncertain future growth has created difficult business environment not only for auto manufacturers but also for the dealers across the country. According to FADA, auto retail trade and service industry covers a vast network of 9,500 which include auto dealers and their service stations involved in sales, service and repair of the vehicles across various segments. So it is a vital link between the automotive business and the stakeholders that need to be taken care of.

Moreover, the automobile industry provides direct employment to more than 7 lakhs people in the country and contributes about 70,000 crores in the form of different taxes. Altogether if we analyze, the industry feeds about 19.5 million people in India from direct and indirect sources. The record slowdown in the industry is due to lack of proper demand, high interest rates, weak response from the export markets and ever increasing fuel prices that affects consumer budget as a whole.

The finance minister Arun Jaitley already gave the pre-budget booster to the industry by extending the excise cut period. In a recent statement, Prime Minister Narendra Modi pledged to take harsh steps to restore the plunging economy as the blunt message ‘acche din aane wale hain’ and the victory of the BJP raised hopes inside people for an economic overhaul. Manufacturing will certainly play a major role in endeavors of the new government to attain higher economic growth. Let’s hope the upcoming budget could create a better road-map for the implementation of given policies which will in turn benefit both the reeling auto industry as well as the struggling common man of this country.