Audi has revealed A7 h-tron concept at the on-going LA Motor Show, Sportback looks identical to the facelifted A7 but extracts just few drops of water from the exhaust! The ‘h’ in the name denotes ‘Hydrogen’, apart from the ‘h-tron’ badge its hard to guess between the standard A7 and fuel-cell driven A7. 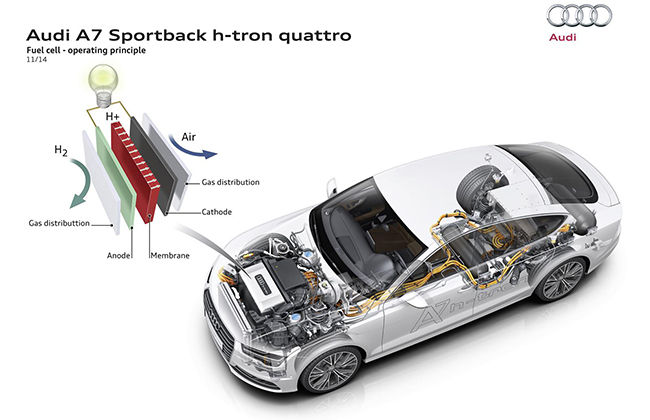 The heart and soul of this A7 h-tron concept are two electric motor placed at front and rear axles; there is no mechanical connection between the two and drives both the axles independently - powering all the four wheels - Audi Quattro drive. The combined output of the vehicle is 228 bhp with a max torque of 540 Nm. Audi says, output can be increased if the voltage is beefed-up! The set-up hums hard propelling the 1,950 kilogram A7 h-tron concept from standstill to 100km/h in 7.9 seconds and sports a top whack of 180km/h. The fuel cell provides electric energy to both the motors.       This is how the fuel cell works? 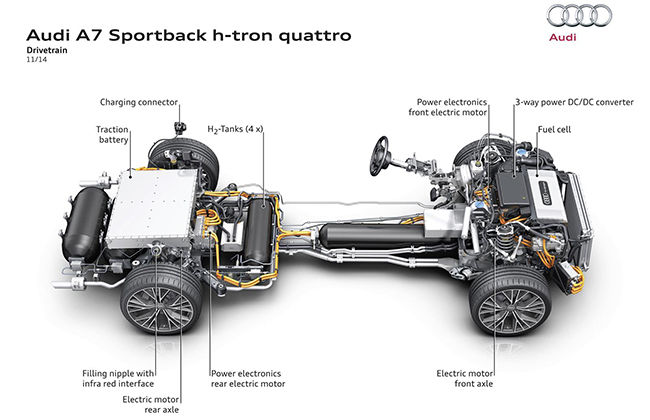 The fuel cell in the A7 is settled in place of the conventional motor, the fuel cell comprises in excess of 300 individual cells forming a stack. Speaking of each individual cells, the core of a cell is made up of polymer membrane and there’s a platinum-based catalyst on both the side of this membrane. 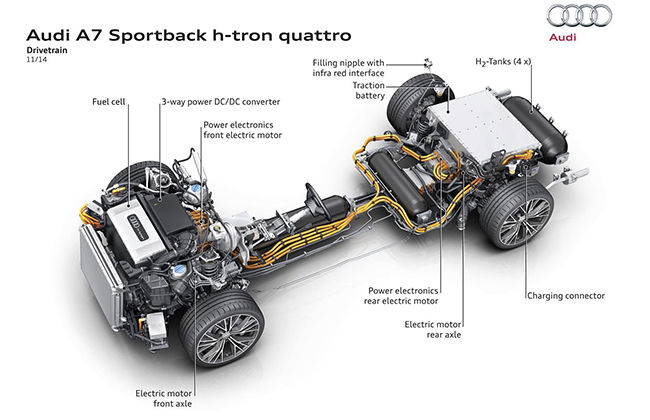 Hydrogen from the tank is supplied to the anode (positively charged electrode), then it is broken into electrons and protons (positively charged electrons). The separated electrons supply the electric power, an individual cell provides voltage in between 0.6-0.8 volts. Meanwhile, the protons rush towards the cathode to react with air (oxygen) to form water vapour; voila that’s what it breathe out from its plastic (to save overall weight) exhaust! 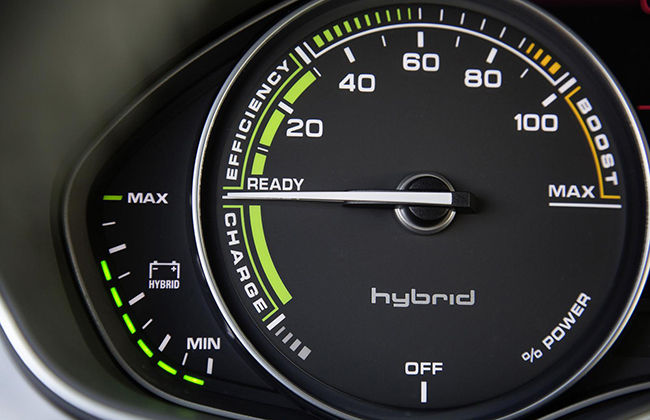 There’s also a turbocharger which forces air into the fuel cell while a fan forces the unused hydrogen back to the anode. The fuel cell works in the voltage range in-between 230-360 volts. Turbocharger, fan and along with the coolant pump use the electricity from the fuel cell. 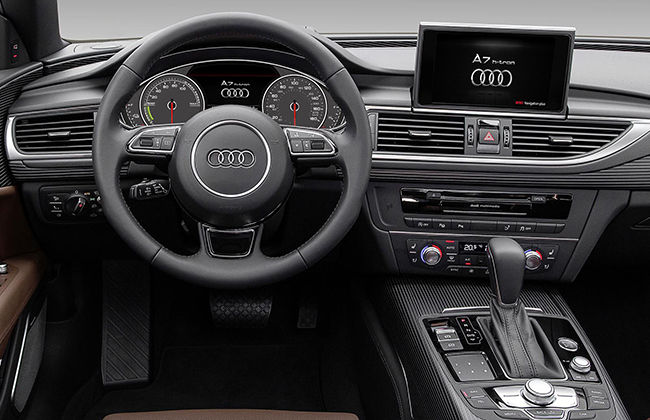 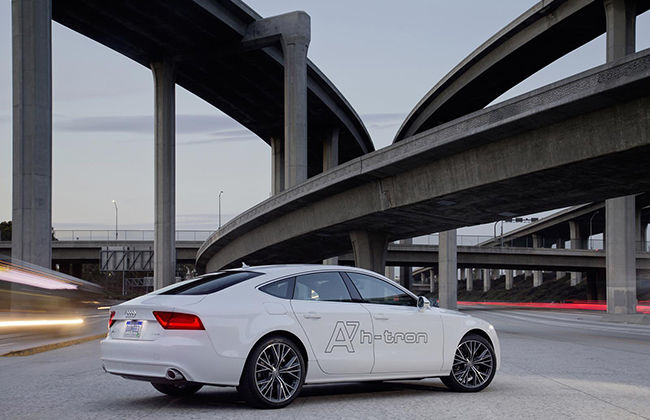 Explaining about the new Audi A7 Sportback, Prof. Dr. Ulrich Hackenberg, Member of the Board of Management for Technical Development at Audi said, “The A7 Sportback h-tron quattro is a genuine Audi – at once sporty and efficient. Conceived as an e-quattro, its two electric motors drive all four wheels.” 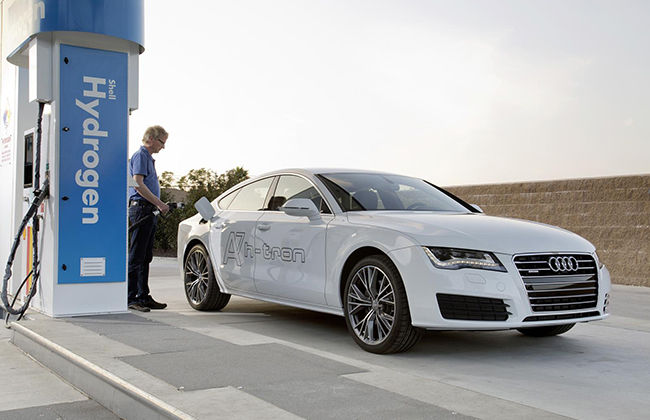 “The h tron concept car shows that we have also mastered fuel cell technology. We are in a position to launch the production process as soon as the market and infrastructure are ready,” he added further. 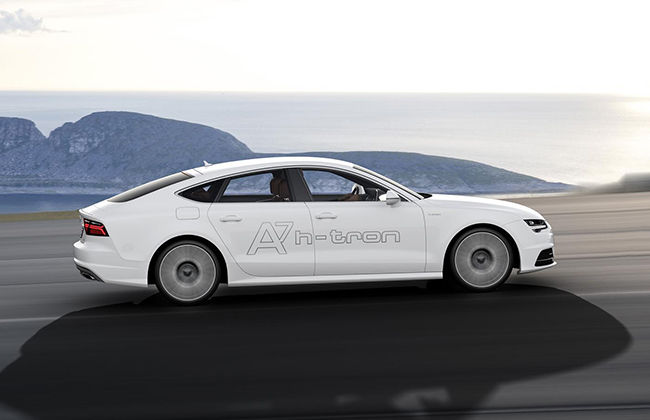 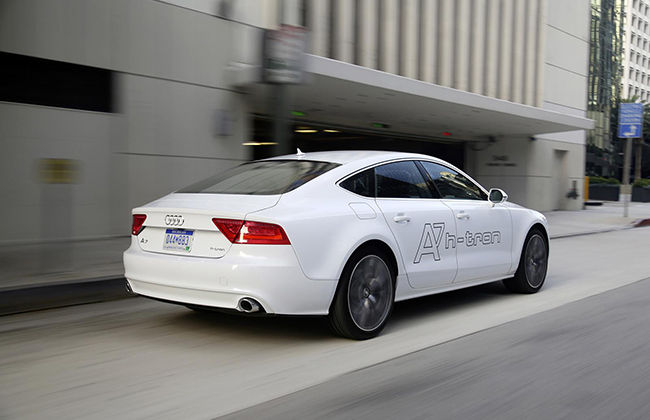