Unveiled for the first time at the 2014 Auto Expo, the facelifted Ford Fiesta is all set to hit the Indian roads by the mid of this month. Based on the same platform as the current model, the car now carries various changes inside-out. The most easily noticeable and prominent transition comes in the form of a completely revamped front fascia. Which includes large and bold chrome garnished Aston Martin-inspired front grille with a redesigned bonnet, new bumper and angular headlamps. While the rear carries more subtle changes in comparison, it comes with redesigned tail lamps, better-looking boot-lid, tweaked bumper with chrome touchups and black cladding at the bottom. On the inside, the grey-black color theme with the same sort of dash and blue lightning, the car some-how flashes the EcoSport feel, which is a bit disappointing for a car of this segment. 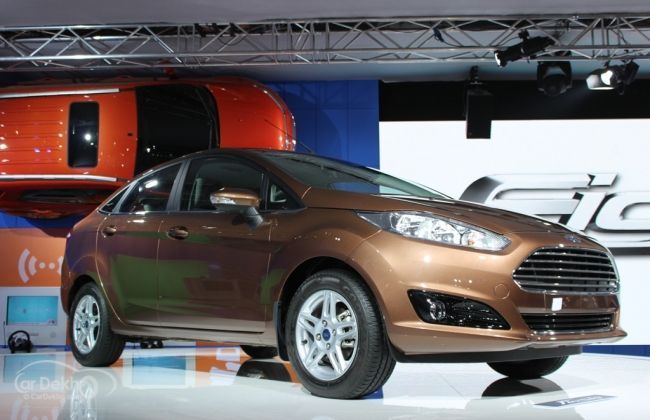 In terms of engine options, a 90bhp TDCi diesel motor will be the only offering with the new Fiesta. In past few years, the gap between the diesel-petrol car sales has widened rapidly, especially in the segment where the Fiesta stands, the petrol buyers are almost negligible. Although, there are some hopes for the arrival of the Ford's well-known 123bhp-1.0-litre EcoBoost unit (which made its Indian debut with the Ecosport) by the year end. Other than that, the facelift seems to be mechanically identical to the current Fiesta, with the dimensions, wheel-base, tyres and capacities remaining the same. Unlike the usual list of trim levels for its cars, this time Ford has kept Fiesta's variant no. to just three - Ambiente, Trend and Titanium. The base Ambiente trim offers almost nothing on the gadgetry front- not even a music system, all thanks to company's urge to keep pricing aggressive. While the mid and upper variant comes with an auto climate control, steering-mounted controls, cruise control and footwell lamps and SYNC on-board computer. On the safety front, Anti-lock Braking System (ABS) and Electronic Brake Distribution (EBD) will be offered as standard with all the variants. However, the base will only get the passenger airbag. Despite of being a capable player in its arena, the on-going Fiesta wasn't able to clock big numbers for Ford due to its higher pricing. Keeping all that in mind, we expect a better priced and well-marketed product this time. Final words on the pricing is yet to come, but we expect that Ford will keep the pricing competitive and will lie somewhere around Rs 8 lakhs. After its arrival, the car will stand against the likes of Volkswagen Vento, Fiat Linea and Skoda Rapid. Stay tuned to Cardekho for more updates and detailed review of the 2014 Fiesta, as we'll be driving it soon!