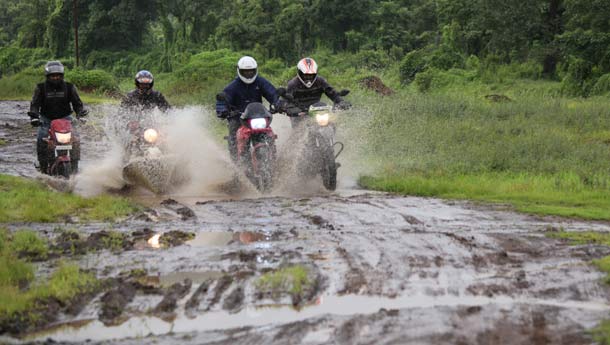 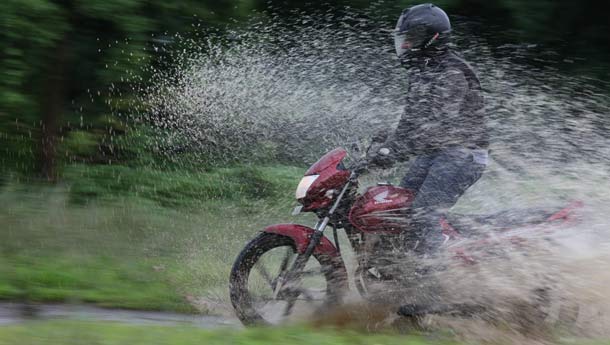 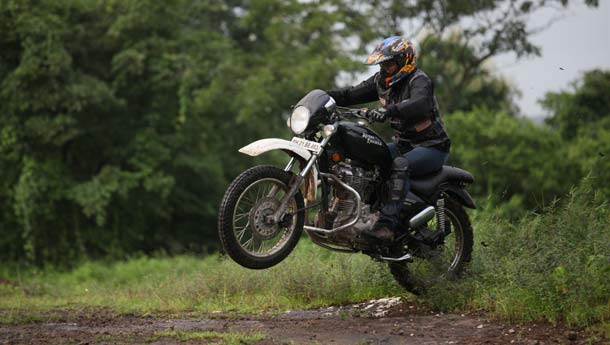 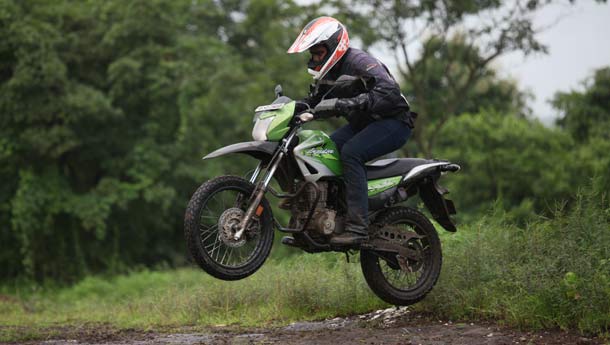 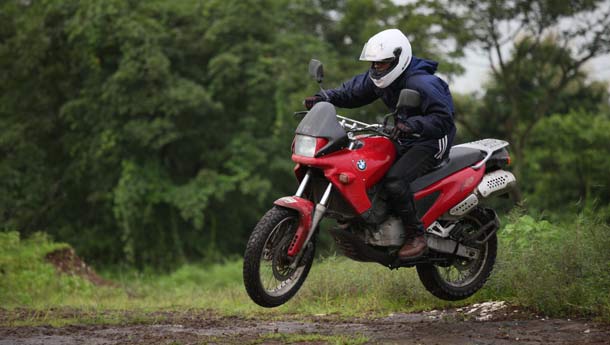 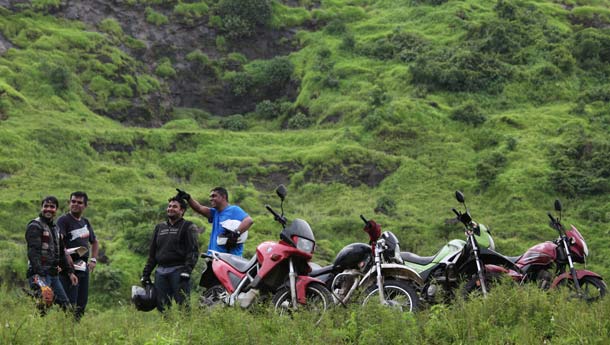 Hello, and welcome to BSM's motorcycle Slush Fest! Yes, it's that time of the year, when we take a bunch of motorcycles, ranging from 'intimidating' to 'downright stupid', off civilised environs and proceed to make complete fools of ourselves. It's not all fun and games, though. The Slush Fest is, and it always has been, an extreme test for both motorcycle and rider. Room for error is not all that much and the fear of a hilarious spill making its way into the pages of a national monthly grips one and all.

Joining us this year are two of our long-termers, the Honda Dream Yuga and the Hero MotoCorp Impulse, both not premium motorcycles in any way in the Indian market, and both very impressive off the road! To fill in the ‘quirky’ slot, we brought along a Royal Enfield Thunderbird Twinspark, complete with knobblies and the works. And lastly, completing the picture is the BMW F650 Funduro, a motorcycle that was once sold in the country, and one that never fails to impress. In the next pages, you will witness these motorcycles and their riders in compromising positions. Viewer discretion is advised.

The quietest, puniest motorcycle of the bunch was also one of the liveliest! It played along to whatever we threw at it effortlessly and despite being on slicks (road tyres are the worst things you can bring along to an off-road event, apart from snakes, stale pizza and your grandmother, of course), it simply chugged along, propelling Aneesh to the (many) highs and (few) lows of off-road riding with ease. The Honda Dream Yuga was the underdog of our Slush Fest, and it impressed!

The Dream Yuga is no off-roader – it’s a small, comfy and economical everyday commuter. Period. And it’s this minimalism that worked in its favour. Since it weighs only about 100 kg, you can simply lift the entire motorcycle from the handlebars and land the front-end back in whichever direction you want to head in. The soft suspension absorbs the likes of rocky patches and deep craters with not much complaint, and while the brakes weren’t exactly a dream, this was not an issue, since it wasn’t going fast enough anyway!

In water? This bike almost went under it! The underdog of the Slush Fest took to our little dive into the stream with indifference. No drama, no ‘big moments’ – the Dream Yuga is a natural, although it’s only obvious that you need to watch out for that horizontal exhaust, which is like an open invitation to water (God save you if you get off the gas!). Despite going in nearly tank-deep, the Dream Yuga came out unscathed. Full points for being so potent, but we wish it was a bit more dramatic!

Barely a month old, this T’Bird has gone under the knife quite early in life. The ape hangers were tossed, so was the front fender and last to go were the tyres. In came a motocross-style front fender, a wide, street-spec handlebar and knobblies that make life on tarmac quite hard. Because we’re lazy, only the owner of this machine piloted this beast on our course for the day. That, and our man simply refused to dismount the quirky addition to our line-up.

Brit bikes with knobblies always make for excellent dirt-trackers, but jumping them off nature-aided ramps is something I thought only existed in Steve McQueen’s horizons. I was wrong and how! The T’Bird was definitely wearing the most serious set of rubber in the group (except for the Beemer, that is) and it was unstoppable no matter what came in its path. Everybody makes way for a Bullet? Quite right! Of course, it isn’t exactly a natural in such conditions, and with carelessness you will land up on the wrong side of the bike faster than you will go from 0-60 kph.

It’s the T’Bird that ‘discovered’ that infamous pit in the middle of the stream. One moment, it was level with the horizon, and the other, it had nose-dived into what must have felt like an endless pit for its rider. But all that torque paired with those excellent tyres meant the T’Bird simply sprang up through to the other side of the pit in an instant! By the end of the day, the T’Bird went through the same stretch of the stream about three thousand times before we had to suck the water out of the stream just to get our man to stop!

I’ve been waiting for this day right from the moment I first got hold of my Impulse long-termer. Its off-road prowess you already know of, if you’ve read our road test, but wet conditions give even the most serious off-roader a hard time. And this one’s only a Honda Unicorn on stilts. You know what? I’ve always considered buying the Impulse, and now I’ve made up my mind. If Hero doesn’t part with its long-termer in due time, mine’s going to be a red one with pseudo sponsorship decals...

Long-travel forks, semi on/off-road tyres (19" front, 17" rear), a long seat so you can move back and forth motocross style, a disc up-front, dirt-friendly pedals and good ground clearance – you cannot ask for more on what is essentially a 150cc Indian motorcycle priced not at a premium. The Impulse takes to slush, rocks and water like a natural and played the role of a recce motorcycle with enthusiasm. Harder suspension would have made it more fun, and would have spectacularly made up for the lack of outright horsepower. Overall, the Impulse delivered what it promised and it’s especially friendly if you’re new to the dirty world of off-roading. It’s so good, in fact, that the only time I let go of the Impulse was when Dan, an old friend and F650 owner, wanted to switch places.

Thanks to its tall stance and that upswept exhaust, the Impulse did not disappoint. It did the water drill with complete confidence and full communication. This is how the Impulse is different from every other bike in this test. Even, say, the Dream Yuga went through the water crossing bit without trouble, but dependability is one thing and trust is another. With the Impulse under two feet of water, I was already thinking of the yump that awaited at the end of the stream, rather than ‘Oh, I hope I get out of here quickly enough'.

- Tyres could have been better,  upgrades are hard to find

When I was new to the world of off-road riding, back in college, Dan loaned me the F650 for a dash across a trail I still frequent, a favour I repaid by promptly dropping the bike at the end of a decreasing-radius donut. The F650 was never made with the intention of scorching motocross tracks. It is a long-legged, rugged motorcycle that can also tame bad roads. Persist and it will delight, although if you’re caught napping, the thing takes no time in showing you the world from an extremely undesirable low-angle perspective.

Because my idea of exercise is limited to the quantity of chocolate frappes I consume in a day, riding the BMW F650 off the road took some effort. The weakest link in the F650’s structure was the front tyre – it simply wanted to give way! Continuously making steering adjustments while trying to manipulate all of those 70 horses is a muscle-wrecker alright! Try riding an elephant on a motocross track while trying to eat fried rice with chopsticks, and you’ll know what I’m talking about. Still, in skilled hands, the F650 is simply brilliant. Now, if only BMW Motorrad could loan me that new F650 on a long-term basis...

Off the road, size matters, and so does bulk. In this case, both worked completely in favour of the F650, since it nearly splashed all the water out of the stream. The best part is, we could have strapped sixty litres of luggage onto the bike and it would have done it with the same ease. That trusty BMW motor was never a cause for worry and if there is one word to describe this motorcycle, it’s ‘bulletproof'.

PABLO was mighty pleased, having shot thousands of frames of highly (un)skilled riding. He did so with his usual panache, while delivering supremely colourful one-liners that had everyone in splits. Even the cattle.

KYLE showed up with a fever and was, hence, off the saddle. As a result, everyone rode extra hard around him, just so he could feel worse. We’re like this only. He had his share of fun in the Tata Nano, however!

ANEESH surprised everyone (including himself) astride the Honda Dream Yuga, a motorcycle he’s now a fan of. Good, so we’re taking that CBR 150R long-termer off you, okay?

RUMAN was the only one in the entire day to have had a spill. Serves his motocross-mouth right! Ever willing to do the impossible, he’s contemplating riding his own KTM Duke for next year’s Slush Fest. Should be funny.

YUSUF is a member of the Mocha Bikers Association (M.B.A, popularly) and turned up with a tricked-out, brand new, Royal Enfield Thunderbird. Where he finds his source of energy, no one knows. The man kept going on and on and on....

DAN brought along his 14-year old bike and his 15-year old son for the shoot. Amazed everyone with his command over his ‘98 BMW F650 and went home with a pillion insistent on adding an Impulse to the garage. We warned you, Dan!

Most elementary to off-road riding is tyre pressure. Drop a few units from the recommended air pressure and you’ll have earned yourself more traction.

Keep your riding posture neutral. Move around in the seat as and when required and make sure your riding gear is well-vented – off-roading saps your energy faster than you can imagine.

Before you attempt a water crossing, walk through it. This way, you can assess the sturdiness of the soil beneath and whether it will take your motorcycle’s weight or not.

Always carry a few basic tools (spanners for the spark plug and the handlebar, for example) when riding off-road. Minor spills can damage the setup of your motorcycle and the last thing you want is doing a 100 km ride home with a loose handlebar.

Avoid venturing into trails all alone – you never know when you might need medical assistance or perhaps a hand with pulling your motorcycle out of a ditch! Plus, you’ll always have someone to have a good laugh at!

1 ...Ride with too much luggage. You need energy to tackle off-road conditions and the last thing you need is a spent shoulder muscle thanks to a lousy backpack.

2 ...Venture into a trail with a mechanically unfit bike. Also, if you’re taking your everyday ride off-roading,  dismount bits of bodywork non-essential to off-road riding.

3 ...Wear riding kit that restricts free body movement. You need to be as flexible as possible when riding off-road – skin tight leather clothing is for the racetrack.

4 ...Ride mindlessly. Most street riders are overwhelmed at the sight of open, green pastures. Watch your step! Riding over someone’s rice crop may not end as heroically as you would have liked.

5 ...Be nervous. As long as you’re well-kitted and have another person to assist you, even a nasty fall can turn into a big laugh. Relax, focus and enjoy kicking up mud!