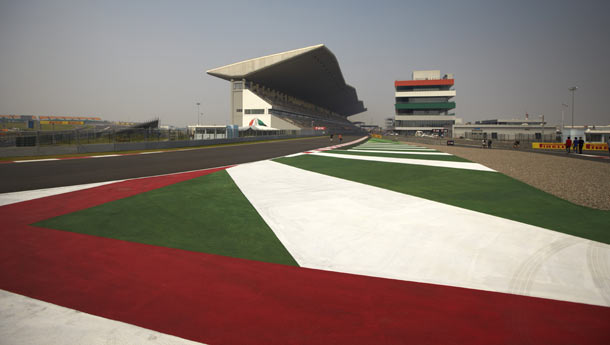 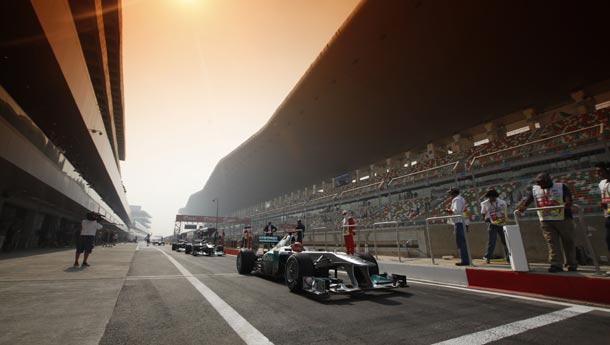 There were plenty of skeptics ahead of the first Indian Grand Prix. People who’d made it to the venue a couple of months before the race were scandalised by what they saw. The track, or what they could see of it, resembled a construction site more than anything else. But the Jaypee Group didn’t break a sweat. They were quietly confident that they’d be able to meet the September 20th deadline for the homologation of the circuit — and when the FIA’s race director, Charlie Whiting made it to to the Buddh International Circuit on that very date, he gave the track his nod of approval. F1 2012 was go!

WAY BACK WHEN
But India’s F1 connection goes back decades. Other than the fact that loyal F1 fans listened to BBC’s radio broadcasts of Formula 1 races, subscribed to magazines that would reach them a couple of months late and ordered friends and family to send them VHS recordings of the races from abroad, India’s F1 connection even included an F1 car being raced right here. That’s right, back in the 1970s when a dusty old airstrip at Barrackpore, near Kolkata, saw some of the country’s hottest racing action, Vijay Mallya brought down an Ensign Formula 1 car and raced it at that very track!

A FANBASE IS CREATED
In order to bring Formula 1 down to India, though, there first needed to be a full-fledged fan following in the country — a whole host of people, instead of the rather niche circle of enthusiasts that existed at the time. And in order for that to happen, people needed a visual connection with the sport — they needed to watch Formula 1. And so, the everyday F1 fan owes a big thank you to current Federation of Motor Sport Clubs of India President Vicky Chandhok. It was Chandhok’s production house which owned the rights to broadcast F1 in India. But in the early 90s, Doordarshan didn’t see the point of broadcasting a sport that it believed was rather obscure. And so, Chandhok’s company paid the country’s national broadcaster to telecast F1. With that single move, Formula 1 caught on in India.

We were able to watch races live — a generation of Indians was introduced to the brilliance of drivers such as Ayrton Senna, Alain Prost and Nigel Mansell. The F1 fan became familiar with tracks such as Spa-Francorchamps, Monza and Monaco. The audience was primed — bringing F1 down to the country was the next logical step.

THE FIRST STEPS
Given that a Formula 1 car was first raced at Calcutta (now Kolkata), it’s no surprise that the Calcutta Motor Sports Club was the first to jump at the opportunity to bring F1 home. Things progressed quickly: a site was located, backers and funding for the project was found. In 1998, things looked very good. Then the Indian Government threw a spanner in the works when they decided to disallow cigarette sponsorship of any sort in sporting events. This meant British American Tobacco pulled out of the venture — and once funding was lost, the project went dead. The next serious effort to bring F1 down to India was made by then Andhra Pradesh Chief Minister Chandrababu Naidu. But those plans went down the drain when he lost the assembly elections and wasn’t in a position of power any longer.

Plans, nonetheless, were afoot. The Indian Olympic Association was busy, and they surprised the country when, in 2007, they announced that they had managed to ink a deal with the FIA to host a race in India in 2010. That didn’t work out though — a delay in sourcing funding meant that the deal expired. After which the Jaypee Group stepped in. The race was postponed from 2010 to 2011, a site was chosen and work began in earnest.

THE TRACK
Hermann Tilke is a name most F1 fans are familiar with. Tilke is the man behind most of the newer Formula 1 circuits — Malaysia, Turkey, Abu Dhabi, Valencia. It was no surprise when the announcement was made that he was in charge of designing the Buddh International Circuit.

The Tilke-designed track, once finished, met with approval from drivers and spectators alike thanks to its challenging layout.

THE GRAND PRIX CIRCUS DESCENDS
When it was time for the race, while Sebastian Vettel did run away at the head of the grid, the circuit managed to throw up some interesting racing further down the order as well, with Felipe Massa and Lewis Hamilton banging wheels. Fans were out in full force, cheering on their favourite drivers, with Michael Schumacher emerging way ahead of the rest. The 2011 Indian GP, despite the fact that it had no bearing on the championship, was a great success.

AND NOW...
With the Indian GP is in its second year, drivers are still looking forward to the challenge of racing here. “After the first sector you have no time to think,” said Ferrari driver Fernando Alonso on the challenges the track throws up.

However, based on learnings from the 2011 edition of the Grand Prix, certain changes have been made to the track. While the layout remains the same, the organisers of the event have managed to solve the problem of dust on the track by planting over one lakh saplings around the circuit, keeping dust at bay, ensuring the drivers have more grip. They have also lengthened the kerbs at Turns 6, 7, 8 and 9, which means drivers have less room for error. The long double-apex complex of Turns 10/11 has gravel on the outside, instead of astroturf, also adding a bit of a challenge for the drivers.

ON THE FLIP-SIDE
It appears, however, that the novelty of the Indian GP has worn off. While there was plenty of excitement and noise at the track last year as far back as the Thursday before the race, this year, the buzz around the F 1 seems a little subdued. The driver’s autograph session didn’t have quite the same feel as it did last year, and the grandstands, come tomorrow, might not be as packed.

FOR THE FUTURE
But there’s no reason to fear for the future of the Indian GP. With the Jaypee Group having signed a contract with the FIA to run the event right up to 2020, there is every chance of exactly that happening. And, while circuits like Turkey and Bahrain have been axed from the F1 calendar, the Indian Grand Prix is likely to stay put simply because the layout of the BIC will ensure exciting racing. And there’s nothing better than that for F1.