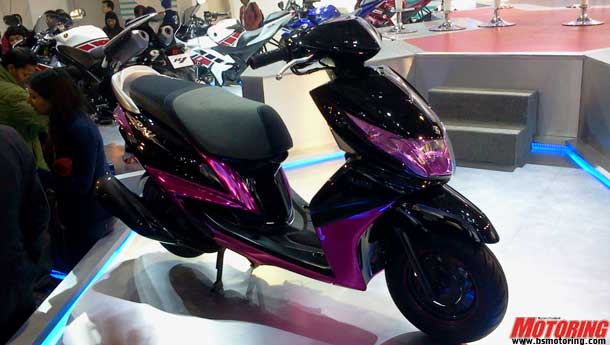 Yamaha has made good its promise of entering the Indian scooter market. The manufacturer displayed its new scooter concept - the Yamaha Ray - at the 2012 Auto Expo. The scooter has been designed with women in mind, and has pink highlights and a rather pleasant stance. Our eyes at the Expo claim the women were gushing over the scooter, but that could also be due to the presence of a certain John Abraham at the show.

Other scooters on display were from the ASEAN market and included the Mio, Fino and Xeon.

Usual suspects like the R1 and VMax were also at the stall. As was a Fiery Red limited edition of the R15, as well as a celebratory 50th anniversary of Yamaha edition R15. Both these limited edition motorcycles are priced at Rs 1.10 lakh, ex-showroom, Delhi.