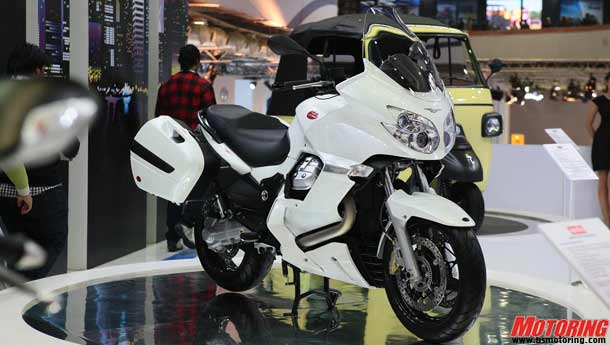 Apart from launching the Vespa brand here, Piaggio also brought with them a couple of Moto Guzzi and Aprilia models to gauge customer reactions.

On display at their stand is the Moto Guzzi Norge touring bike. The original Norge was the first bike to incorporate a swingarm rear suspension and was ridden from the Moto Guzzi factory in Italy to just outside the Arctic circle. Moto Guzzi retraced the same trip on introducing the new one. Now that’s one capable tourer to give some competition to the BMW GS bikes! Moto Guzzi also has in it’s line-up many standards and naked bikes powered by their trademark horizontally placed V-twin engines.

From the Aprilia range there’s nothing on display but models like the Mana, new Touno (based on the RSV4 motor), Dorsoduro and the RSV4 will be making it to our shores. The Mana is a naked motorcycle with menacing looks. Touno and RSV4 share the same V4 engine but are completely different kinds of machines. The Dorsoduro, which is a supermoto style bike is going to lock horms with the Ducati Hypermotard! With a line-up like that, Aprilia looks all set to take on Ducati, the other Italian motorcycling giant that’s already in our market.