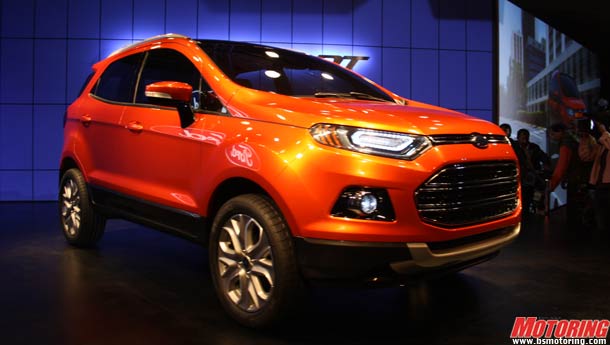 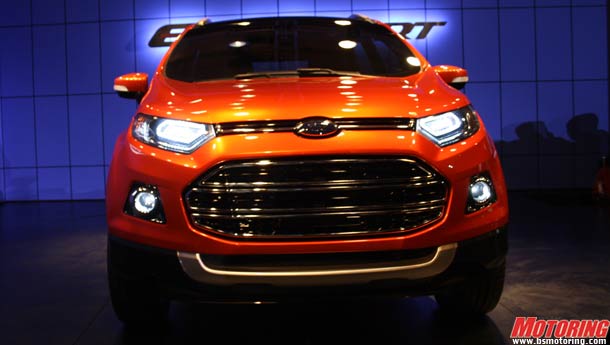 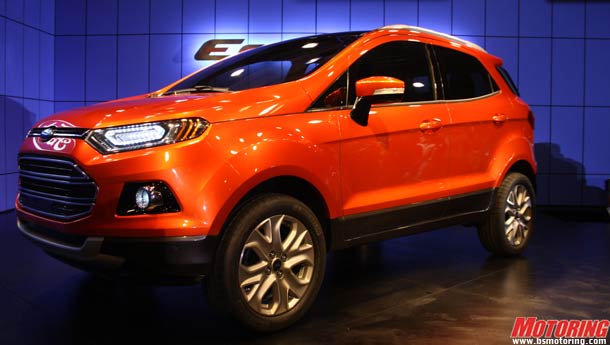 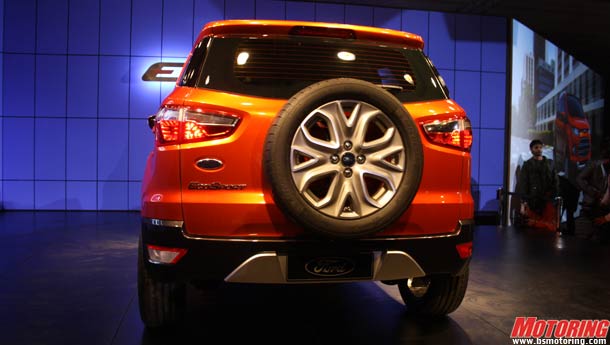 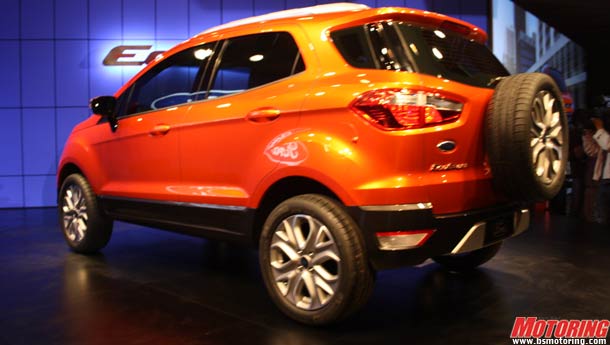 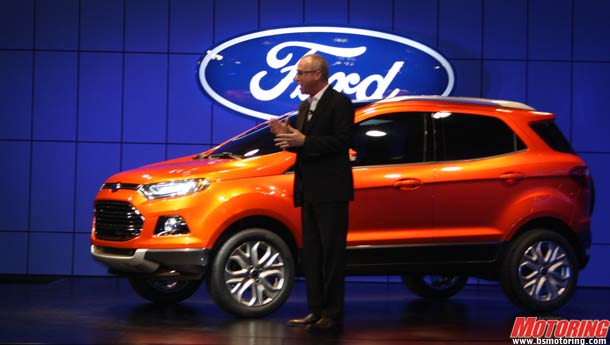 Ford has just unveiled their new compact SUV, the EcoSport at the 2012 Auto Expo. The global unveiling was conducted by J Mays, the design head of Ford worldwide.

At the unveiling Mays declared 'Never have we offered so much on such a small footprint.'


The EcoSport SUV looks like a hopped up Ford Fiesta, natural given the fact that it is based on the Fiesta platform, and is a rather good looking car with smart LED lamps.

The SUV previews the new form of the kinetic design which will be seen in future Fords. The EcoSport also has an all-new engine for fuel efficiency - this is a 1.0-litre, 3-cylinder EcoBoost engine. The engine makes 120 PS of peak power and 170 Nm of peak torque.The EcoBoost is a turbocharged direct-injected engine and India is the first market to get this particular motor.

BSM caught up with design legend J Mays (known for his retro-futuristic designs like the Ford Thunderbird, Volkswagen Beetle and Ford Mustang) at the Auto Expo to find out more about the EcoSport.

'This is the new global design language of Ford, which is the kinetic design that has been refined and cleaned up,' said Mays. 'The kinetic design is now less fussy,' he went on to say. The design style can also be seen on the new Ford Mondeo or the US Ford Fusion, which will be on display at the Detroit Motor Show over the next four days.

Back to the EcoSport - the SUV has flared wheel arches, 17-inch wheels, an inverted trapezoidal grille and a very raked A-pillar. In terms of the headlamps, Mays declared that while those of other cars were getting bigger and bigger, Ford is trying to go smaller with the new design language. This is possible due to the use of LEDs and also the fact that the headlamps are now also positioned lower.

The EcoSport has a rather friendly appearance, unlike traditional SUV designs and Ford has possibly taken the lead over the Renault Duster by unveiling the EcoSport today.

The EcoBoost engine has power equivalent to that of a 1.6-litre, 4-cylinder diesel engine. Because the EcoSport has a small engine which is less than 1.2 litres for the petrol version and 1.5-litres for the diesel engine, combined with the fact that it is less than 4 metres in length, it will be able to avail of excise duty benefits too.

The Ford EcoSport was developed in South America in conjuntion with teams from Asia and North America. It's based on Ford's B-platform which also underpins the Fiesta. Globally, Ford expects the sales of the B-platform to reach 2,000,000 units anually. The EcoSport will be sold in Brazil, India and many other markets, it will be sold in over 100 markets.

The body of the EcoSport is built using newly developed techniques like boron extrication to help strengthen the body. This ensures a stiffer body which helps in cases of side impacts and at the same time offers better driving dynamics too.

As of now, we haven't been treated to a sight of the interiors of this SUV, but stay tuned for updates as soon as we do have the details!