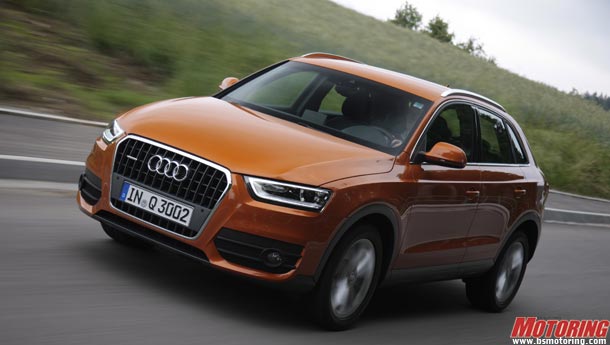 Audi's smallest, most affordable SUV offering for our market, the Q3, will be on display at the Auto Expo. And this one is unmistakably an Audi from the outside. Its gaping grille and LED adorned head/tail lights make sure to remind you that it hails from Inglostadt. There's no mistaking it for anything other than the younger sibbling of the Q5 and Q7, the only differences are apparent at the rear where the Q3 has a more sloping roof line and a steeply raked D-pillar.

It's smartly designed, too. It's got a coefficient of drag of 0.32. To put that into perspective, the McLaren F1, one of the fastest cars on the planet,has the same value. The lower the Cd, the better a car can cut through the wind, thus leading to faster speeds and better fuel efficiency figures. Stylish 17-inch wheels round out the exterior package.

On the inside, there's an interior that lives up to Audi's high quality standards. There may not be a lot of toys there, but what is there is of really good quality. There are a few spots in the interior where you'll notice some parts sharing from other VWAG group cars, but it's not really apparent at first glance. The MMI system is present here too, but the control knob has been relocated from behind the shifter to the center console. Apart from Comfort and Dynamic mode, there's a new Efficiency mode which you can select. This mode tells you when to shift and also tips you off on which parts are consuming the most energy. All in all, it's a nice car to be in, the Q3.

There are two 2.0-litre engines powering the Q3 for our market. The 2.0 TDI diesel will come with 170 bhp of peak power and the 2.0 TFSI petrol will come with either 170 bhp or 211 bhp of power. Unlike its main competitor, the BMW X1 though, the Q3 comes standard with the quattro all-wheel-drive system. There are a few clever bits here as well that will add to the overall efficiency of the car. For example, the flywheel will disengage during coasting to further save some energy. All that, combined with the low weight of the car, make for one efficient SUV.

The Q3 will be launched here by March of this year and will be priced slightly higher than the BMW X1 at around Rs 25 lakh. So get ready for some affordable luxury.