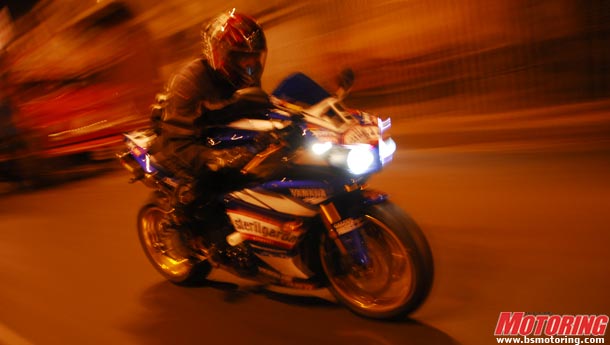 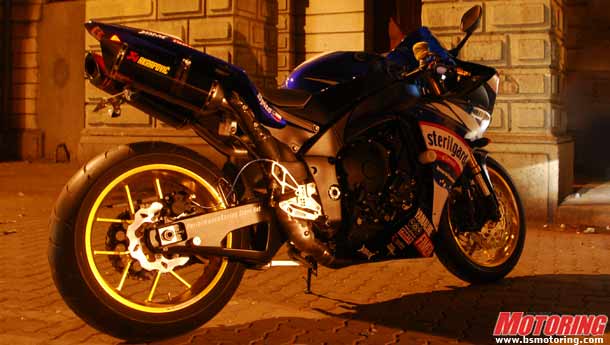 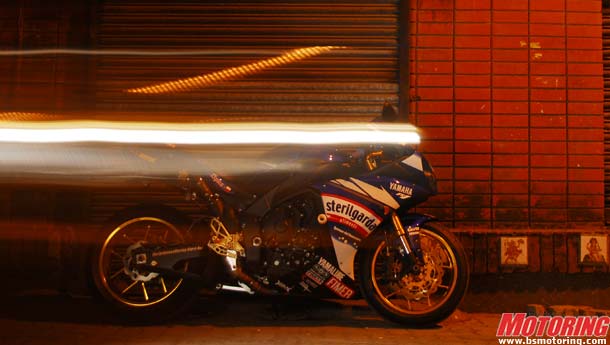 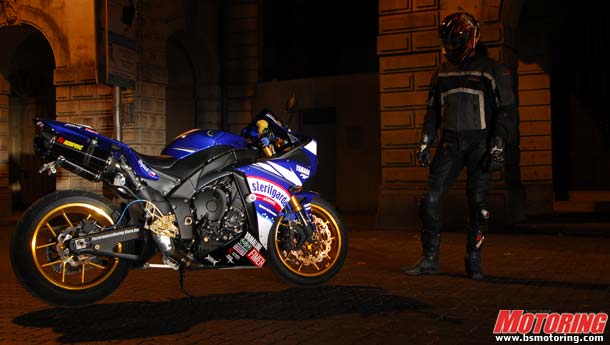 It's a special bike, all right. I'm riding through familiar deserted Mumbai roads at night. But they feel different on this bike; a race replica has a way of making everyday roads feel like a race track. Sidewalks transform into kerbs, buildings lining the road turn into grandstands and I turn into Ben Spies. Well, almost. The reason for this mirage-inducing nocturnal escapade is the 2010 Yamaha YZF-R1. Arriving in World Superbike as a rookie, taking the fight to the Ducati-equipped Noriyuki Haga and beating him for the title takes a special kind of man. And a special kind of bike too, a bike that is now available in India. Naturally, we had to take it out for a night on the town.

THE LOOK: EYE SPIE
Since the launch of the new R1, its appearance has been a contentious issue in many a pub. Why? Well, don't ask me because I think it looks fantastic. And don't ask those people either who appeared out of the night's shadows and milled around the bike well past midnight. The R1 looks like nothing else but an R1, and yet it's so different than what we've seen before. This bike's got my personal favourite headlights in the whole world. Those piercing orbs are hypnotic to look at, endowing the R1 with a more cobra-like countenance - like there's a brain behind those eyes that knows something that you don't and sees right through you. No wonder those people were drawn to it as if in a trance. It's definitely not feline in my book anymore. As is the case with all hypersports machines, the R1's form is dictated by function as much as it is by pure aesthetics. The stylish plastic work on the entire bike is a lesson in full-size minimalism - everything looks skimpy, but is actually substantial enough to be comfortable for the rider. And here's an amazing fact for you - the R1 is actually 15 mm shorter in length, 15 mm taller and exactly as wide as the Kawasaki Ninja 250R! Marvel of packaging, anyone? However, the tail light that nestles between the twin exhausts does look unimpressive and out-of-sync with the rest of the bike. The quality of fit and finish is typically Yamaha though - top-notch.

I'm sure that by now, you will have drooled over these pages looking at the Ben Spies replica paint job. The big number 19 at the front and on the tail section make sure you know to whom this bike is a tribute to. Italian food giant Sterilgarda's decals in addition to various sponsors names all over the bike and the subtle 'Spies' on the side complete the job. This being dear old Vicky Jaising's bike, it's got some really special bits on it. How about the Carrozzeria V Track forged aluminium wheels, for example? No stock wheels can ever look so cool! It's almost incidental that they reduce unsprung weight and make the R1 an even better handler than usual. Then there are the aftermarket wave pattern front brake rotors, hand and foot controls and a fantastic carbon fibre Akrapovic exhaust system. The overall impact of this bike is unbelievable. In the black and yellow night, it seemed as if Ben's own machine had lost its way onto Mumbai's Victorian era roads. All that's missing is a pair of racing slicks.   THE TECH: CROSS-EXPLANED
Manufacturers seem to have finally realised the fact that current litre-bikes are way too powerful for most riders. Now, their focus is on getting the power down as easily as possible. Power modes are the first obvious means to that end, but with the R1, Yamaha has taken that 'usable power' concept to the very heart of the 999cc motor. Hence, the MotoGP-derived crossplane crankshaft. While there's enough jargon involved in this design to keep the geeks busy for weeks, the essence of the idea is to slow down power pulses from the motor in order to allow the rear tyre to maintain traction with the road surface. For this, the crank now gets connecting rods set at 90 degrees from each other and an uneven firing order which in turn leads to smoother power delivery. You've heard the age-old practice of a marching platoon being asked to break their steps when passing over a bridge, right? This is sort of like that - spread the power apart to get it safe and sound to the other side without breaking traction. And there's enough power here to make that platoon surrender at the first roaring blip of the throttle. This means that the R1 is good even in an average rider's hands. In the hands of Spies, it won the WSBK title at first attempt. Obviously, Yamaha has gotten something very right indeed.

The liquid-cooled, 16-valve DOHC motor makes 180 bhp@12500 rpm and 11.8 kgm at 10000 rpm - ballpark figures for the litre-class. However, it's the way the engine now makes power that sets it apart from the crowd. And then there's the Akrapovic exhaust setup on this bike that frees up an additional 8-9 bhp and weighs a lot less than the stock system. Then of course, there's the ride-by-wire tech in the form of Yamaha Chip-Controlled Intake (YCC-I) and Yamaha Chip-Controlled Throttle (YCC-T). All this tech works well enough for me to have forgotten that it was there in the first place! It was only later that I realised that the crisp response is, in fact, the product of some super-trick gizmo-gadgetry. Might seem a bit too much on a motorcycle, but it all works well towards the ultimate objective - making the R1 fun to ride.   THE RIDE: GROWLING PROWLING
The R1, again, proves to be entirely unconventional. As soon as I'd fired it up, I had half a mind to get off the bike, pull apart that fairing and make sure that it is indeed an inline-four under the tank! The exhaust burble is more like a V engine and the thing's even got vibes! Don't get me wrong now - it's not vibes from the engine but the sound of the exhausts that passes through your limbs, adding to the thrill of riding the machine. So, the overall effect is that every twist of the throttle releases a guttural bellow from the Akrapovic amplifiers and the vibes are present in just the right amount at all revs. Downshifts prompted the Akrapovics to alternately clear their throats, provoking my mind to conjure up the image of two long flames erupting from the twin exhausts, singeing the darkness. That only served the purpose of making me want to twist the throttle even more.

Being impertinent with the throttle on a concrete road made the rear squirm under me as it struggled to find grip, but it was so controllable that even a first-time R1 rider like me didn't have to worry about it. And this was in Standard mode. In A mode you have even more power in the low- and mid-range, while in B mode, power is reduced to little more than 600cc levels of horsepower for reduced traction conditions. Noticeable, and in the conditions it's intended for, it should be a boon. However, since it wasn't a never-ending night with the bike, I chose to stick to Standard mode to get an unfettered feel from the R1. And what a feel it is! There is a constant feeling of seemingly limitless torque and grip at the rear wheel. And despite the relatively short wheelbase, the R1 never feels unstable thanks to the proven Deltabox frame developed from Yamaha's various racing programmes. What's good for GP circuits seems to work well on Mumbai roads too!

The grunty nature of the motor is again most uncharacteristic of a Japanese litre-bike. I had my doubts about Yamaha's claims that this is a bike with the bottom-end grunt of a V-twin and the top end of an straight four. But now, I'm inclined to agree. Throttle response is fantastic and it was made even more enjoyable by that unlikely soundtrack that followed me around on the deserted roads. The clutch action felt well-weighted and feel through the gearbox was excellent, though the brake rotors were brand-new and had yet to be scrubbed in. Consequently, there was little feel through the lever, though stopping power was there provided I hauled on the anchors with a vice grip. It did throw a rein around my right hand, but there's always next time (Are you listening, Vicky?!). Anyway, the R1's good for turning the night into an even darker blur by reaching 100 kph in little more than three seconds and setting the road on fire at 290 kph.   During my brief ride, I had just enough corners come my way to learn that the handling is sublime, even at low and medium speeds - turn-in is fantastic, grip from the fat 190 section rear is immense and the 206 kg weight feels like half of that on the move. What struck me was the drive out of corners - it launches from any apex like a cannonball that thinks it's a feather. Even the ride quality - that I expected to be back-breaking given its racing focus and pedigree - was impressive. Be it bumps, potholes or abrupt changes in road surface, the R1 handled all of them without getting out shape and tossing you off the seat. All of this translates to a level of handling that very few bikes in the world can match and way more than I could use on deserted Mumbai roads that have a knack for surprising you mid-corner. Though one needs to ride it on a track to be sure, I believe only blue-blooded GP bikes will outhandle this one. One thing is without doubt though - the combination of friendly power delivery and good handling make it an easy bike to live with, whether you're on the road or on the track.

THE END: WHY?
All good things come to an end. But why? Why did Vicky have to go back home? So what if it was 3 am? Such things were but trifles once I'd had a taste of the R1. And that's the whole point of the bike besides winning all comparisons, races and championships in sight - to give riders an unprecedented experience, something that will keep them coming back for more no matter what they've ridden before. We've seen Vicky wait for over a year for this bike and the look on his face says it all. This is the first R1 I've ridden and even I can tell that this is the most special R1 ever made. What Yamaha has done is create a Japanese litre-bike that feels more Italian than it has a right to. Isn't that quite the ideal concept - Italian soul with Japanese reliability? They can't really do better than that!

At around Rs 12.5 lakh, the R1 raised the eyebrows of the well-meaning policemen who accosted us during the shoot. The usual question and answer session later (Average? Cc? Speed?), one of them declared that such a bike was not right for India. Despite wanting to yell bloody murder into the policeman's ears and screaming that this is the basis of a genuine WSBK-winning motorcycle with MotoGP technology at its heart, sold right here in India (unbelievable, no?), I kept smiling, captivated by those headlamps for the hundredth time. Later, Vicky wheelied off into the night, that fantastic sound hanging in the air long after he was out of sight. Even Mr Cop would've approved. The R1 is now my favourite superbike and it's a special bike, all right.   MOTODATA
YAMAHA YZF-R1