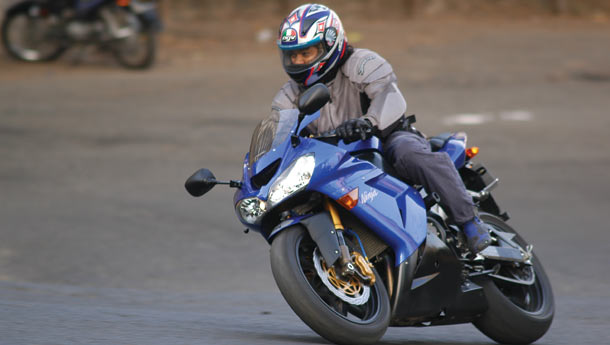 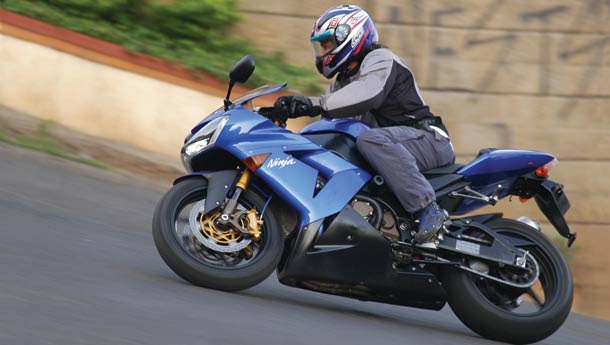 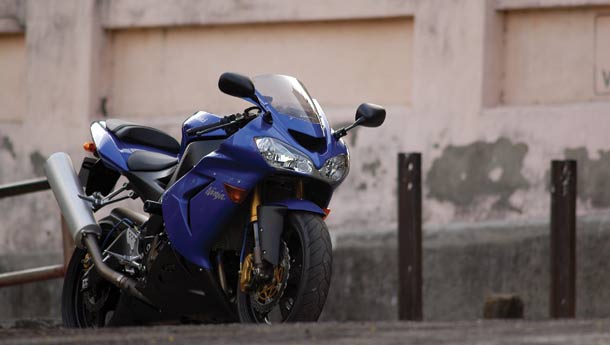 The scariest motorcycles I have ever ridden, in no particular order, are: the thundering ‘Headbanger’ Suzuki GSX-R750, the Yamaha RD350LC, the Yamaha V-Max and both the other 2004 big fours, the R1 and the Blade.

Twenty minutes ago, I thumbed the starter of the 2005 Kawasaki ZX-10R and the bike laid a black darkie crossing out all the names and is now perched menacingly at the very top of that list.

I roll off thinking ‘whatever dude...’ Negotiating a bumpy residential street, the ZX-10R seems civil enough, managing to keep the old gluteus fairly happy, the rubber on the tarmac and the growl low enough not to wake the still asleep.

Once on an open stretch, I snick second and whack the throttle open. That’ll be the last time I do something like that for this story. The revs jump in four-digit increments per second, and the amazing torque flashfloods down the driveline, taking no prisoners, recognising no boundaries and pulling no punches. The rear wheel spins up instantly. I notice that there was no time between 5 kph and 60 kph on the speedo. And that the rear wheel is slewing wildly about, unable to put the prodigious (and sudden) rush of power down.

Gently, then. This time, I roll the throttle open and another expletive splashes against my faceshield. Every slight twitch of the throttle sends ten or more horses instantly to the rear wheel. The ZX-10R will hit a hundred kph in just about 2.7 seconds if you have the balls to keep the throttle pinned in first.

This has a few side-effects. At about 1.5 seconds, the front wheel will be lofted way up high by the sheer force of the thrust. Before you can react to the new attitude of the motorcycle, the rear will also begin to spin simultaneously. And every object that got classified as, ‘Hazard, keep an eye out,’ seems to leap about half a kilometre closer instantly.

As you desperately hit the brakes to slow this manic rate of progress, you will feel a sensation similar to what pilots in multi-G turns in state-of-the-art fighters feel – a brown out. As the edges of the world go dark, you will now feel the rear end of the motorcycle flap like a chequered flag, as the instant weight transfer leaves you with a minor endo. The brakes are even better than the motor. Friendly with the bite but with enough power to dig a furrow into the tarmac as the front tyre bites down to a hard stop.   The 2004 R1 and the CBR1000RR will do many of these things but there’s a difference. They won’t force you to sit on the kerb and smoke a shaking cigarette in three seconds flat.

As you contemplate life at a much-better-thank-you zero kph, you realise that if you had an accent, white skin and lived west of Warsaw, you could basically roll up to a Green-coloured shop, put down the equivalent of US $11,000 or so and roll out on a machine that makes the most famous of roller-coasters look uninspiring, insipid and about as much fun as a ride to the shops in your aunt’s Fiat Palio 1.2 Sport.

It certainly isn’t as eye-pleasing as the R1. The Yamaha is a beautiful composition of curls, curves and muscle. The Ten is all business. From the busy front fairing to the meat cleaver rear end. The fairing boasts a ZX-RR style central modified NACA duct, widespread headlamps and some gorgeous detail on the screen. However, the effect the look has isn’t a smile. You get a dark, subliminal picture beamed direct into your brain from the Dark Side. If I were into bad puns (Oh, you’re not? - Ed), I’d say there’s no Darth of Vader-style detail on the Ten.

And it isn’t just the front-end. The mean, matte black frame spars are taller than Michael Jordan’s shorts. And the chunky swingarm, light-looking wheels and loud-for-stock titanium can (aluminium finish) all add to that impression.Kawasaki returned to the serious sportsbike game after letting the ZX-7R getting ever longer in the tooth, until it looked like a walrus. Meanwhile all the other 750s and 1000s had slipped into dolphin shapes and were cutting through air at far greater speeds and with far greater agility. The ZX-7R was being called the sport-tourer of the sportsbike class when finally, the men in green woke up.

Their task was unenviable. They had to measure up to and beat absolute legends. Neither the Suzuki GSX-R1000, nor the Yamaha YZF-R1 nor the Honda CBR1000RR were to be taken lightly. They were all pared down to minimum weight, they all handled like the world’s finest carving knives and they were to a fault, powerful enough to be seriously illegal at ten per cent throttle opening.   Understandably, nothing was carried over from the ZX-7R, save for the Kawasaki badge on the tank. And that they lightened until it weighed as much as a mouthful of hot air. The light chassis is made from thin-wall aluminium and the twin spars actually arc over the engine, making the Ten as thin as a 6RR. One mag superimposed the fronts of the Six and the Ten and discovered, they are actually almost identical!
At either end, top-flight suspension components were brought in. The front sports fully-adjustable upside-down forks, and Kawasaki went the Suzuki way and put DLC (Diamond Like Carbon) coatings on the sliders for the lowest stiction possible. The rear shock was the Bottom Link Uni-Trak style that is standard on all Kawasaki sportsbikes now.

The motor itself uses all the current buzzwords. It’s cast in one piece, has a triangulated configuration for minimum volume, twin valve throttle bodies, flat-top pistons, sintered-aluminium valve spring retainers, titanium valves... you get the picture. Kawasaki’s known for its brute power machines, and I think except for the Greencoats, everyone else was surprised at the 175 horses the Ten makes at the crank. Before you add the 9 more that enlist once the ram-air is brought into play at speed.

The result is a machine that is so fast around a track, that it would easily smoke Aaron Slight on a ZX-7RR at the 1993 (That’s just eight years ago, mind you) Suzuka 8-hour endurance race. With 20-odd bhp more on tap and a chassis that can handle it if you can.To combat the inherent wheel hop under braking from the seriously oversquare, high-compression 998cc DOHC 16-valve motor, Kawasaki opted to include a slipper clutch. And something tells me, it wasn’t a customer delight item. It was an absolute necessity.

Anyway, my hands have stopped shaking and I think poor Neil is already wondering if I’ve nicked the Ten and gone off horizon hunting. Heading back, I make the gentlest use of my right wrist in all of my thirty years. Suddenly, the Ten becomes a lot friendlier. It’ll pootle at part throttle forever and actually seems to run smoothly, ears folded flat, a gentle purr issuing from the pipe.

Then I get it. The Ten doesn’t demand and require respect, it gets it. As one Australian journalist wrote after his first ride on the Ten, ‘This bike suffers no fools... you’d better make sure your riding skills are really what you think they are.’ This from a chap who lays darkies as easily as I botch the transfer of my sunny-side ups from the frying pan into the plate. The Ten makes you want to write dark hued articles with sentences like, ‘If the Grim Reaper was ever part of a motorcycle club, he’d ride a ZX-10R,’ packed thickly into them.

Keys returned to Neil, I realise that I am not alone in this trial by fire sort of introduction to the Kawasaki. When Neil first took the bike out for a highway jaunt, he spent a lot of time with only one wheel on the ground, ‘the front wheel would come up in first, second and third gears even at part throttle. And it does 145 kph in first! I finally gave up on a full throttle blast after the bars went slowly from lock to lock on the throttle in fourth!’
Already British mags are buzzing that the ‘05 GSX-R1000 is even more accomplished... As I watch the bike growl away, I cannot imagine how any sportsbike could be better than this one.