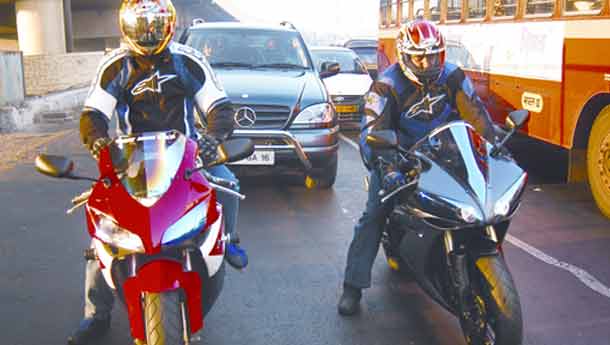 Yamaha classified the 2004 R1 as a revamp. Liars. Already regarded as the most breath-taking of Japanese machines, the new 2004 R1 was even better. It had  MV Agusta F4 cues all over and the sleek, sweet looks were half the story. The compact, new engine had cylinders closer together and leaned so far forward, the crankshaft could get its knee down in a flash. The matt black chassis swept over the engine making it noticeably slimmer than the Blade. The chassis had jewel-like extruded bits. Superb fuel injection and twin under-seat cans equalled 172 bhp, without ram air – an amazing 1 bhp/kg power-weight ratio.

When you’re in the saddle,the bike feels narrow and controllable. And that has been  the R1’s hallmark for the past two years. Most road tests agree that the slick fuel injection, stable chassis and the rich feedback of the R1 makes it one of the most tactile and enjoyable motorcycles ever made. The fact that it also makes a handy 180 bhp, helps a lot.

The 2004 Honda CBR1000RR was all-new and the biggest change had been in the brief – the long-worshipped ‘streetbike first, racer later’ paradigm had been kicked out of the studio to a hard butt-first landing. Riders wanted to be seen on back-breaking race-reps.The CBR’s motor grew to the full 998cc, and Honda chose a torquey power curve over a top-endy screamer. The form of the power curve, and the bike, are RCV inspired, just like the compact monoshock, the roll centre-mass centralisation concept and the utterly transparent (and amazingly effective) electronic steering damper. The chassis too has RCV inspired bits, the most visible being the massively braced swingarm and the underseat exhaust routing.

Like the RCV – I’m referring to ride reports here – the CBR turns in very quickly, belying the 7 kg extra it carries over the R1. It’s stable mid-corner and the linear build in power allows you to use every horse on the exit. Honda endowed the bike with a cassette type gearbox and a 40 per cent larger radiator with racing in mind.

Suffice to say, Honda managed to make it plenty fast. However, more than a few riders rue that it lost the feisty streak of the 2003 Blade.

Vivek and Prasad enjoy customising their machines. If you haven't already noticed, both bikes are dressed like they're headed to Oscar's red carpet. The R1 wears blue iridium screen and matched headlamp covers, Termignoni slip-on cans, carbon- fibre chassis and clutch covers, crash bobbins, custom hugger, paddock stand mount and tail tidy kit. Plus a number of small blue anodised bits. The CBR1000RR, not to be outdone, has a rainbow iridium screen with matched headlamp covers, Devil slip-on can, crash bobbins, CBR1000RR grips and tank scratch pad, LED indicators, LED rear peg hangers, hugger, tail tidy kit. Together, they reckon, they've both spent about 10 per cent of the price of the bikes on the custom bits.

Our ears really perked up when the two started talking about riding gear. Top flight riding jackets, helmets and boots are available and they’d be more than happy to sort you a set as well. Obviously, prices vary with how stylish and expensive the bit of kit you pick up is. Vivek also showed us a Valentino Rossi official T-shirt from the MotoGP collection. Now you guys go check out the website, while I collect the cash for the Vale|46 Tee.