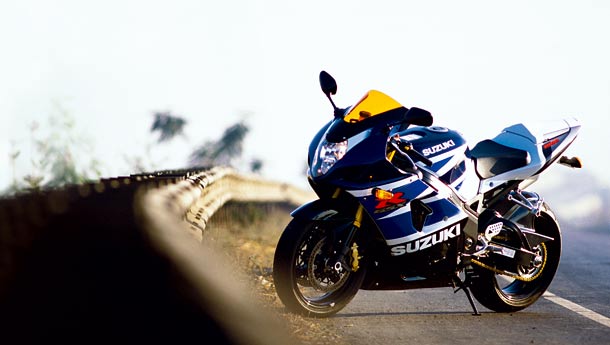 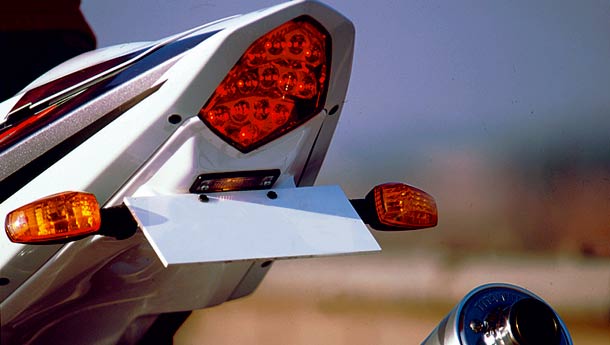 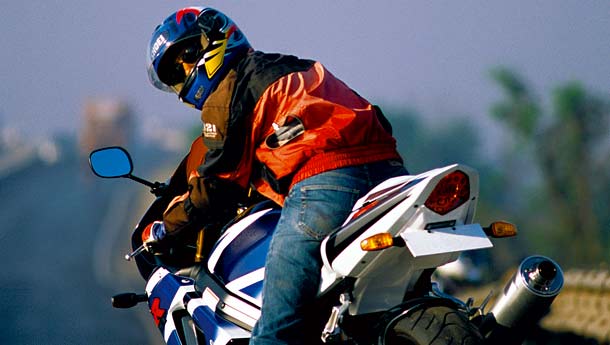 If you haven’t noticed it already, we’ll just up and say it. The 2003 Suzuki GSX-R1000 is a cat. It shares most of the characteristics of the feline family and then some. Now you might think it ludicrous to have the most powerful litre-class sportsbike (in 2003) to be referred to as a tabby cat, but that is just how absurd the situation really is.

Get this, for instance. Throttle rolled to the stop, bum off the seat, body weight as far forward as it will go, I feel only the essence of the big Gixxer’s fearsome acceleration as the two of us thunder down this unused stretch of road at well over 200 kph. In fact, unlike my previous stints on various bikes, I roll off the throttle only when I think I’ve gone fast enough for the day.

And no speed buzz, even! A phenomenon probably caused by the flood of incoming data that comes with full bore acceleration that overwhelms the brain’s ability to process it. Sort of like alcohol, or MS Windows,  whichever way you like to swing. But this Gixxer is so tactile, stable and  returns enough feedback to keep you feeling in control and easily absorbing the world as it blurs by in double-time.

All this despite the fact that I’ve only been on the bike for a few minutes so far. I’m so comfortable! Already, I am beginning to see why the big Gixxer conquered every Sportbike of the Year award in 2003. To put a little background to it, the Gixxer evolved from the previous years’ bike with a few, critical mechanical changes. The tweaks begin from a new 32-bit ECU and 256 kb ROM which ace the eight ignition maps and eight injection maps. Then there are new throttle bodies to feed the better measured and timed fuel into the cylinders. The pots themselves get vent holes to cut pumping losses and there are lightened camshafts and a counterbalancer to complete the picture.   All this results in an amazingly quick-revving four cylinder motor that is stronger than Hercules, makes 165 bhp (in a relatively mild state of tune – racebikes routinely see 190 bhp!) and most importantly, being the longest stroke motor in its class, produces a furious torrent of torque that usually proves fatal for the competition.

The result is a production sportsbike that makes as much power as most open class racers and allows the experienced rider levels of control that approach God status. As the road tests say everywhere, it’s so good, you’ll look like a hero.Power, however, is nothing without control, the Pirelli men will have you know. The chassis too is almost all-new. The cast steering head and swingarm pivot are joined by extruded alloy spars with internal ribs, which allow more control over tuned flex. The new ‘Zook also gets a coating three times slicker than Titanium Nitride on the sliders up front for less stiction, called Diamond Like Carbon. This allows the ’03 to have stiffer springs, more compression damping and loads more rebound damping. Et voila, a nice supple ride quality. The same sort of work on the rear Kayaba shock cuts friction by 60 per cent, and Suzuki claims that the reduction in friction at both ends improves the rider’s sense of what the contact patches are doing.

The new chassis isn’t the quickest package in the game. But its superb stability, combined with a transparent throttle-to-rear wheel connection, makes for a hugely controllable package. Laying darkies should be easy as pie with this level of power and this much control.The engine and chassis unite in an absolute monster of a machine, which will pull from 4,000 to 11,000 rpm seamlessly, with ever-rising urge until the bright blue-white shift light calls for the next gear. Seeing the electronically limited top-speed of 296 kph is alarmingly easy and even short-shifting into top gear can often have you loping along at blatantly illegal speed. No, I’m not going to tell you how I reached that conclusion.

And it’s not cat-like in dynamic ability alone, it’s stealthy as well. The enlarged stock titanium can (with a light aluminium cover) is almost silent. Toodling along, the bike is nearly inaudible and it’s only when the revs are up that the four-stroke howl really comes through. Perhaps the nicest noise it makes is when you let the revs drop to 3,500 and then slam it wide open – a mind-blowing vortex of induction roar ensues before the counter crosses four large and zaps you forward with a solid kick up the behind.

Things never get out of hand, thankfully, and the MotoGP-spec radial brakes provide enough retardation and feel to allow Suzuki to reduce rotor size for 2003 and provide only a pair of two-pot Nissin callipers. Like the rest of the motorcycle, they aren’t the sharpest, but feel is excellent, they’re supremely user-friendly and once they’re biting, the numbers tumble off the digital speedo in a massive hurry.   To go with the new ram-air ducts and increasing criticism of the ever-older looking Gixxers, Suzuki replaced the smiley headlamp with a ‘Busa-like vertical cluster, which is distinctive (and allows the ram-air ducts to come closer to the centre, where the air pressure is the highest). The reshaped tank and tailpiece, with the gorgeous LED tail lamp give the bike a stubby, crouched look that is totally in sync with the rest of the package. In short, we like. We like very very much, indeed.

And did I mention it’s not quite the legendary wrist-killer it used to be and is in fact, quite a comfy bike? Looks like Suzuki thought of everything. It also looks like the competition will have to be really, really good to beat the superb Gixxer. So if you really like the 2004 R1 (and I do), you probably have this particular big cat to thank for raising the bar.

It should be obvious by now, that this Gixxer is the most impressive big bike I’ve been on till date (despite my known soft spot for the R1). Its feline ability to never put a foot wrong, to make no uncontrolled movements and sheer monster power are pure adrenaline. And we still have to put in words the mild, nitrous injection-like effect of ram-air past 9,000 rpm in the top three cogs. The Gixxer offers an outstanding ride by keeping the rider fully aware and coherent, while his own throttle hand wreaks all manner of havoc in the space-time continuum. It’s a control freak that offers freaky levels of control.

I am so in awe of the sheer width and depth of its ability that I probably wouldn’t consider it highly unusual if I found a dead mouse in one of the ram-air ducts  of the Gixxer. And a thank you note in the other.

Have you ever clung to the booster rocket that flings a space shuttle into orbit? No? Don’t worry about it, there’s light at the end of the tunnel. Get on the Suzuki GSX-R1000 instead. It’s smaller, cheaper, lighter, better looking, better sounding and probably just as fast. There’s also the added benefit of not being toasted to a crisp at lift-off, plus the fact that the Gixxer will show the rocket a thing or two in the twisties. Seriously, this is an absolute monster of a motorcycle, and not for nothing has it been voted Bike Of The Year three years running. It’s laughably quick, incredibly sure-footed and will give you the mother of all speed buzzes. Now, if only they would add an afterburner to it...
– Pablo Chaterji