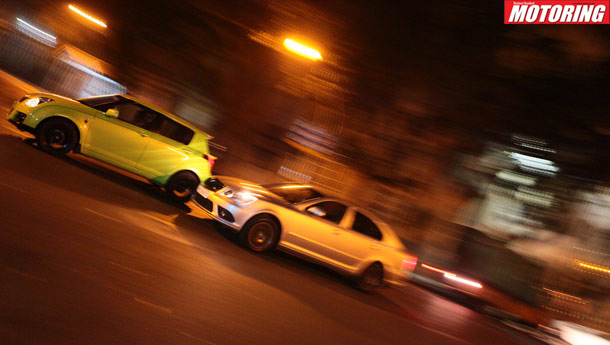 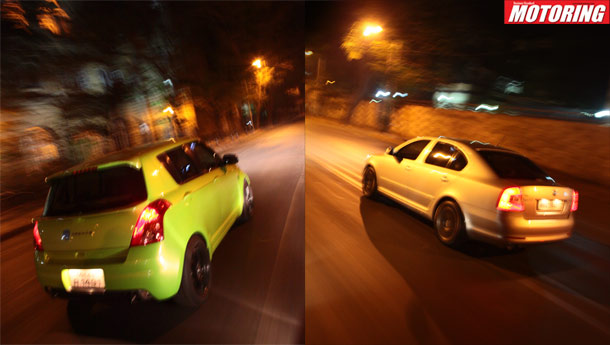 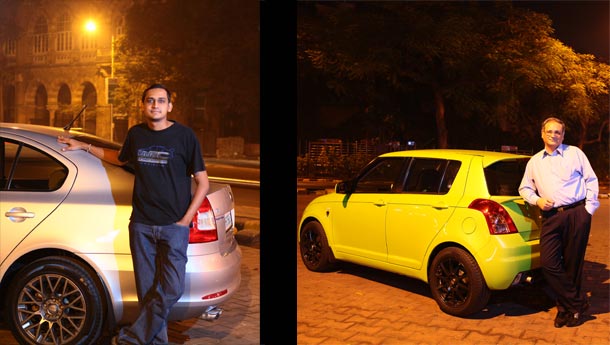 The usual humdrum cars. The usual performance characteristics. And the usual story-telling. Clearly, if there’s any way to break the monotony, it is to get two, very fast cars, but with a twist. One is a hatchback that has so much horsepower that most cars with badges like RS, M and AMG may find themselves running neck-to-neck with it. The other looks like any other production car on the street, except that it packs a punch of its own. Both make over 200 bhp, both with differing characters and so we had to get Ruman and Rohin to slug it out and figure which one is the better machine.

RD: So, you got yourself a big, fancy, Skoda, eh? Well, meet this – it’s called Goblin, and it’s a roughly-200 bhp Maruti Suzuki Swift. It’s got race-ready handling, an absolutely nuts motor and with dimensions like these, it eats sedans for breakfast, lunch and, whatever is left of them, for dinner. I’m a motorcycle guy, you see, and I know the importance of quick handling and compact dimensions – the smaller your car, the easier it is to squeeze past the endless traffic jams on your commute. Show the Goblin some twisties, or a racetrack, and watch how it leaves your Skoda-with-a-boot far behind. And hey, what’s the point of a fast car that doesn’t look the part?

RN: Heard of sleepers? They are the ultimate way of letting one know who is the boss, without shouting from across rooftops. Boys drive rice cars, men drive sleepers. And let me also tell you, the Laura nee Octavia is a platform that is known to produce as much as 600 bhp from a mere 1.8-litre engine, so this will eat your hatch for an after-meal mint and spit it out of its exhaust, forget your whole course meals! It’s not got to do only with small dimensions; stability and predictable handling, on account of a longer wheelbase come into play too. And in a Laura I won’t be spending time overcorrecting (like you would in your hatch) when I hit a bump on a twisty stretch; I’ll just let the suspension tackle them like it were a mound of marshmellows.

Going the whole hog or taking the ‘light’ way out?

RD: Predictable handling is for the weak – aren’t fast cars nothing without driver skill? It’s only obvious that you, with your boot, mood lighting and soft-touch-everything leather interior will watch out for things like bumps – I will simply swerve around them and still be faster through corners. And here’s the deal: the Goblin was bought for Rs 2.5 lakh, used, and then money that would buy you a boring stock Czechoslovakian sedan was spent on every single aspect of the car. A Haldex ECU, a re-done cylinder head, JP forged pistons, lightened and balanced crank, rod and flywheel, crafted-to-perfection hyper plugs, injectors... we’re barely halfway through yet... a Garrett GT20 turbo with that seductive blow-off valve, BMC air filter, custom-made exhaust right from the head, an Exedy Stage 2 clutch... and I haven’t even told you about the suspension specifications! Oh, and isn’t that vRS badge a bit of a joke considering they only charge you extra for some body kit and no power boost? Suzuki, my friend, has made legendary cars like the, er, well, ugh, never mind. Skodas are for real estate blokes and political upstarts. The Goblin is all about brutal performance for the hardcore enthusiast. ’Nuff said.

RN: ‘What’s power without control?' said a wise man. And a Pirelli print ad eons ago. I don’t want to spend all day trying to control an uncontrollable horse and in the process get nowhere. Which is why the Laura is perfect. You see, this one isn’t an RS – no siree! It’s a base Laura 1.8 TSI with a vRS front bumper, an engine remap, a performance air filter, couple of ‘hot’ sparkplugs and KW suspension. Nothing much, but enough to bump up power to 210 bhp from the stock 150 bhp. And all of this for the price of a vRS, bought stock from your local Skoda showroom. Your Swift upgrades are worth as much as this Laura; stock car plus upgrades included! Clearly, more bang for the buck rests with the Laura in this case. Plus, Skodas have a reputation in rallying across Europe for decades; Suzuki for not even a decade! And you know what – the suspension here is even more pliant than a regular Laura, yet it handles like a dream. Duality of this sort... hmm, your Swift can’t boast of this now, can it?

RD: Saying Skodas are better at rallying than Suzukis just because they’ve been around longer is like saying Nayan Mongia is a better cricketer than MS Dhoni. They aren’t and he isn’t. And who said the Goblin is an uncontrollable horse? It’s nearly race-ready (with the exception of a roll-cage – and hey, this one’s got stock rear-seats and, erm, door panels too!) and there is no hint of body-roll or understeer even at speeds in excess of 100 kph! And raw power, my friend, is beyond simple mathematics. This car has got soul – it doesn’t wear a Verde Ithaca coat of paint from Standox (Lamborghinis, if you’ve heard of them, wear exactly that shade) for nothing. Also, we’re running Sparco Assetto Gara wheels, chunky but wise 205/55 R16 tyres, TEIN Super Street coilovers at the front and – wait for this – an EDFC (Electronic Damping Force Controller) unit that offers 16 damping settings... ON THE FLY! Oh, and I can ferry the in-laws just as comfortably as you can, and my exhaust note makes for much better audio than your 1 million beats per minute electronic garbage. Wait-a-minute – I don’t have in-laws to ferry in the first place! More power to me, then.

RN: I’m not sure how often that Swift will ever be taken to the track; I’m no fan of the Verde Ithaca nonsense either. Forget understeer here, because the KW coilovers really make one heck of a difference when combined with Pirelli P7 rubber. Sure, it doesn’t have a gazillion changes, but who needs to do that when the basic ingredients themselves are so good. The Magnaflow Catback exhaust combined with the Forge blow-off valve sounds discreetly serious, so those who appreciate a nice car always let out a warm smile when this one passes by. As for being able to ferry in-laws? Hah, it means I don’t need a second car in my garage and therefore don’t need to pay more to maintain two. Tch tch!

RD: Hey, all hardcore car enthusiasts have at least two cars, okay? And yes, you’re right about the public reactions when you pass by in your Skoda. ‘Sweet chap’s gonna be eaten by a Swift – shame!’ is what will follow the warm smiles, I assure you. That said, there’s no denying that your car has the upper hand on creature comforts. Sadly, I have cold-metal trim and warm lighting even in my bathroom, so when I’m driving, I’m purely in sync with the elements instead of being comfortably numb. With my motocross genes, I don’t like to be pampered and nannied too much, so the Goblin fits me like a glove. And you don’t need me to tell you that the Swift has won’s BSM’s car of the year award twice, right?

RN: Not that the Laura and its erstwhile cousin, the Octavia haven’t won awards now, have they? As for pampering, well the Laura just manages to do that as well, and then yump across a road with an elevation. It’s as hardcore as things get – just in a more refined package. And refinement doesn’t mean it lacks feel. Heck that steering talks more to the road, while your car kind of gets into an argument. Don’t even get me started on the number of times things fall off on your Swift, or the fact that your bumpers come off their clips with a ‘mere’ nudge. So, while you are busy tweaking and fixing screws, I’m long gone into the distance, spending more time driving and therefore enjoying myself than you would.

RD: The Goblin is, perhaps, better put together than it was even when it rolled off the production line as an ordinary Swift. I agree, being race-bred means it won’t be as reliable as your Skoda, but fixing that monster of an engine will still be far less expensive than buying a replacement electric mirror for the Laura (your car understeers a lot, doesn’t it?). As for the steering on your car, well, isn’t it supposed to talk back to you more than to the road? Even my neighbour’s three-year old daughter can do a better job of making a car’s steering less numb and synthetic! Right from wheelspins in every gear to incredible cornering agility, the Goblin has FUN-TO-DRIVE written all over its bodywork in invisible ink. It’s a proper boy-toy, the Goblin – a howling mad race car for the streets.

RN: Sure enough, both our cars are front-wheel driven. But then the Laura just somehow manages to plant a smile on your face, every time you drive it. It’s a more mature, rounded package, but still provides enough fun as long as you are willing to invest in it. What’s more, the 50 bhp gain and the improvement in handling is worth a well-used and abused regular Swift, so it’s exceptionally worth it. Fun-to-drive need not necessarily be something with war paint and lots of body kit; it just needs to be fast enough and a complete riot to drive. That, this Laura certainly is.